Nero Continues To Fiddle While Rome Burns: Part I 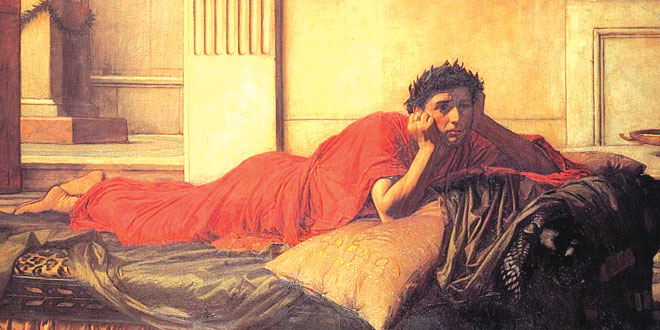 Roman Emperor Nero, during his reign, occupied himself with unimportant matters while neglecting priorities during pending crises, much like our 112th Congress, which spent much of its time preoccupied with bickering and posturing with their counterparts and contemplating what a woman should be allowed to do with her body while avoiding passage of legislation that would guarantee a woman’s constitutional right to equal pay for equal work. Congress grudgingly avoided the “fiscal cliff,” but failed to address the major issues that confront our great, but struggling nation. Only when forced to vote last-minute legislation did they do so with reservation and minimal cooperation. The result was an incomprehensive legislative package that provided permanent tax relief to 98% of tax paying Americans without providing a means to pay for the additional increases to our annual budget and massive spiraling debt. Most importantly, it failed to address the major programs that are in dire need of modification which include income tax, Social Security, Medicare and immigration. Nor did it address alterations that need to be made to Medicaid and to our new universal healthcare program and taxpayer-funded government pensions and benefits.

There is no question that the “fiscal cliff” compromise was a step in the right direction for it avoided a catastrophe. During this stage of our frail economic recovery, there is little doubt that our current rate of taxation for most Americans had to be retained, that unemployment benefits needed to be extended and that taxes on capital gains needed to be raised for the top two percent. And, considering the middle class will most likely be expected to bear additional future hardships, it is fair to expect the wealthiest in our society to contribute a little more of their incomes.

What is not just is the unreasonably low five million dollar inheritance tax limitation and the permanency of the continuance of the Bush tax cuts for the remaining 98% of taxpayers. Many economists believe funding for the latter continuance unsustainable and the tax reduction should not have been made permanent, but instead, should have been linked to GNP and phased back to the Clinton tax rate once the economy has fully recovered. The inheritance tax threshold, one of the most unfair forms of taxation, should have been set at a much higher level. I realize that many of the wealthiest Americans have used every tax shelter available to accumulate wealth, which further illustrates the need to reform our current tax structure. But, this should not prevent the raising of the limitation of a tax that penalizes wealth accumulation when earned and again upon death.

As for continued discontent among our representatives, compromise rarely satisfies both parties. Our governing forefathers designed our current system of government to function in a manner that would ultimately result in concessions to majority rule. The events leading up to our fiscal cliff calamity illustrates that Congress has ignored this form of statesmanship and opted instead, to play a very contentious chess game with the highest of stakes wagered, the sovereignty of our great nation. A game too often played by career politicians whose every move is cunningly predetermined by special interest overseers who benefit from their participation.

The next major obstacle that faces our administration and Congress is the raising of the debt ceiling. I would like to think that congress has gotten the message and will work diligently to arrive at a consensus that will allow the ceiling to be raised without frightening and destabilizing our markets and disappointing nations that look to America for stability and guidance; an agreement that broadly addresses our spiraling deficits and massive debt in a comprehensive, progressive and fair manner. However, currently there is no indication this can be achieved within a two month time period. Although I believe we should not continue to kick reforms down the road, for this mortgaging of the future poses an equally serious risk to our credit rating, our standard of living and our nation’s sovereignty, I do not believe we should hold the debt ceiling hostage, for this too, possesses serious consequences.

If the President resubmits a balanced approach which introduces spending cuts that are fair, progressive and non-punitive to any one sector, I believe Congress should work to implement these reforms. If our President fails to meet these expectations, Congress has the responsibility and ability to introduce and pass legislation that will address these concerns. This is why our constitution created three distinct branches to balance power.

If our senators and “congressmen” disregard party lines and decide to talk with one another rather than at one another and seriously take time to collectively and rationally consider solutions to our fiscal crises, the path will be difficult, but not impossible to navigate.

Should our representatives fail to address and collectively work to correct the problems that confront our great nation, we should consider replacing every member of Congress when their term is up. This would send a clear message to our representatives that we hold them individually and collectively accountable for providing legislation that will defend our country, strengthen our economy and guarantee our sovereignty. It will unequivocally convey that continued confrontation and failure are no longer acceptable and that “we the people” expect our representatives to honorably discharge the duties of their office. In the future, we should never again vote for a politician who has pledged a commitment to any one person or entity. Such pledges, should at best, be considered disloyal, and at worst, treasonous which is defined as “a violation of the allegiance owed by somebody to his or her country.” Voters have the indisputable power to periodically remind our representatives their commitment is to our country and not to individuals, to special interests groups or to self-serving agendas. Such a voter response would certainly indirectly impose term limitations, a restriction that will never be passed by self-serving politicians who fail to understand their tenure is temporary and not a career entitlement.

Regardless of party affiliation, all Americans should encourage our President and Congress to reconcile differences and collectively choose the correct path to prosperity. Should they fail, every generation will bear the unimaginable consequences.