Neale and Manchen Co-Presidents of NPC 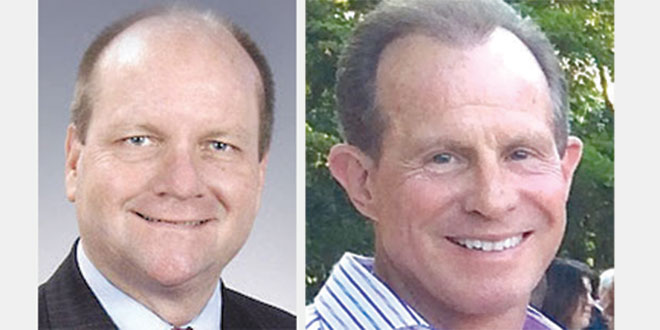 Patrick Neale and Craig Manchen were elected to lead Naples Pathway Coalition as Co- Presidents by the NPC board of Directors. John Coffey was elected Vice President/ Secretary, and Sean Nolan was re-elected Treasurer.

A longtime Collier County resident, Pat Neale practices law in the areas of business, contracting, real estate, and bankruptcy. He is also the president and owner of Lucera, Inc., a firm dealing with plastics, chemical and specialty petroleum products markets. He has traveled extensively and is an active member of the community who serves on numerous boards and has received many awards for his distinguished service. Pat is a 1992 graduate of Leadership Collier. He is also an active recreational cyclists with a couple of centuries under his wheels. Pat graduated from the University of Miami with a BS in Chemistry and a JD from the University of Miami School of Law.

A former business owner from Novelty, Ohio, Craig Manchen is a part-time resident and serve on the boards of several private companies and the steering committee of the VeloSanCancer Fundraiser. He is an avid cyclist and a reigning champion of the 2015 National Senior Games in Minneapolis where he took gold in the 40k road race. Craig holds both a BS in marketing and an MBA from Ohio University.

Pat and Craig succeed Jane Cheffy who resigned in order to devote more time to her burgeoning law practice. Jane remains active on the NPC Board working on advocacy issues.

The first order of business for the new administration is to set 2016 organizational goals and to update the 2015 NPC Advocacy Action Plan.