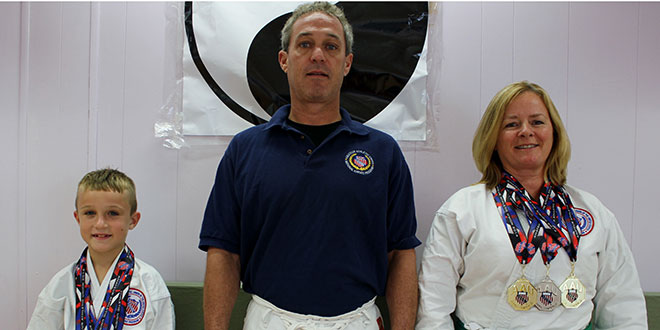 The 2014 National AAU Karate Championships were recently held at the Broward County/Greater Ft. Lauderdale Convention Center with over 1600 participants and 4 members of the Greater Marco Family YMCA Shima Dojo not only medaled but 2 are now Double Gold National AAU Karate Champions. Under the direction of Sensei Nick Lemke, Seibukan Karate Students Chase Polley won the Gold Medal in Kata and Kobudo in the 5-12 Division, Laurie McCardle won a Gold Medal in Kata and Kobudo and also a Silver Medal in Kumite. Santino Galvez also won a Silver Medal in Kobudo in the 5-12 age groups and Ford McKee won 2 Bronze Medals for Kata and Kobudo. Sensei Nick Lemke talked about the group’s achievement and explained what the 3 terms mean.”  Kobudo is the martial arts weaponry systems that originated on the island of Okinawa,

Kata is a Japanese word describing detailed choreographed patterns of movements practiced either solo or in pairs and Kumite is literally translated means “grappling hands” and is one of the three main sections of Karate training, along with Kata and Kihon. Kumite is the part of karate in which a person trains against an adversary, using the techniques learned from the Kihon and Kata.” Kumite can be used to develop a particular technique or a skill (e.g. effectively judging and adjusting one’s distance from one’s opponent) or it can be done in competition.” I am so proud of all of our Seibukan Karate students and where we began 3 years ago with the start of the program and what has been accomplished in this short period of time. The Greater Marco Family YMCA Shima Dojo offers many classes in Seibukan Karate, Matayoshi Kobudo and will be offering monthly self- defense classes for women this fall.