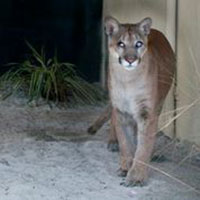 Naples Zoo officials announced today they are breaking ground on a permanent home for a young Florida panther that cannot be returned to the wild after it was blinded by a shotgun blast. This new panther exhibit will focus on expanding public awareness of the issues surrounding the growing number of cats in the area. And to meet the increased need to care for injured or orphaned panthers, Naples Zoo is also creating habitat space to provide temporary care along with an all-new large animal veterinary clinic. This is part of a cooperative effort with the US Fish and Wildlife Service (USFWS) and the Florida Fish and Wildlife and Conservation Commission (FWC) to meet their needs in recovering the state’s panthers. The new exhibit is slated to open later this summer.

The Florida panther that guests will see at Naples Zoo’s new exhibit is an approximately 2-year-old male rescued in October by FWC biologists. After surviving a shotgun blast to both the face and hindquarters, the wounded and blinded cat may have been surviving on road kill for up to six weeks before he was found. He received urgent care at the Animal Specialty Hospital of Florida followed by critical care at Tampa’s Lowry Park Zoo. The panther was named Uno as he was the first animal treated in their new veterinary hospital. FWC is still investigating the shooting of this panther.

Naples Zoo at Caribbean Gardens is a 501(c)(3) nonprofit organization cooperating in conservation and education programs both in and outside the wild for endangered species. For more information, visit www.napleszoo.org or call (239) 262-5409.