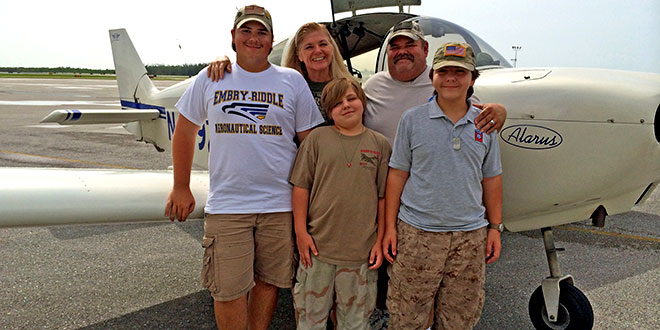 John, Joshua and Jacob Beauvais, with their parents Sabrina and Brian, earned national honors for their volunteer work with the Naples Chapter of the Experimental Aircraft Association, based at Naples Municipal Airport.

What started for the Beauvais family as a pancake breakfast eight years ago at Naples Chapter 1067 of the Experimental Aircraft Association has blossomed into national aviation honors. They were presented the 2014 EAA Young Eagles Award for Outstanding Ground Volunteers during EAA AirVenture Oshkosh, known as “The World’s Greatest Aviation Celebration.”

The Beauvais family, including parents Brian and Sabrina, John, 17, Jacob, 14 and 12-year-old Joshua, helped revitalize Chapter 1067, which is based at Naples Municipal Airport. The family’s aviation passion inspired Chapter President Ted Brousseau to nominate them for the national award.

“They pumped new energy and enthusiasm into our chapter,” Brousseau said. “A little over two years ago the chapter was at the lowest of lows.”

Brousseau said the Beauvais family, dubbed the Gang of Five, is always available to help at the airport. He cited a time this year when the EAA brought a 1929 Ford Tri-motor to the Naples Airport. The family cooked hot dogs, brats and hamburgers and served drinks during the three-day event. They also worked on the flight line.

“The Beauvais family jumped in and basically filled every position on the ramp, and we were told that the Naples tour ended up breaking the record for Tri-motor flights,” Brousseau said.

Brian is now Chapter 1067 vice president and John, who is working on his private pilot certificate, will be eligible to be the Young Eagle coordinator when he turns 18. John made his first solo flight on June 6, the 70th anniversary of D-Day.

The nonprofit EAA was founded in 1953 to grow participation in aviation and now has more than 180,000 members in 100-plus countries. The Young Eagles program was launched in 1992 to build the next generation of inspiring aviators. Since then, more than 1.8 million youngsters, from 8 to 17, have enjoyed flights from EAA volunteer pilots as an introduction to aviation and the careers it offers.

The weeklong AirVenture event brings more than 10,000 aircraft and 500,000 people from more than 60 countries to Oshkosh, Wisconsin, for aerobatics displays, informative programs, hands-on workshops, entertainment and exhibits of aircraft spanning all eras of flight.

All funds used for the airport’s operation, maintenance and improvements are generated from activities at the airport or from federal and state grants; the airport receives no property tax dollars. The Florida Department of Transportation values the airport’s economic impact to the community at more than $273 million annually.