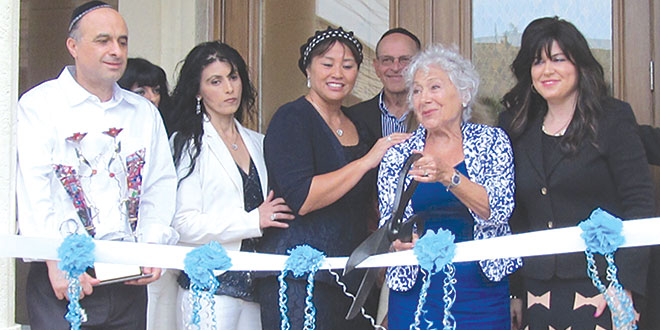 Jewish law states that building a mikvah is more important to a community than building a synagogue and that even a community’s most treasured assets such as the synagogue and the Torah scroll may be sold to raise the funds needed to build a mikvah. (A bath used for the purpose of ritual immersion, literally means “a collection,” generally a collection of water.)

When Sally Aaron of Marco Island learned that the women of the Chabad of Naples community were traveling to Miami once a month to use the closest mikvah, she found that “unacceptable” and donated a substantial amount, sufficient to begin the two-year process: a year of planning and a year of building. This culminated in the ribbon-cutting ceremony on March 17. Aided by two other local families who are contractors, the Elias Brothers and the Yitzchak family, the team worked steadily to construct a world-class, spa-like structure on the grounds of the Chabad campus.

Sally Aaron, Rabbi Fishel Zaklos, and Roni Elias with the dedication plaque during the opening of the Naples Chabad mikvah. Sally Aaron donated the funds, the Elias family spearheaded the construction. SUBMITTED PHOTOS

and ribbon-cutting witnessed by an audience of over 100 people, Rabbi Fishel Zaklos and his wife Ettie honored Sally Aaron and the Elias and Yitchak families by presenting them with Israeli art candelabra. The mikvah was dedicated to the memories of Sally Aaron’s husband Willard and the mothers of the Elias and Yitzchak families.

Following the ceremony, guest speaker Shimona Tzukernik ‘s theme of “The Kabbalah of Intimacy: And the Waters That Keep the Fire Burning” furthered the audience’s knowledge and both men and women were heard stating they “wished she had gone on speaking all night!” Her personal anecdotes and references emphasized both the practical and spiritual sides of the mikvah.

Water is an essential part of our lives; the average body is about 57 percent water. It is necessary for so much or our well-being from hydration to cleanliness. In literature, water is regeneration and renewal: the first sentence in award-winning author Margaret Laurence’s “The Diviners,” is: “The river runs 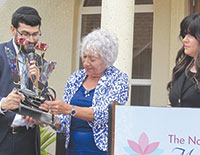 Rabbi Fishel Zaklos and Rebbitzin Ettie Zaklos present Sally Aaron with an award in appreciation of her donation to buildthe mikvah.

both ways.” This book not only tracks the life of a woman through the passage of time from childhood to maturity, but it also shows how our lives influence others and they influence us. What other mysteries and miracles can water hold?

A mikvah must be built into the ground and contain a minimum of 200 gallons of rainwater gathered according to an intricate set of laws. There are, however, two pools; the observer will see only the adjacent immersion pool that is drained and refilled regularly with tap water.

One must be scrupulously clean before entering the mikvah because it is not just about hygiene and cleansing. Women may not wear any makeup or jewelry and make sure that upon immersion the water touches every part 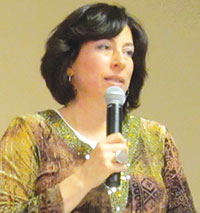 Guest speaker Shimona Tzukernik ‘s theme of “The Kabbalah of Intimacy: And the Waters That Keep the Fire Burning” spurred many questions and positivecomments during the evening.

of their bodies and every strand of their hair. With such an emphasis on cleanliness before entering the mikvah pool, it must be stressed that its ritual is based on the spiritual. Simply put, immersion in a mikvah signals a change in status, or more correctly, an elevation in status. Its unparalleled function lies in its power of transformation; its ability to effect metamorphosis. Women who use the mikvah say that they really feel a peacefulness come over them, as if they have made “a special connection” with their spirituality that they cannot achieve in any other way.

The primary use of the mikvah today is by married women of child-bearing status, following their natural cycles. As Rebbitzin Ettie Zaklos explained at the dedication ceremony, in the three vital steps of Judaism for women, keeping kosher brings God into the kitchen; lighting candles on the Sabbath brings God into the family and the home; the mikvah brings God to share the 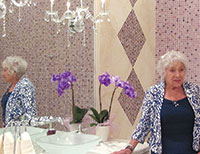 Sally Aaron, Marco Island, recognizing the need donated the necessary funds to begin the building of the Naples Chabad mikvah. She is shown in one of the elegant changing rooms.

intimacy of marriage. Those who willingly participate claim it creates a unique “honeymoon atmosphere” and an intensification and renewal of mystery to the marriage that, in fact, increases intimacy and the bond between the partners.

The mikvah offers couples the possibility of repeated “honeymoons” during the course of their marriage, when boredom and disinterest could beleaguer the relationship and chip away at its foundation.This is really the whole point of the mikvah as the Talmud states in this regard, “So that she will be as beloved to her husband as on the day of her marriage.”

As Rabbi Zaklos stated, like the good deeds and acts of kindness created by the families of Chabad who acted to complete this facility for the community, it is hoped that in the way that circles in water expand from the center, goodness and generosity will spread throughout the community and “be contagious.”

Anyone interested in more information on the practice of, or wishing to use the mikvah should contact Rebbitzin Ettie Zaklos, 239-262-4474.