Naomi’s Up to Her Ears in Kittens!

For the Love of Cats
Naomi & Karina Paape

I’m up to my tortie ears in kittens! I’m talking lots and lots of kittens! Just the other day I was making my morning rounds – taking inventory if you will, and thought surely my eyes were deceiving me; so much so that I had to dig out my calculator. The numbers weren’t lying. Sometime in the early hours of a placid March morning, nine kittens appeared as if out of thin air. We – For the Love of Cats, Marco Island’s no-kill cat shelter – had recently taken in two homeless and very pregnant mamma cats who’d been kicked to the curb by irresponsible humans who’d failed to have their furry friends spayed.

In the course of my feline head count, I discovered that both mammas had proudly given birth to their kittens while I slumbered on a ledge 12-feet above the sleeping bodies of shelter co-founders Jim and Jan R

ich. Naturally, I ran back into the house and awakened them (I use their torsos as a trampoline) so they could share in the joy. What fascinated the three of us most

was that the two mom cats – officially known as “queens” (after having their first litter) – were housed in adjacent condos. I really should have gotten in on the shelter volunteers’ birth-date-and-time pool. Yet another opportunity missed.

be surprised – is a chocolate tortie named “Blossom” from Arvil’s litter (tortoiseshell is not a breed; it refers to a coat color comprised of any combination of brown, amber, black, cinnamon, and red). Her siblings are named Basket, Asher, and Jellybean. And no, I can’t honestly tell you how my staff of 80 volunteers (remember, dogs have owners; cats have staff) come up with these out-of-left-field names.

Since we last spoke, the shelter has had two big scares. The first came when 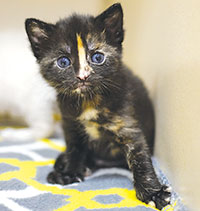 one of our more grown up kittens – “River” – went into acute renal (kidney) failure, much to the horror of her fur-ever home’s parents. The youngster had somehow ingested a pesticide that had been applied to the yard the day before, possibly from swallowing a poisoned bug. When her owners found her not moving and hunched in pain, they rushed her to their vet where she spent the next five days on IV fluids to flush the toxins from her kidneys.

In the meantime, her littermate – “Joan” – spent the days and nights of River’s lengthy hospitalization searching the house and meowing for her friend whom she thought was simply playing hide and seek.

River’s ordeal compelled me to research what substances/materials are deadly to cats. The biggest culprit, according to The Cummings School of Veterinary Medicine at Tufts University, is topical anti-flea treatment. These products contain permethrin, an insecticide that can be fatal to cats if absorbed in high concentration. Most cases of feline permethrin poisoning result when an owner accidentally applies an anti-flea product meant for dogs to a cat. In some cases, the over toxicity is the result of 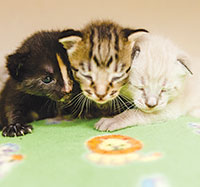 a cat licking the coat of a dog to whom the product has been recently applied.

River is now thriving, so much so that she made a video of herself playing with water coming out of the faucet of her staff’s bath tub. I was so entranced by her performance that I started practicing the faucet dance in Jim’s bathroom sink. In addition to splashing water everywhere, I have mastered the art of drinking from the unpredictable stream of water. Sadly, however, I think I’ve hurt Jan’s feelings. She laments, “Only Jim’s sink will do!” But it’s really not about favoritism, it’s about tortie-tude (we are strong-willed and very possessive of our person)! While we’re on the topic of the complex nature of tortie personalities, I am happy to report that a newly discovered Dr. Seuss book will be published by Random House, titled “What Pet Should I Get?” A no brainer right?

Our second big scare came when a de-clawed, 12-year-old cat named “Rascal” dashed out the front door of his fur-ever home and disappeared into the woods. An immediate search was launched and Rascal was found torn to pieces but alive. A bobcat had gotten hold of him an 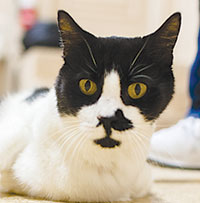 [/caption] wp-image-46746 alignleft” src=”http://www.coastalbreezenews.com/wp-content/uploads/2015/03/B15-pages-CBN-3-20-15-6.jpg” alt=”B15-pages-CBN-3-20-15-6″ width=”200″ height=”203″ />d, but for the intervention of the family’s dog, would have surely killed him. Poor Rascal was covered with bite wounds and suffered a complex leg break and nerve damage. He has been recovering at the shelter for the last six weeks and should be able to go home sometime next month.

In the meantime he is undergoing physical therapy under my expert supervision. I send him on forced marches around the shelter several times each day. And if I must say so myself, and you know I must, Rascal is progressing by leaps and bounds, which reminds me, did you know specialty veterinary hospitals are now using underwater treadmills for cats? Since 90-percent of geriatric felines suffer from some form/level of arthritis, said treadmills can improve their quality of life. These treadmills are also used for cats who’ve lost a limb and thereby must learn to walk on three legs.

Rascal is a repeat escape artist who has crossed the threshold of For the Love of Cats several times. As shelter supervisor, I’ve tried to rehabilitate him from his door-dashing ways. The only remedy for wily cats 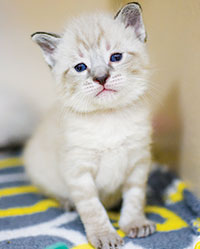 like Rascal, however, is to put them in a closed room when leaving the house. Or there is the very humiliating remedy of being put into a mesh-front, enclosed pet “stroller” and taken on tours of the neighborhood to satisfy these cats’ need to flee. I know of one very fluffy and very determined white Persian named “Cleopatra” who actually submits to said excursions. She insists that her daddy take her out each morning in her pink stroller to retrieve The Wall Street Journal. She justifiably expects a palmful of treats to soothe her blushing soul.

Now that we’ve ended up on the topic of food, my favorite subject, I have some fun facts to share with you. Forty-five million U.S. households are occupied by cats, 83-percent of whom consider their cat part of the family. Americans spend roughly $56 billion a year on their cats and dogs. Of that, an impressive $22 billion is spent on food alone. However, I don’t think I’m getting my fair share!

Naomi is a 6-1/2-year-old Tortie and a permanent resident at FLC. She is the shelter supervisor and takes her salary in food. She would love for you to learn more about For the Love of Cats at its website, www.fortheloveofcatsfl.com