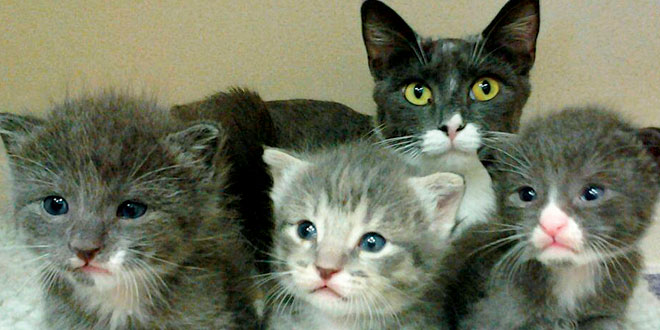 I am so proud of my stealthy self! I managed to execute a discrete raid on the shelter’s pantry and pigged out on a bunch of food I’m allergic to before our co-founder, Jan Rich, caught me in the act. “She ate herself silly,” is how Jan describes my “crime.”  But then, in the very next breath, she brags about me: “If she wasn’t so smart….” And yes, you guessed it, I am now paying the price: a bunch of the hair on my tail and lower back has fled the scene and been replaced with itchy sores that I’ve turned into fiery red scabs. No dates for this gal any time soon! And here we are, coming up on prom season.

In my defense, I can tell you that it was Jan’s fault that I got into the pantry in the first place. One day, as I was making my rounds and tending to all the little ones, I saw an opportunity and took it; I slithered past Jan when she turned her back for just a nanosecond, leaving the door conveniently ajar. Even better, when Jan shut the door she shut me in with all that food! It was pure bliss, like winning a shopping spree in a kitty candy store. My punishment – besides the demise of my gorgeous tortie coat – was to endure a long and boring lecture on feline skin problems. So now, as part of my ten hours of mandatory community service, I am compelled to give you a quick lesson in the most common skin problems. These vary in their causes but not in their effects: a litany of very bad and painful hair days. I know you’ll thank me for keeping this topic short; I mean, really, did you have any idea that there are at least 100 different things that threaten the health of our skin and coats, including skin cancer?

In terms of food allergies, dry food is a potential trigger worth considering thanks to the popular use of artificial ingredients and fillers such 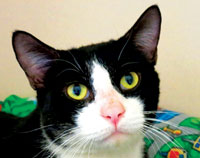 Charlie, a victim of abuse; this sweet boy now has a forever home where he is enveloped by love.

as corn and wheat gluten. In the last decade, food manufacturers have been trying to formulate a better mouse trap as it were. There are now dozens of brands and formulations that address every conceivable – and even inconceivable – health problem. “We are seeing a lot of cats that are sensitive to the common everyday foods,” Jan says. Food allergies are frustrating to pinpoint and require the expertise of a veterinarian to resolve.

An allergy to fleas is more common than you would think. Thanks to the advent of easy to administer, long lasting topical flea treatments there is no excuse for any of us to have fleas or to ever suffer from flea dermatitis. Just because we never go outside does not guarantee a flea free existence. Hanging out on the lanai and living with that flea bag dog your person is always walking makes us just as vulnerable to fleas as going outside ourselves to chase prey across hill and dale.

On a less clinical note, I have a few rescues, adoptions, and updates to share with you. But first, let’s talk about money: my staff took in $800 at the shelter’s yard sale on March 8th, and raked in nearly $700 at the Marco Island Seafood Festival. Considering we went through $10,000 worth of food and 16,000 pounds of cat litter last year, every nickel and dime helps. Thank you!

We experienced some incredible rescues last month. One kitty survived a two hour, 80 mph ride in the engine box of a car traveling from Miami to Marco. After the driver pulled into his driveway, miracle kitty jumped out and started wandering around in a daze. A kind-hearted neighbor and her daughter scooped up the beautiful, four month old tortie and spent five days nursing her back to health. Then they called me and I assigned one of my staff to go fetch the lucky kitten and bring her back so I could evaluate her. And do you know she had the nerve to hiss at me when I introduced myself! The absolute nerve of today’s kids. Since she was nearly 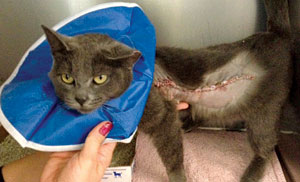 Our “Survivor Girl,” rescued in Fiddler’s Creek after a likely coyote attack.

as drop dead gorgeous as me, she had a forever home within 24 hours.

Another miraculous rescue was that of a sweet, five pound female who was found in Fiddler’s Creek. Her rescuer took the torn and bleeding kitty to the vet where surgery was required to staple her left side back together.  She had no internal injuries, but had clearly put up one heck of a fight. Her upper canines were broken off and one of her ears was shredded. “She had been in a terrible fight for her life,” says Jan. “I can’t imagine how she survived it”. The man who found her has adopted her.

Our gunshot victim Elsa has also found a wonderful forever home. You may recall she was living in a colony of ferals when one of our volunteers noticed that she was limping; her femur had been shattered by a bullet. She was whisked off to Tampa where a surgeon used a titanium plate to put her poor little leg back together. We practically threw a party for this lucky girl when she found her forever home. “She will have the staff she dreamed of,” Jan says.

Then there is our fan belt girl Josephina who sought shelter in the engine box of a jeep a few months back. It took 30 stitches to close up the gash in her right shoulder and five months of rehab. She goes in for surgery at the end of the month and has found a forever home with one of my staff members. And lets not forget abused boys Charlie and Phoenix who have also found forever homes and people they can now trust.

So, all things considered, my staff and I have enjoyed a magical month. We are now on the cusp of kitten season so this place will be hopping and bopping with kittens any day now; my work is never done.

Naomi is a 4 year old Tortie and a permanent resident at FLC. She is the shelter supervisor and takes her salary in food. She would love for you to learn more about For the Love of Cats at its website, www.floridacatrescue.com