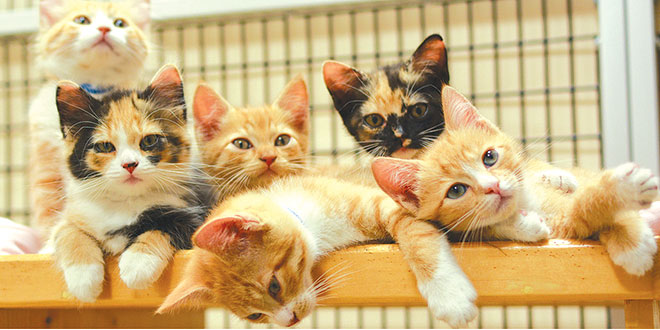 Shyla’s brood of kittens looking as cute as can be. PHOTOS BY NADINE OUILLETTE

I am up to my whiskers in kittens! I’m not too good with numbers, but it looks to me like there are hundreds of them. They’re swinging from the rafters, climbing the walls, running, jumping, tackling, stalking, tumbling, sliding, pouncing and either standing in or knocking over their food and water dishes. And yet, For the Love of Cats co-founder Jan Rich assures me that there are only about 20 of these rambunctious creatures in residence.

“Only,” she says! Can you imagine how much work this makes for yours truly? Not to mention the hours my staff (remember, cats have staffs; dogs have owners) of 80 spends lavishing love on these lucky kittens.

One champion of a mom is “Shyla,” who had six gorgeous kittens (see photos). While her babies were “pre-adopted” weeks before they could leave the shelter, their one-year-old calico mom still hasn’t found a fur-ever home because she is a little shy. But who wouldn’t be after being thrown out of the house for “being in a family way.” Now I ask you, whose fault was it that she wasn’t spayed when she was three or four months old?

Given my 24/7, paws-on experience with these little guys and gals, I have made some very interesting observations. Newborn kittens weigh approximately 3 oz. when they pop out of mom, and they are blind and deaf. Did I mention that they look like baby mice? This brings to mind a funny story about a tortie I once knew. Said tortie — who was still a kitten herself — was so proud of her newborn litter, her first, that in the pre-dawn hours of one Mother’s Day she proudly laid her kittens out in a tidy row and waited for her rescuer to wake up and see them. (Yes, people do rescue pregnant cats.) When the half-awake, coffee-deprived human went to check on her momma-in-waiting, she didn’t recognize the tiny, 3 oz. creatures as being kittens. She screamed and took off running because she thought there were four blind mice sleeping on her new cat’s tummy.

Believe it or not, kittens grow very quickly. By the time they are five days old, their weight has doubled. From that point on, they gain approximately 6-8 oz. a week. Also — and here’s where my jealousy rears its fuzzy head — they spend 90 percent of their time sleeping (22 hours) and 10 percent of their time eating (2 hours). What a life! I wish someone would spend two hours a day feeding me. Just show me where to sign up!

In addition to getting the red carpet treatment, these kittens insist on upstaging me. (I’m the one with the fan club.) If you don’t believe me, just check out my kitten cam, viewable on my website www.fortheloveofcatsfl.com from 9 AM-6 PM daily. It’s really funny when they press their noses against the lens!

As soon as kittens hit the three-week mark, my staff starts the socialization process — the goal being to make them comfortable and confident around humans. Weeks three through seven are the

Shyla and her kittens feeding shortly after they were born.

formative weeks of their lives (which on average last 12-15 years with the occasional show-off who makes it to 21-years-old). They all may not turn into lap cats, but there shouldn’t be any cowering behind the Christmas decorations in the top of your closet or reluctance to hang out with you while you watch some tear-jerker of a movie. But they do expect you to share the kleenex.

So, you ask, how does one pick a kitten when every one of them looks so darn cute? It’s usually love at first sight. Consider the following scenario. An unsuspecting human walks into Petsmart during one of our adoption weekends. After grabbing supplies for the adult cat waiting for them at home, they accidentally take their cart down the aisle where kittens are waiting to pick out their forever humans, and then, the unsuspecting shopper sees her. The pull at the human’s heart strings is so overpowering that the now love-struck person tells Jim or Jan that she has to have such-and-such kitten. But bad news; this particular kitten was adopted just seven minutes earlier. Crushing heartbreak follows.

But Jim and Jan tell the disheartened soul that they have many more kittens at the shelter. Sensing hope on the horizon, said human makes an appointment to visit the shelter with her husband. The couple arrives only to find the place bursting at the seams with kittens. Now they’re in trouble; how are they going to choose?

The husband makes a beeline for one of our two romper rooms where one litter of kittens is showing off. The husband is now sitting in a chair with kittens climbing up his legs. Eventually, one of the kittens takes up residence in the husband’s lap. After 15-20 minutes, the husband looks at his wife and says, “I think this is the one.” The wife doesn’t manifest the slightest whisker of enthusiasm for the cute boy kitten her husband has fallen in love with, but the husband, being the wise man that he is, looks up at his wife and tentatively says, “No?”

His wife answers, “I like the little girl. Look at the white stripe on her nose and her white feet.” The husband gets it (as well he should) and says, “So I guess that’s the one you want?” “Yes,” responds the wife. By the time “Lucy” goes home (at about 12 weeks of age) with this lucky couple (after I conduct a thorough background check, of course), she will have been spayed, microchipped, de-wormed and up-to-date on her kitten vaccinations.

As you can imagine, my job is stressful, but I enjoy being shelter supervisor, kitten trainer and matchmaker. And, after the ardors of the day, Jan lets me in the house for some much needed R-and-R. I love to sit on the kitchen counter and stare at the refrigerator. It soothes me.