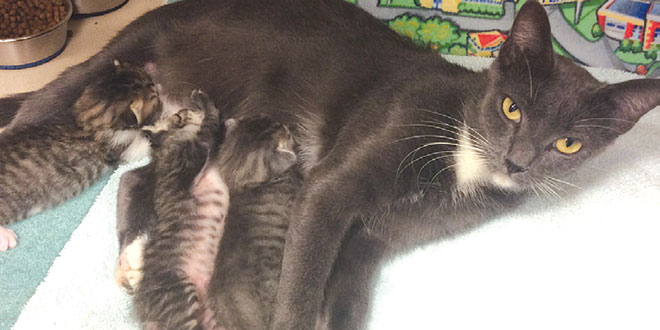 Marissa and her kittens. SUBMITTED PHOTOS

My little tortie heart is crushed and broken. There is not a photo to be found of me in our 2015 Glamour Puss Calendar — for the second year in a row, I might add. Did someone forget to tell me I’ve been placed in the Witness Protection Program? There is, of course, the remotest of possibilities (very remote I might add) that I’m wrong, so here’s the deal. Anyone who’s been to Disney World knows there’s a great game whereby visitors are challenged to find “hidden Mickeys.” I’d like every one of my feline fans and pals (your staff can also help) to go through our hot-off-the-press calendar with a fine-toothed comb (a flea comb works best) to see if perhaps there’s a hidden Naomi or two I may have missed. Should you find said photo or photos, I will give you a personal, one-hour tour of my digs here at For the Love of Cats. I’ll even throw in a gourmet lunch (Fancy Feast).

I do, however, have a promising theory as to why my staff (we all know dogs have owners and cats have staff) failed to include any of my drop-dead gorgeous photos (of which there are hundreds if not thousands) in our 2015 calendar. Just maybe I took too much vacation time this summer. For those of you who follow my every move — especially as it applies to counter surfing for scraps of food — you know that I went to Key West in July and Boston in August, using up three weeks of 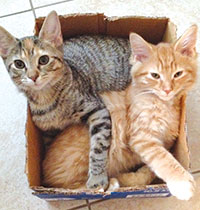 my eight-months of annual vacation time (you can’t believe how exhausting tending to all of these kittens can be). Then, I snuck in a six-day trip to Orlando, and yes, you guessed it: I went to Disney World.

While slithering through Animal Kingdom, I saw a pair of 16-year-old Bengal tiger sisters…such enormous paws they had! I swear each paw was the size of a litter of eight, six-week old kittens. Other than that, they’re just like you and me, well almost. These tigers can grow to 11-feet in length and weigh as much as 900 pounds. They spend their days napping, stretching, rolling on their backs to massage those sore muscles, hang ten with their feet aimed skyward while dreaming of their next hunt, and tickle their impressively long whiskers with their mammoth paws. How would you like to trim those nails?! I can’t tell you the gorgeous sisters’ names because that info is given on a need to know only basis. This ensures that the girls respond only when their trainers call them instead of spending the day having their names screeched thousands of times by under-medicated, over-caffeinated children.

Back to my shattered heart. I’m giving shelter co-founders Jim and Jan Rich the benefit of the doubt. Maybe they just couldn’t find me when the calendar deadline approached. It’s not that I’m so vain (although I am); I’ve just always thought the shelter revolved around yours truly. One medical professional went so far as to conclude that I may even be “high-maintenance.” The guy was obviously clueless about torties and their highly refined tortiettude.

I know you all know that 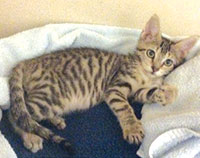 I keep my 70-member staff on their toes and moving along at a pretty snappy pace, but I don’t think we’ve ever had this many abandoned moms and litters cross our threshold since our inception in 2002. Of course, and please excuse me for bragging, in the 12 ensuing years, we have rescued and found fur-ever homes for 3000 cats and kittens! I’m quite the little sales girl aren’t I (okay, Jim and Jan do give me a lot of help, but I’m the one who trained them).

One of the most difficult cases my staff dealt with in my absence was a poor little boy named “Prairie,” who arrived needing eyelid surgery. His eyes had been infected by the Herpes virus which left him with lots of uncomfortable scar tissue which, in turn, pulled his eyelashes into his eyes. With his surgery now behind him, Prairie is having the time of his life playing with anyone who will co-operate, running and jumping everywhere he can, and wreaking general mayhem in the shelter. Oh well, boys will be boys.

My hero of late is “Marissa,” who recently gave birth to three tabby kittens right here at the shelter. I of course was mid-wife, and we quickly became pals because she loves food as much as I do. Even Jan was surprised: “She’s eating everything in sight.” A girl after my own heart.

It’s a little known, but important, fact that October 16 is “National Feral Cat Day.” When Jan and Jim got to Marco Island all those years ago, the place was overrun by feral cats (wild, anti-social, hissy-spitty creatures). Thanks to 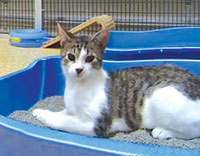 the Rich’s determined implementation of the Trap-Neuter-Return program (TNR) championed by Alley Cats Allies (the world’s leading advocate for us felines), however, the island is no longer plagued by a severe cat overpopulation problem. My staff currently cares for 300 feral cats living in some 20 managed colonies where they receive food and fresh water 365 days a year from a battalion of volunteers.

Speaking of ferals, we have a new colony of two behind Marco Walk Center on Landmark Street. If you are lucky enough to see them out and about, their names are “Fluffy” and “Petita.” In the majority of communities, ferals are simply caught and killed. In fact, years ago a Marco Island business put a $50 bounty on feral cats killed by its employees. Fortunately, Jim was able to convince management that the cats played a valuable roll in rodent control. After a few years of TNR on the premises, the cat population is well stabilized, and the rodent population is well under control. I haven’t gotten a call in years about new cats or litters of kittens found on site.

Just down the street from Fluffy and Petita’s colony someone found a six-month-old house cat who’d been abandoned by her humans for reasons unknown. Poor girl came in with a fractured vertebrate and a broken tail, the bones of which were exposed with maggots camped out in the wounds. We have since amputated her tail and named her “Maggie.” She is looking for a fur-ever home that will nurture her sweet and laid-back personality. 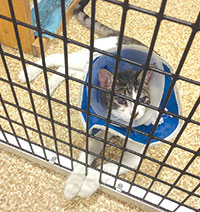 once wavered in her distrust of humans, but her maternal instincts were such that she nursed four orphan kittens who’d lost their own mother. With her milk finally dried up, Cecelia was spayed and is enjoying her new life as a barn cat in Golden Gate. We also took in a lice-ridden, seven-week-old kitten named “Twinkles” who will need a fur-ever home once his Revolution and lime juice treatments have made him lice-free.

And last, but not least, I will be sharing a “Naomi’s stunt of the month” with you every installment, starting this very minute. At 4 AM, I like to crawl up on the ledge above Jim and Jan’s bed and make a flying leap like those crazy base jumpers do on daredevil TV shows. Although I don’t use a wing suit or a parachute to slow my six-foot free fall, I nonetheless land with balletic grace on Jan’s peacefully sleeping body. Jan insists that she has the bruises to show for it. Once she gets the hint that I want to be fed at 4 AM, I will cease and desist with the gymnastics! I got the idea from my pal, Tanner, who, at 5 AM, starts biting his person’s finger tips until she wakes up, abandons all hope of sleeping in, and dutifully makes a beeline to the kitchen to feed him and let him out on the lanai.

’Til next time…Love, nips, and purrs!