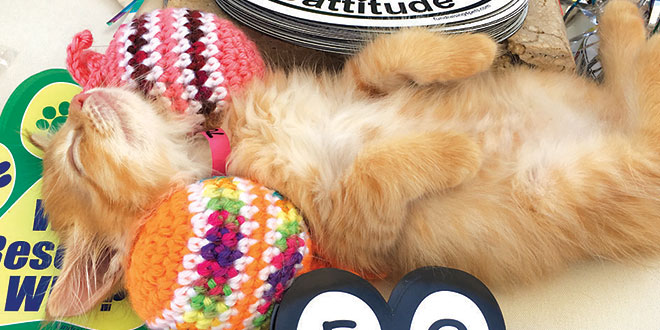 Tosca has fun at the Farmers Market.

FOR THE LOVE OF CATS
Naomi &
Karina Paape
chestergun@comcast.net

Dear Fellow Felines: I was a bad girl the other evening when I decided to help with getting dinner on the table. And guess what? I got burned, but it served me right! Therefore, I’m humbly sharing my wrong-headed actions with you so you don’t make the same mistake I did. It really wasn’t worth it.

As you all know, I am a cat, albeit a very special one whose main task in life is to supervise operations over here at For the Love of Cats, Marco Island’s no-kill cat shelter. Those of you who’ve been diligently reading my monthly missives for the last three years know that I always have my paws into something. Well this time it was a pot of stew that I decided had simmered a bit longer than the recipe called for. I looked over both shoulders, but didn’t see a soul in sight; just the household’s other three cats who were standing by.

Since it wasn’t in my nature to let dinner get ruined, I gracefully leaped up onto the stove with every intention of turning off the offending burner. The only problem was that I landed on the very burner from which the pot had just been removed. Unobserved by me, shelter founder Jan Rich had moved the pot to a cold burner while I was looking over my shoulders. I let out a show-stopping 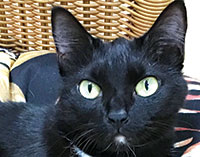 Rosie, a four-year-old rescue cat, is recovering from an infection. SUBMITTED PHOTOS

cry and within seconds my staff (remember, dogs have owners, cats have staff) came to my aid and plunged my paw into a canister of flour. I’ve been limping ever since and have milked quite a bit of pity out of the whole sorry affair.

But no matter what escapades I get myself into, there’s always a cat here in the shelter who has been through far worse. Take sweet little Rosie. This beautiful, 4-year-old black cat was rescued over by Tallwood with a severely infected armpit. Poor thing had been dumped there by her former guardians. One of her front legs had gotten entangled in her collar so that it was chafing her left armpit with every step she took. Had she been in the wild much longer she would have lost her leg to amputation.

In addition to medication, my staff is treating Rosie’s infection with hydrotherapy, which involves laying her on her side in the sink and running semi-hot water over the wound for five minutes a day. She is such a good sport, but still so traumatized by being abandoned that I can’t get her to come out of her kitty condo and play with me. So let this be a lesson to each of you: never let your staff adorn your neck with anything other than a break-away collar. Said collars are designed to release under pressure so kitties like Rosie don’t

get choked or entangled.

Also of note are the two kitties I took in who had dangerous eye infections requiring immediate surgery. As the result of the herpes virus, a cat named Sergio was found suffering greatly after his eyelids attached themselves to his eyeballs. The second cat, Alanna, ended up with a lacerated eyelid after being beaten up by another cat in her household. The attacking cat got one of its front claws hooked through her third eyelid. Once Sergio and Alanna were free of their cone collars, they each got to go to new fur-ever homes. As I’ve said so many times before, I love happy endings!

Speaking of which, the number one question my staff gets asked at the Farmer’s Market is what to do with a cat that has lapses in litter box etiquette. There are all kinds of reasons, the most common being territorial disputes and bullying by another cat in the household. If you don’t think either of these issues is the culprit, you would be well advised to take kitty to the vet to check for a urinary tract infection. Cats with UTIs often associate the pain of urinating with the litter box so they go elsewhere.

If you like playing detective, or using scientific approaches, I have three ideas for you from the Cummings School of Veterinary Medicine at Tufts University: 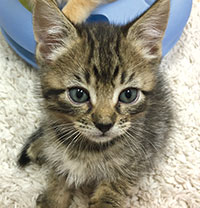 locations that have been soiled. Have the feed sent directly to your browser or smartphone, or review the images later.

*Ask your veterinarian about the use of fluorescein dye. It is administered to one cat at a time, and it causes urine to glow green under fluorescent light.

*Use “Spray Alert,” a product that sounds an alarm when a sensor material is sprayed, alerting you so that you can determine immediately who’s responsible.

Now lets talk about the weather! I know the majority of us felines are indoor-only cats. But you have to admit that we’ve had some cold and nasty weather of late so I had to do some winterizing. It took a lot of web surfing, but I managed to find a heated cat shelter designed for outdoor cats. Boy, what a set up! The exterior of the shelter is waterproof, as is the floor, so it kept me dry even during that one monster monsoon that dumped five inches of rain. An under floor heater kept me nice and toasty warm; all I had to do was plug it in, kind of like a feline RV. I parked mine on the lanai so I could monitor gecko races.

Naomi is a 6-1/2-year-old Tortie and a permanent resident at FLC. She is the shelter supervisor and takes her salary in food. She would love for you to learn more about For the Love of Cats at its website, www.fortheloveofcatsfl.com