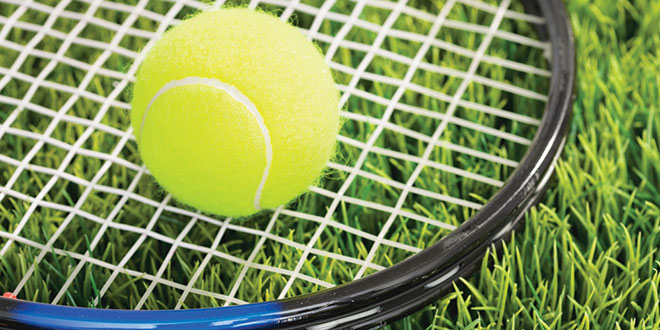 The big stage never looked better; no wind, no humidity and 175 enthusiastic fans cheering on 28 talented Southwest Florida professionals during the finals at Hideaway Beach.

Tye Myers, who grew up in Naples and now is a club pro at both Eagle Creek and Hideaway Beach, needed enough of his A-game to edge out the stiff competition as he won the number one title by one game! His biggest competition was Benji Kendall, former tennis star at Penn State University and Lynn University. Kendall boasted a flashy and bombastic forehand drive and ‘dipper’ as he stayed in 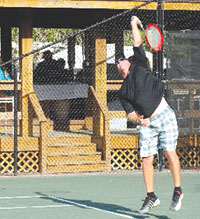 the chase with Myers the entire afternoon. Quail Creek’s Jose Pastrello was also on Myers’ heels as he dazzled the huge crowd with his tenacious doubles game.

Marco Islanders were treated to some of the best tennis of the year with so many different pro styles and amazing shot-making for over two full hours. Here are the other winners during the round robin format: 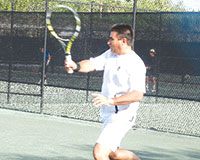 During the 11-week Naples Pro League season, the players competed in a completely different format. For example, the number one player teamed up with the number two player and then played two out of three sets each week throughout the fall and winter months. So, when the teams finished the regular season and moved into the playoffs the organizers (Warren Eber and Anthony Hatori) wanted to add a new twist and arrived at their new system which all of the players embraced.

Due to the huge crowd 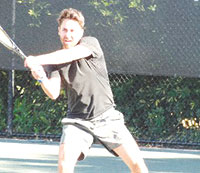 Seth Fogelman nails a two-handed backhand crosscourt for a winner.

at Hideaway Beach, the host club qualifies for another berth next year during the 2015 campaign. Stay tuned for the latest details as Hideaway Beach tennis will continue to run several top-flight tournaments next season.

Tennis tip of the week: Avoid the temptation to one-up your opponent during a heated rally. Most inexperienced tennis players over-hit when they feel pressure. If you are relatively new to the game of tennis it is prudent to choose steadiness over power when faced with adversity. In other words, when the service returner rips his stroke, consider hitting it back much slower. In most

cases, the opponent will be befuddled because they are expecting the foe to attempt to ‘rip’ it back. The smart, cagey player always finds a way to keep the ball in play and tempt the opponent to go for an unrealistic shot.

In summary, understand your limitations; when the pressure is on, just ride the wave and return the ball.

Doug Browne is the Hideaway Beach Tennis Director and the new Collier County USPTA Pro of the Year. Additionally, Doug has been the International Hall of Fame Director of Tennis this past summer. Doug has been writing a tennis column for the past fifteen years and welcomes your feedback.