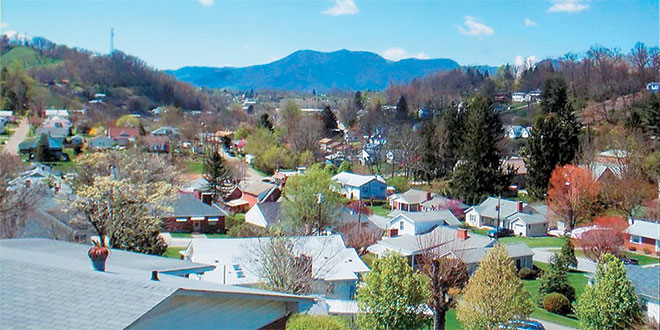 The Canton Chamber of Commerce chose this as one of the views used to attract businesses and new residents to Canton. Bill Gwinn’s first Canton house is the white bungalowprominently featured at lower left.

My newest best friend lives in North Carolina. Her name is Cassandra. She is a strikingly beautiful blue-eyed blond. She lives in Canton, N.C. where she grew up and spent most of her life. Until September of last year, I had never heard of her. On May 28, 2016, Cassandra, 46, (affectionately known to me as Cassie) married my son Bill, 52. To accommodate all the guests, the wedding took place in the Canton National Guard Armory. It was one of the happiest days of my life.

Canton is located about 13 miles west of Asheville in the scenic Appalachian Mountains and on the doorstep of the Great Smoky Mountains. A city of about 4,500 people, Canton prides itself on being the second largest city in Haywood County, N.C. It is also home to a large paper mill and seven schools, which provide education to surrounding areas. It has little changed since the paper mill came to town in the early 20th century. Bill Gwinn came to Canton in 2001. He didn’t know it then, but knows now that he will spend the rest of his life there.

Bill’s journey to Canton began, when in 1986, he enlisted in the U.S. Marine Corps and reported to Parris Island, S.C. for basic training. After basic, he was assigned to a unit at an R.A.F. base in England. While there, Bill befriended Todd Ferguson, another Marine in his detachment. Ferguson happened to be from Canton, N.C. and was accompanied by his wife, a high school sweetheart, whom he had married the year before. At the Marine Corps Ball in November

Bill and Cassandra Gwinn with Nancy and Barry at their May 28th wedding in Canton, N.C. These guys really seem to like each other. Submitted Photos

1987, Bill and his date sat next to Todd and his wife. She happened to be Cassandra James Ferguson, who at the age of 16 had dropped out of school to marry Todd. Neither Bill nor Cassie was impressed with the other. “Bill was boisterous and kind of crazy,” said Cassie. “She was just a kid,” countered Bill, who considered himself an accomplished ladies’ man. Nothing here. But neither ever forgot that first meeting. Todd would regale Bill with stories of the fishing and beautiful mountain streams and rivers in western Carolina. Bill spent the last two years of his enlistment at the USMC Base at 29 Palms, California, located in the harsh Mojave Desert, 130 miles east of Los Angeles. Todd Ferguson was also assigned to his unit (still accompanied by his wife), and told Bill of a community college in Asheville, N.C. which might accept him as a student. Upon his honorable discharge in 1990, Bill headed to Asheville, N.C., where after a year at AB Tech Community College, he was admitted to the University of Western Carolina, graduating in 1995 with a degree in marketing. This ultimately led to a job as regional sales rep for a Fortune 500 company, Republic Services, which had an office in Asheville. In 2001, Bill and his first wife, from nearby Candler, bought a cute bungalow in Canton. Ironically, it was Bill’s wife who insisted on that house, in that town, a decision that was to change the course of both their lives. “After Bill left 29 Palms, it was like he dropped off the face of the Earth,” Cassie 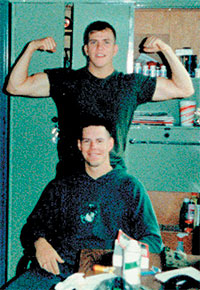 Bill Gwinn at USMC Barracks, St. Mawgan,England at about the time he met Cassandra Ferguson in 1987. Shown here with Jim Ball, a member of Bill’s unit.

told me, “I had plenty of my own problems and pretty much forgot about him.” The key words here are “pretty much.”

Cassie had moved back to Canton in 1994, settling on mountain property owned by her parents outside of town. When Todd Ferguson came home from the first Gulf War, he was a changed person, moody and uncommunicative. Things came to a head when Ferguson discharged a firearm in their Canton residence. Cassie and their infant son, Nicholas, who had been born five years after their marriage, were both present. “Todd had become a threat to our safety,” Cassie said, “We were terrified. After the gun incident we were constantly on edge.” It was an impossible situation for her. In 1997, the marriage ended in divorce.

Cassie subsequently married another high school sweetheart, Danny Cope. A daughter, Haley, was born of this marriage in 2001. About a year after her birth, Haley Cope was discovered to have contracted an active and insidious disease known as cytomegalovirus, or CMV. Over half of adults by age 40 have been infected with CMV. Most people infected with CMV show no signs or symptoms. However, CMV infection can cause serious health problems for babies who contract the virus before they are born. The doctors determined that Cassie had passed this virus to Haley during the third trimester of her pregnancy – one of the worst possible times. There is no known treatment for this virus. It is present for life. It was devastating to Cassie to realize that she had given this virus on to her daughter. Her guilt has only added to her 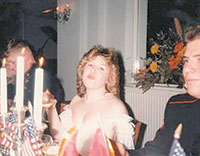 determination to always be there for Haley, who now suffers from intellectual disability, coordination problems and seizures.

Now, in 2001, Bill had moved to Canton, Cassie lived and worked in Canton, they shopped at the same places, and both had children (or step-children) close in age who attended the same school. Cassie worked at a local Main Street pharmacy, filling prescriptions. And yet for 14 years Bill and Cassie went about their lives without knowing the other was in town. By 2015, the marriages for each had turned sour, for much the same reasons. Both were contemplating divorce on account of infidelity by their spouses. Both their spouses had moved out. Bill and Cassie were struggling, despondent and alone. On top of this, Cassie had taken active role in caring for her dad who had been placed on kidney dialysis. Then, on June 5, 2015, Cassie’s mother asked her to go into town and get $3.46 worth of milk. Cassie has saved the receipt.

Ingles was the place to buy groceries in Canton. Bill too was food shopping and showed up at the same time. In a rush to get a shopping cart, he literally bumped into her. In fact, he almost ran her over. He was visibly annoyed that Cassie had gotten in his way. It had been 24 years since they had last seen each other. He obviously didn’t recognize her, but Cassie had remembered him. “Aren’t you Bill Gwinn?” she asked. That was the beginning. The two talked for another hour and a half. A couple of months later they had become inseparable. 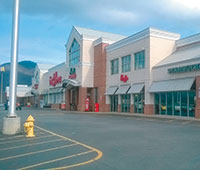 daughter, Bill’s sister, Nikki Kaheh, at a Pennsylvania family reunion for the family of my first wife. Cassie and Nikki quickly became fast friends. Cassie’s upbeat, can do attitude is hard to resist. Soon the two women were planning a summer vacation on Marco Island. A connection between the families of my two children had finally been forged. Last December, Bill brought Cassie down to Florida to meet Nancy and me. They brought Haley along. She is a lovely and sweet teenager. When they left, four days later, we had fallen in love with both of them. Bill and Cassie’s wedding followed on May 28th.

Cassie’s late entrance into our family was like a breath of fresh air and has served to rejuvenate and unify all of us. It was an unexpected life changing event, which does not often occur at this late stage of life. She has touched and uplifted all of us. Nancy and I had not traveled in years. Nancy’s Parkinson’s disease made it too awkward and exhausting for her. That was before Cassie. This time, Nancy got dolled up, I packed a suit I had been saving for my funeral, and we flew up to the wedding. We couldn’t stay away and had the time of our lives. We are already thinking of going up again for Thanksgiving. Yogi Berra was right. “It ain’t over ‘til it’s over.” Thank you, Cassie.

One response to “My Newest Best Friend A Carolina Love Story”