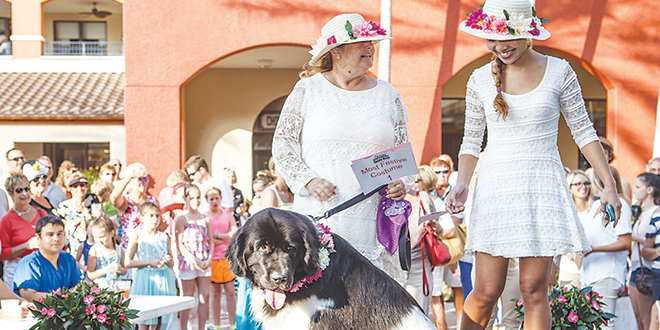 Dominic Corva leaves home before dawn every Saturday and embarks on a mission to aid the less fortunate among us. The Marco resident is part of the group of volunteers who deliver donated bread and other baked goods daily to the migrant farm workers at 6L Farms in East Naples and to Manatee Elementary School, where they are distributed to students from needy families. “It’s so heart wrenching that we live in such a great country where we have so much and these people have so little,” said Corva. “They’re so grateful and nice. They’re just the nicest people.” The daily bread runs were started in 2008 by Bedtime Bundles, the Marco Island charity that provided food, clothing and other necessities for the migrants at 6L, which is located off of U.S. 41. All the day-old bread and baked goods are donated by the island’s two Publix Super Markets and the Starbucks Coffee Company store in the Esplanade Shops. Bedtime Bundles folded last September, but the Greater Marco Family YMCA stepped in to continue operating the daily bread runs. “The Y was given the opportunity,” said Allyson Richards, president of its board of directors and the director of the daily bread run program. “Bedtime Bundles was looking for an organization that had a similar mission, to serve the underserved and the poor of Collier County.”

Aside from the bread runs, Marco’s Y also operates the YMCA Y Reads after-school literacy improvement program for children in kindergarten through third grade at Manatee elementary, as well as Parkside and Avalon elementary schools in East Naples. All three are Federal Title 1 schools – those where 90 percent of the students qualify for free or reduced breakfasts and lunches. The Y’s summer camp program further embraces low-income families through tuition discounts for children who attend Title 1 schools. The camps are offered at the organization’s Sandhill Street campus, as well as Manatee, Parkside and Lely elementary schools. Richards said grants enable the Y to provide healthy breakfasts, lunches and snacks to the children, and a partnership with the Marco Island nonprofit Meals of Hope enables weekend meals to be provided to low-income children. Steadily rising enrollment in the afterschool program and the summer camps has heightened the importance, for Marco’s Y, of grants and donations of money and volunteer time from the community. Proceeds from Mutts & Martinis will benefit Y Reads, the summer camps, migrant children and their families, and the underserved of Collier County. “We were absolutely thrilled by the turnout,” said Cheryl McDonnell, YMCA Development, about at Mutts & Martinis 2015. “The community had an absolutely wonderful time at the event. Thank you so much to all of our wonderful volunteers and supporters. You made it such a special evening to benefit the Marco YMCA and our programs.” Richards, Corva and Bedtime Bundles founder Karen Saeks all said the need for food of all types, clothing and other items is great amongst the migrants at 6L and other low-income residents in the Marco area. “I think we need to be collaborative,” in assisting the needy, Richards said of the island’s charitable organizations. “When I talk to people, a lot of them don’t realize that there are people living 12 miles away that are living in poverty.” Corva and his wife Lorraine were also active in Bedtime Bundles. They said that once the organization ceased operations, people began leaving donations of clothing, toys, furniture and other items in their driveway so they could be distributed to the workers at 6L Farms. Dominic Corva delivers those items when he makes the bread runs, said his wife. “These people are real and the need is real,” said Lorraine Corva. “Bedtime Bundles did a lot of work. The Y picked up some of that, but a gap still exists.” For more information on how you can help, please call Cheryl McDonnell at 239394-3144 ext. 204 or email dev@marcoislandymca.org .