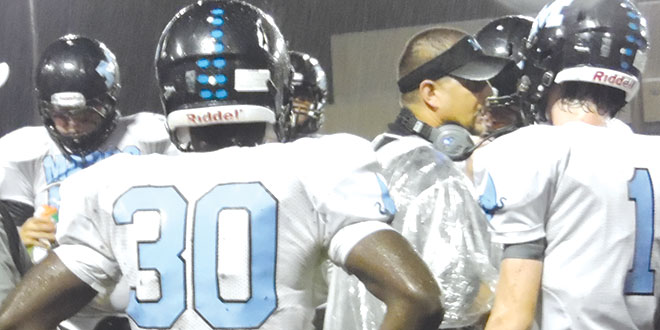 The Moore Haven Terriers hounded Marco Island Academy in winning 46-7 at Moore Haven on Sept. 26. The loss evened the MIA Manta Rays record at 2-2 and 0-1 in the district.

Moore Haven won its first game against four losses, all to larger size schools. The Terriers forfeited their game the week before the Marco game to make sure all players were ready for the district clash.

Moore Haven’s D’Angelo Ware proved his importance and why he is going to Iowa next fall, rushing for three touchdowns. He amassed 134 yards on just four carries. Cayden Couture was the shining star on the rainy, muddy field for the Manta Rays. He ran for 124 yards, including a 61-yard touchdown jaunt.

But the Manta Rays, looking for their first-ever district win, stumbled from the start. A blocked punt gave the Terriers its first score in the first two minutes. A fumble recovery by the Manta Rays was negated by a penalty, and a 35-yard run by Ware gave the Terriers a second score for a 13-0 lead in just the first four minutes. Brian Flynn’s interception halted another Terrier drive, leading to

MIA’s Cole Stretton shows the effects of a rainy, muddy football game along with Tyler Wallace. SUBMITTED BY NADINE STRETTON

In the second quarter the Manta Rays rallied on a 57-yard pass play from Andrew Fowler to Couture. However, a pass to keep the drive going saw the ball squish out of the receiver’s hands into those of the Terriers’ Markeis Hallback for a 70-yard score.

The Manta Rays had their best drive in the fourth quarter, registering four first downs. Fowler was headed for the end zone when the ball popped up in the air as he was hit. It went into a Moore Haven defender’s hands at the Terriers’ 13. Then it was off to the races again for Ware on an 87-yard TD run.

Overall, the Manta Rays committed four turnovers, a blocked punt, at least 10 dropped balls on passing plays and committed seven penalties in the first half alone.

The game showed that the Manta Rays, under first-year coach Greg Fowler, have talent but are in a difficult learning process. Mistakes have cost them in losses to experienced teams in Moore Haven and Community School.

(Editor’s Note: At presstime, Marco Academy was preparing to travel to Jupiter Christian High School on the East Coast for a non-district game on Thursday, Oct. 2.)