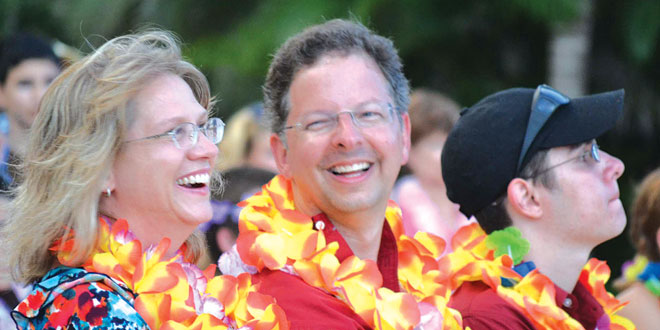 The Marco Island Marriott Beach Resort hosted the Moore Family of Simsbury, Ct. for a week in August. The Marriott learned about Kevin Moore’s wish to vacation on the beach from Make A Wish Foundation, which grants wishes to people who have suffered grave illness.

Kevin was discharged recently from the Middletown Children’s Hospital in Middletown, Ct. after a lengthy two-year hospitalization. As a young teenager he was diagnosed with a brain tumor and has undergone multiple surgeries, implantation of stents in his brain, and serious post operative complications. Kevin has received long term therapy to learn to stand and walk again with a walker, restore muscle tone and manage multiple physical limitations, including therapy following surgery to repair a severe drop foot.

Kevin’s dream vacation was to visit Hawaii but his doctor preferred that he remain on the east coast of mainland United States in the event of any medical concerns. In order to truly fulfill Kevin’s wish the Marriott staff arranged a luau dinner on the beach followed by a celebration of dances from the 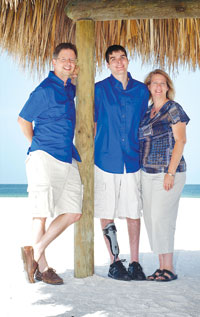 Art, Kevin and Beth in a family photo. SUBMITTED PHOTOS

islands of the South Pacific. The performers were professional dancers from the Aloha Islander Company. The first performance celebrated the Island of Tahiti, then a hula, a traditional Polynesian dance. The dancers told a story with the rhythm of their hips and hands and a large audience of beachgoers gathered to enjoy the wonderful music and dancing, swinging into their own versions of extravagant hula gyrations. The audience stepped back a bit during an exciting fire dance which required the dancer to leap into the air and perform some extraordinary moves while holding a long staff with fire at both ends.

A Maui war dance from New Zealand was performed by the full troupe. Kevin and his father, Art Moore, were invited to join the women performers in their concluding dance and surprise, surprise, out came the grass skirts! Along with several of the Marriott male staff also in grass skirts, who provided support for Kevin, he and his dad really learned to work their hips! As a matter of fact, Art remarked. “Kevin did some moves which should 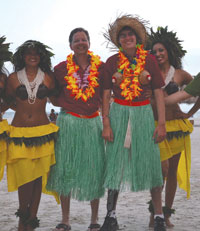 The Moore men with their talented teachers.

be added to his physical therapy program!”

The final presentation was an exciting Samoan war dance complete with fire dancing and the musical theme from the popular Hawaii 50 television series back again on television after 40+ years. The marvelous luau concluded just as our southern sky, bathed in a soft, iridescent glow from the setting sun, offered its own magnificent performance.

Kevin and his family enjoyed many more new experiences during their week at the Marriott, including a dinner cruise on the Marco Island Princess, golfing at The Marriott Rookery, shelling on Morgan Point at Cape Romano, swimming in the Gulf of Mexico and enjoying Marco Island’s beautiful beach. The family received many special gifts including an authentic Boston Red Sox shirt, obviously Kevin’s favorite team.

Kevin’s parents are hearing impaired and communicate with sign language. Kevin is fluent in sign and assists his parents to communicate with people whose principal means of communication is the spoken word. The Marriott arranged for a professional interpreter to assist the family throughout the week. Lori Timson, Executive Director of Deaf Service Center 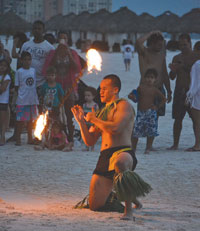 of Southwest Florida, Inc., personally provided communication services to the family in order to relieve Kevin of full responsibility for translation. Lori declined reimbursement. She commented that it was a pleasure to share Kevin’s dream vacation and assist the family with communication during a busy week of new experiences and new people every day.

Beth and Art shared the dynamics of how they managed the everyday lives of the family, which includes their older son, Brandon, and their commitment to have a family member at the hospital with Kevin every day. “When our family had to go through a terrible difficulty, we all held together and supported each other. The great doctors and staff at Middletown Children’s Hospital offered us support as well as taking very good care of Kevin through his long hospitalization. We have learned so much through his illness. Kevin has made great strides, a lot more work to do but we are very hopeful for his future.”

Beth and Art both have busy jobs. Beth works for the American School For The Deaf in Hartford, Ct.

Art is employed by Sprint Communication Company in the area of wireless, mobile devices for hard of hearing consumers. Beth described how the family keeps track of their daily responsibilities. “We have a big dry erase board on a wall in the kitchen. Everyone’s schedule is written on the board, including Kevin’s therapy and doctor’s appointments. When he was in the hospital for two years we kept track of his daily routine so someone in the family could be with him through surgeries and recovery, tests, treatments, everything as well as daily visits to him. Because we are back and forth so much we have to have clear routines and ways to fill in for each other.”

Kevin was able to join his class on Graduation Night, a very important goal for him. His classmates gave him a rousing, joyful welcome, a proud moment for the entire family. Kevin maintained his course of studies whenever his health permitted during his years in the hospital and will complete his high school work in 2014.

“He is 20 and lives at home. He has his own space and is independent. We are very close and he has done so much for me. I definitely would not be the person I am without him.”

In answer to a question about his future goals, Kevin shared that he is thinking about the medical field. “I want to help people recover from illness the way the doctors and staff helped me. I am looking forward to my future and hope I will meet someone special to share my life.”

His dad added. “The last years have been very challenging but our sons’ grandparents helped us so much to maintain our schedule and a good neighbor also helped us. We love him very much so we found ways to manage our lives. Every six months Kevin will have an MRI. He has made it through two of the toughest years. After ten years we are home free.”

Kevin praised the Marriott and staff for giving him his dream vacation beyond his expectations. He named Resident Manager, Michael Tighe, Cathy Nelson 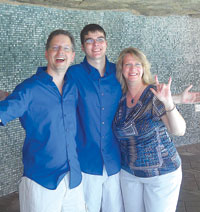 and Susan Ryziw, Executive Assistants, as the key people who arranged the wonderful experiences the family enjoyed every day and said the most exciting event was the marvelous luau party on their last evening. He declared. “I definitely want to come back. The Marriott is amazing!”

He also acknowledged Make A Wish Foundation and, in particular, Teresa Mitchell and Debbie Cook Artinian, Wish Manager for MAWF of Connecticut. They arranged his dream vacation with the Marco Island Marriott, the family’s air travel and the superb dancers from the Aloha Islander Company from the east coast of Florida.

Coastal Breeze News recognizes Kevin Moore and his family for their courage and steadfastness in the face of prolonged illness. They proudly demonstrate their love for one another and their commitment to family values in their mutual effort to confront a “terrible difficulty.” The Moore family is an inspiration to observe and an example to follow.