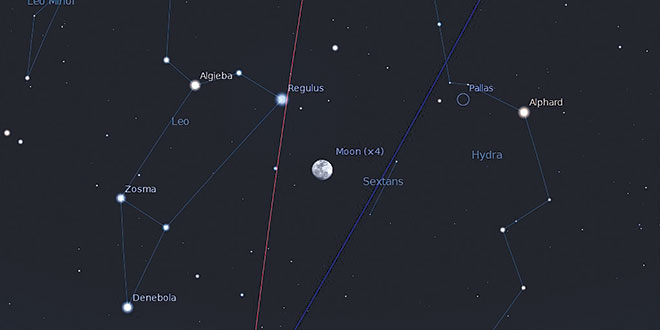 We do not often talk about the Moon in this column as it usually wipes the stars from the sky when it is present – particularly when it is nearly full. However the Moon is an interesting object in its own right and provides endless hours of entertainment for small telescope owners. In fact it is about the only heavenly object a department store telescope provides a decent view of.

It is shocking that so many misconceptions about our Moon exist; a small but significant percentage of people do not know that the Moon is plainly visible during the day nor that during some nights it is invisible. This is a consequence of its orbit around the Earth; naturally it must spend half of the time on the daylight side of our planet. Another misconception is that there is a “dark” side of the Moon. All parts of the Moon receive their fair share of solar illumination; at any given moment exactly half of the Moon is lit regardless of what phase we see down here on Earth. There is a “far side” of the Moon that we can never see from our vantage point since the Moon always keeps one side facing us, but it has been well mapped by space probes.

What is even stranger, and a lot harder to visualize, is the Moon does not “go around” the Earth in a traditional manner. From the point of view of someone standing on the Sun all satellites orbit their planets from west to east say, and at some point reverse their direction and complete the circle around the planet from east to west – fairly logical when you sit and think about it for a moment. All satellites except the Moon that is. The Moon never reverses direction! In fact it behaves much as a planet does; from the point of view of someone on the Sun the Moon circles the Sun(!) but in a series of twelve shallow waves plus the beginning of a thirteenth wave each year. (The waves are caused by the presence of the Earth).

If you do not understand all this, do not feel badly, it took humans at least five thousand years to work this out. We will return to the Moon in about two months; it’s scheduled to put on a good show during the early morning hours of April 15th.