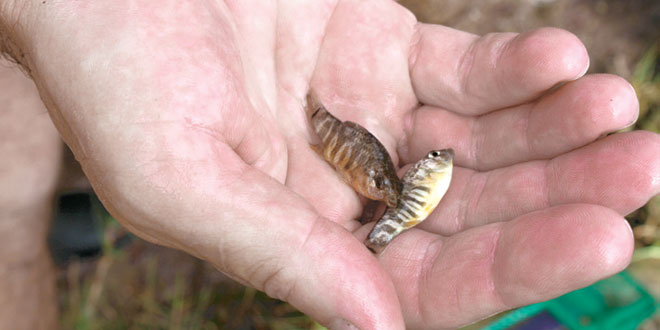 It is no secret that there is a serious problem with the mangroves that exist along San Marco Road leading to the Goodland Bridge. The problem has existed for decades. A sign has been erected explaining the issue in hopes of increasing public support. Scientists have been consistently studying the area and have come up with a solution to the devastation of what is known as Fruit Farm Creek. Now that one phase of the plan has been completed, monitoring the mangroves is more important than ever.

Scientists from the Conservancy of Southwest Florida have been monitoring the area for the last 12 years. Over a period of four years, beginning in 2000, Kathy Worley, Co-Director of Environmental Science and Biologist at the Conservancy studied the mangroves, referencing 17 plot points in various health phases. The study not only proved that the mangrove die-off was

A reference point within the die-off area is marked with white rope. PHOTOS BY NATALIE STROM/COASTAL BREEZE NEWS

getting worse, but also proved why they were dying. “What it came down to was the altered hydrology.” stated Worley.

With limited funding available, reverting the altered hydrology, or flow of water, has been separated into phases. Thanks to a donation of time and equipment by Jim Raiser of Gulf Shore Site Development in Naples, Phase 1A of the project was completed over Labor Day – the last weekend of September, 2012. The purpose of Phase 1A was to dig a trench along the north side of San Marco Road to allow movement of water within the dead areas. The ditch should allow the water in the dying area on the north side of the road to once again flow with the tides.

For Phase 1A, “we started our monitoring in the winter of last year,” explained Dr. Jeffrey Schmid, Research Manager at the Conservancy. “Then the trench was dug in late

Kathy Worley measures the diameter of a mangrove tree within a reference point.

summer. Now the idea is just to keep coming back and sampling over time to see if the fish and invertebrate community in the die-off site becomes more similar to that in our reference site. If the community shifts more to something like this, then it’s an indication of successful restoration.”

On December 4, Dr. Schmid and intern Jackie Fisher collected water samples in the “healthier” mangrove reference points along San Marco to record type, size and abundance of fish. “We’re sampling for fish you would expect to see in a mangrove forest and we are seeing some diversity here,” he explained. Four species of fish were quickly identified in just one water sample. “Whereas yesterday, when we tested the die-off site, we only found a few fish of only one type of species.

Generally, the larger the fish, the healthierthe mangrove system.

the die-off area that it would become more of a similar fish community to what you see over here and perhaps less water boatman.”

Water boatman, a water insect, along with sheepshead minnows were the only two consistent and abundant species found within the die-off area prior to the ditch. As Schmid stated, the salinity in the die-off was twice that of regular seawater. “These guys are really tolerant of high salinity so that’s why we were finding them there.”

Since the trench was dug, Schmid said they have now recorded some other species there as well. “So that’s kind of some early indications that there may be a shift in the fish community. But that’s kind of hard to say at this point due to normal changes in mangrove systems between the wet and dry season. Right now we are coming into the dry season.”

The team has also recorded every mangrove 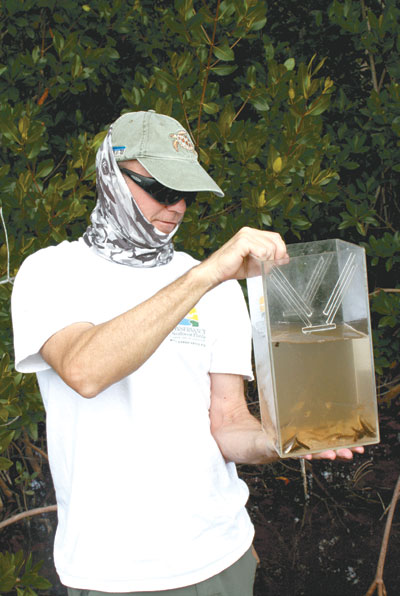 tree within every reference point. Every tree has been tagged and its diameter is measured for growth. Mangrove seedling growth is monitored as well as mangrove type. Invertebrate population is also studied. “Crabs are a good indicator of health but they move too quickly to count, so we count the holes in the ground from where they burrow,” stated Worley. “The holes help to aerate the soil, which is a sign of a healthy mangrove system.”

The mangroves will continue to be monitored in this fashion every three to four months per permitting instruction, explained Worley.

All involved hope that as the mangroves on the north side of the road come back to life, funding will be made available to complete the project by placing culverts underneath the road, which will recreate a natural tidal flow on the south side of San Marco. Between the two sides of the road, over 250 acres of mangroves are dying.