Model Railroad: Skip Merriam’s Love Not Lessened Over the Years 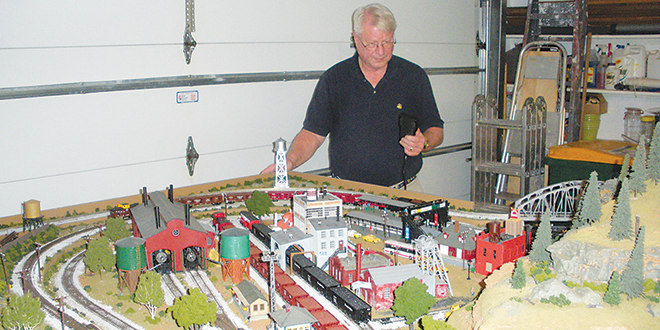 Skip Merriam developed an interest in childhood that has stayed with him for a lifetime – model railroading. The nature of his hobby can’t be missed upon entering the garage of the Marco Island home he shares with his wife. Instead of a car or two, the space is dominated by a 14-foot by 7 ½-foot model train layout sure to inspire awe in anyone who enjoyed model railroading in his youth. “Trains have been a part of my life for pretty much as long as I can remember,” said Merriam. “I’m just totally fascinated with them, especially the steam era because of the sounds and smells of steam, much different than diesel and much more powerful.” Merriam’s layout is a sophisticated sensory experience that reflects the all-encompassing impact of digital technology while providing a glimpse into yesteryear. The HO-scale (1/87th actual size) engines and some of the cars have operating lights and whistles. Smoke billows from steam engines at the touch of the button on a hand-held controller. The experience is also auditory. Steam engines chug, bells clang, horns blare and a conductor can be heard to bellow, “All aboard,” at the train station. The entire layout is of Merriam’s design, using buildings and infrastructure, such as bridges, that he built from kits. A variety of scenes are depicted: a rail yard with repair shops and a roundhouse, a fire station house, a mountain with a ranger station, a meadow with cows and a goat, coal cars ready to be unloaded at a power plant, a coal mine, a lumberyard and sawmill, a hotel, even a mock Howard Johnson restaurant. Scaled-down human figurines are found throughout, workers at the rail yard, hikers on the mountain, hobos, prisoners breaking rocks or picnickers sitting outside the Howard Johnson. “One thing I enjoy doing is the detail work,” said Merriam. He said some model railroader enthusiasts will recreate scene of actual places in their layouts, but he prefers to use his imagination. “In my case, I create scenes,” said Merriam. “They come out of my head because I want to include more than would be in a static scene. So what it really involves is a variety of little snapshot scenes, which depict a little broader scale than if you had just a freight yard.”

His interest in railroads, whether full sized or miniature, can in part be attributed to his upbringing in Schenectady, NY, at one time the home of ALCO, the American Locomotive Company, which was one of the world’s preeminent manufacturers of steam and diesel locomotives. Merriam said that in the late 1940s, when he was about five years old, a friend of his father’s who was an ALCO executive, arranged for them to tour the plant. “That’s where I saw colossal steam engines being made,” he said. “They were just giants to me.” His father, Allen Merriam, Jr. – Merriam is Allen III – also had a Lionel model train layout, which he kept behind lock and key in “the train room.” Merriam got his own model train layout when he was 13 or 14. However, his interest waned as grew older, went to college, began a career, and married and had a family. But in his mid-thirties or early forties, he built a sophisticated layout in the attic of his home in New Hampshire and exposed his three sons to the hobby. A graduate of Cornell University, Merriam is the former owner of a New Hampshire-based company that sold and serviced industrial occupational safety equipment. He sold the company in 1999 and retired to Marco in 2001, along with his wife Elaine. When his wife decided to return to work – she’s a special education teacher at Golden Gate Elementary School, Merriam began volunteering with a variety of community organizations. “But in my off time, when I was home, I started to design and built a layout,” about four years ago, he said. “With that, the bug hit and I took them (the model train cars) out of boxes and I started adding new things to it. My budget for train purchasing has gone up,” he added with a laugh. Merriam said model railroading doesn’t take up all of his free time. Instead, it’s something he might focus on intently for two or three weeks or fire up if someone wants to bring visitors by to experience it. “People will call me and want to bring their grandchildren over, but often it’s not the children who are really interested,” he said with a chuckle. Steam engines are Merriam’s favorite because they are what fascinated him as a youth. “It’s simply because it’s more intriguing watching the wheels go around,” he said. “There’s more to see, the smoke coming out and the sounds that they make.” He said diesel engines started to become commonplace in the early 1960s for economic reasons, largely due to the relatively intensive maintenance steam engines required. Full size trains are still an interest and Merriam said he and his wife have traveled by rail in most areas of the U.S., except for out West. That train-experience gap is something they plan to eliminate when his wife, who’s in her 51st year of teaching, decides to retire, he added.