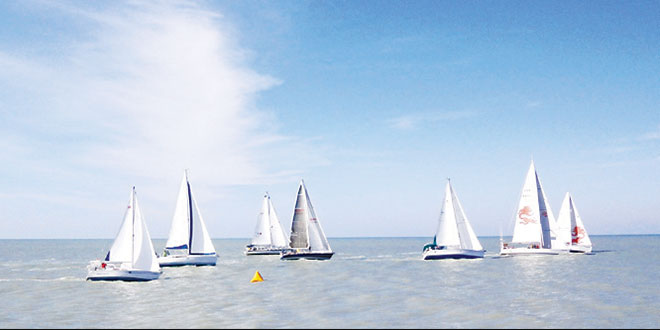 Sunshine and chilly 6-8 knot winds greeted the boats as they prepare for the start of the race. A total of 16 boats participated. Photos by Steve Gimmestad

Members of the Marco Island Yacht Club got to spend Valentine’s Day at sea with loved ones – their boats.

February 14 was the annual Marco Island Yacht Club Winter Regatta. Weather dictated a venue change for this year and the boats lined up off the Naples pier for the start of the first race at 10:30. “We had to make a call and forecasts showed up to six foot swells off Marco so we decided to move the race, “said Chuck Downton, race committee chairman. “Safety is a prime consideration as is a good course for the race. It’s a beautiful day!”

Sixteen vessels, representing a variety of boat types, cruised the pier area prior to the first race. Winds were fairly steady in the 6-8

A crew member of the T Bone greets spectators on the Naples Pier as they cross the start line.

knot range as the horn blasted for the start of the first race. “What a nice Valentine present,” said a spectator from Norway. “I was not expecting to see such beauty this morning.” (translation is not exact).

In the True Cruising class, MobyNick, skippered by John Amendola, took first place honors with Dragon Fly Plus and Dragon Fly, both skippered by Dr. Ulrich Rohde, coming in second and third respectively. “All three boats share the same dock at the Yacht Club,” laughed Chuck Downton. “I think those boats talked to each other before the race.” Dr. Rohde 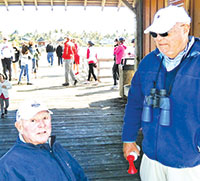 Sicotte Hamilton (seated) was the day’s Primary Race Official and discusses final prep with Chuck Downton before the first horn.

The winter regatta, in addition to providing some great competition, also benefits the Youth Sailing Program at the Marco Island Community Sailing Center. Over 100 young people participated in the Center’s sailing programs last year. The sailing programs at the Center are sponsored jointly by the City of Marco Island’s Parks and Recreation Department. This regatta raised approximately $1,000 for the Youth Program.

Full race results, along with upcoming events, can be found at golfcoastsailingclub.org.