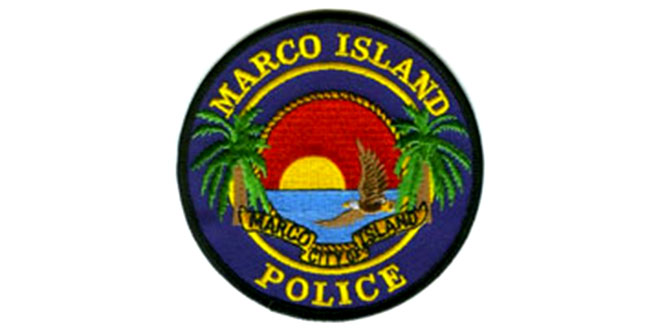 As we enter the month of April, I think that all of us on this beautiful island are looking back at a season that has been filled with fun, festivities, and busy traffic of all kinds – cars, motorcycles, scooters, bicycles, and pedestrians. Our Marco Island Police Department (MIPD) has been working very hard to keep us safe. Coastal Breeze News will be bringing readers updates from the MIPD as they become available.

Drowning Incident
On March 23 at 4:57 PM both MIPD and Marco Island Fire Rescue Department units were dispatched in reference to a medical call of a potential drowning. The units arrived at the rental home within five minutes of dispatch, where they found family members rendering emergency assistance to an 18-month-old male who had been found in the swimming pool. The child, from Champaign, Illinois, was transported to Physician’s Regional Hospital, and underwent treatment and evaluation at Naples Community Hospital. Subsequently, the child passed away. Detectives from the MIPD and the Florida Department of Children and Families are investigating the incident.

Near Drowning Call
On March 30 at 11:20 AM, Marco’s Fire Rescue, EMS and Police Department responded to a call for a near drowning incident on the 700 block of S. Collier Boulevard. A three-year-old male child, whose family is visiting the area from New York, had jumped into the swimming pool. The child was pulled out of the pool by his father, and had no loss of consciousness. The child was transported to a local hospital for evaluation.

Officer Kirsch Deployed
Recently, MIPD Officer Kirsch was deployed to Africa. A “Mustang” in the Army Reserves, Officer Kirsch is a commissioned Army officer who began his career as an enlisted soldier. The City of Marco Island fully supports any employees who are in the military reserves.

Mass Casualty Exercise
On March 20, the MIPD participated in a table top exercise on mass casualty. Along with the MIPD, the program was attended by Marco Island Fire Rescue, Collier County EMS, and representatives from school systems, and hospitals.

Beach Safety
One very important goal of the MIPD is to keep the jewel of our island, the beach, safe and pristine. Captain Baer reminds everyone of the rules of no glass on the beach, no animals (unless it is an approved service animal), no bicycles, and no fire of any type (for cooking or other purposes) on the beach. These rules exist for the safety of the people and the preservation of the beauty of Marco Island.

Follow MIPD on Twitter
Captain Baer is very proud of the Twitter feed of the MIPD and encourages everyone to follow this effective wave of communication. He feels it provides a two way street of interaction. The MIPD posts information to the public, but the public can also post pictures and information to the police. It’s just one more way of bridging the gap between the people and the police.

Department Facts
Thirty-four full time officers compose the MIPD. That includes everyone from Chief Al Schettino and Captain Dave Baer on down. Captain Baer describes the MIPD as a “lean organization” that protects and serves a community that soars to a population of over 60,000 during the busy winter season. Thousands of cars cross the Jolley Bridge to this tropical paradise on a daily basis. Marco Island has not only a residential population, but a service population as well.