MIPD: ‘Take It and Lock It’ 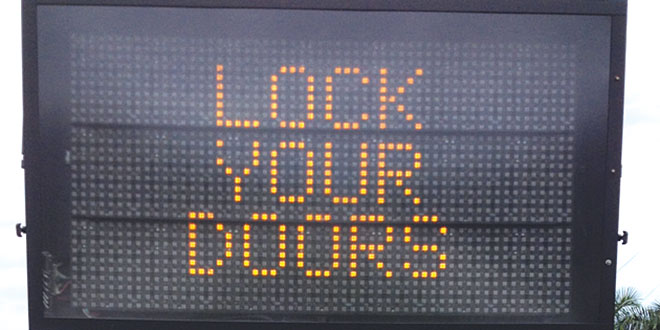 A weeklong crime spree currently is under investigation by the Marco Island Police Department. Between May 29 and June 5, a rash of residential and vehicle burglaries, as well as two vehicle thefts occurred at various locations near the south end of the island.

According to Assistant Chief of Police Dave Baer, the majority of the incidents happened over a 72-hour period, and MIPD is working with the Naples Police Department, Collier County Sheriff’s Office and the Region Six Fusion Center to solve these crimes and prevent future ones.

“The key to preventing these types of crimes is very simple,” Baer says. “Lock up. Marco Island is a very safe place to live and work, but we are not crime free. Residents must lock their doors and vehicles to avoid inviting trouble. Remove all of the valuable from your vehicles when you park them. Just lock up.”

In fact, nearly every one of the burglaries noted occurred without forced entry — via an unsecured door. Two of the three vehicles taken were stolen after the suspects located keys in the unsecured vehicle.

Baer also urges residents to call 911 immediately when they see anything suspicious. “We’ve had people tell us they didn’t want to bother us with a call. We are the police, and when you see something that is out of sorts or suspicious, please call us right away. Don’t wait.”

Here is a timeline of the burglaries:

• Thursday, May 29: A laptop computer was taken from an unsecured vehicle located on San Marco Road. While the theft occurred on May 24, it was not reported until five days later.

• Friday, May 30: A wallet was taken from an unsecured vehicle parked in the South Beach parking lot sometime between 10 AM and 3 PM.

• Monday, June 2: An unsecured vehicle was burglarized on Saxon Street, but not items were taken.

• Monday, June 2: An unsecured vehicle located on Clyburn Street was burglarized between 10 PM on June 1 and 8 AM on June 2, and prescription medication was taken.

• Monday, June 2: An unlocked vehicle on Saxon Street was entered and the keys taken sometime prior to 3 AM.

• Monday, June 2: An unlocked vehicle on Saxon Street was entered and documents taken.

• Monday, June 2: A home on Saxon Street was broken into through an unsecured garage door, and electronics 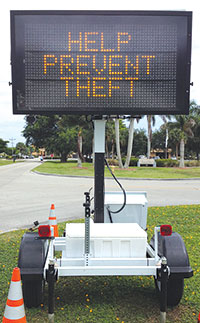 • Monday, June 2: A vehicle was burglarized on Clyburn Street between 8:05 PM on June 1 and 8:45 AM on June 2. While the vehicle reportedly was secure, there were no signs of forced entry found. Cash and other items were taken from the vehicle.

• Tuesday, June 3: A wallet and other items were taken from a vehicle on Balfour Street.

• Wednesday, June 4: A chain saw was taken from an unsecured work vehicle located on Nassau Court between 7:30 AM and 2:30 PM.

• Thursday, June 5: An unlocked vehicle was entered on Post Court, but nothing was taken.

• Thursday, June 5: An unlocked vehicle was illegally entered and cash was removed. It was located on Copperfield Court.

• Thursday, June 5: A 2008 Ford F150 Super-Duty Truck (Florida 163WSS) was stolen from a location on Jamaica Road between 5:30-6:00 AM. The vehicle was locked with no signs of forced entry. MIPD developed information that the vehicle was northbound on I-75 in northern Collier County at approximately 6:30 AM on June 5.

• Thursday, June 5: A home on Hickory Lane was burglarized through unlocked door between 2:15-2:30 AM. Nothing was taken, as the subject fled the home when heard by homeowner. The suspect was not observed, and there was no description given.

• Thursday, June 5: A home on Ivory Court was burglarized by forced entry and electronics were taken sometime between April 30 and June 5 at 10 AM. It was reported at 2:12 PM on June 5.

• Thursday, June 5: A unlocked vehicle on Moon Court was burglarized between 10 PM on June 4 and 5 AM on June 5. No items were taken.

Please call MIPD at 239-389-5050 with any information regarding these incidents.