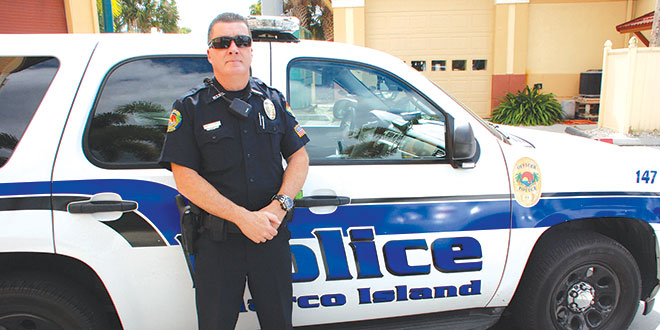 Marco Island Police Officer Emilio Rodriguez is the ultimate public servant. He spent 24 years as a fire fighter, and has been a law enforcement officer since 1996.

Now, he also is a bona fide hero. Last June, while on vacation with his wife, Kristin, and a group of friends in the British Virgin Islands, Rodriguez saved the life of his friend, Phil Reid, during a scuba diving accident. He was recognized for his actions by the MIPD and the Marco Island Police Foundation during the October “Lunch with the Chief” event. His wife and friend were on hand for the impromptu awards ceremony.

“I didn’t know I was getting an award,” Rodriguez says. “I thought I was just going there for the luncheon. They kept my wife and Phil away until that minute, and – when I saw them walk in, I was wondering why they were there. It was a good surprise.”

To be sure, Rodriguez has always been on the job. The Naples native and Lely High School graduate served in the U.S. Army for six years in the 101st Airborne Division, but when he got out of the Army, he wasn’t sure what path to take next.

“I stumbled onto the fire department when I got out of the military,” he explains. “I wasn’t sure what I wanted to do, but I knew I wanted to be active and hands on. I answered an ad in the newspaper, and went to work for the Division of Forestry in 1990 as a wildlife firefighter. I found my niche.”

Then, Rodriguez decided he wanted to be a police officer too. It took six months of nights and Saturdays at the police academy, but he became an auxiliary police officer, while also working full-time as a fire fighter at the Isles of Capri Fire-Rescue District. That was 18 years ago.

He started out his law enforcement career with the Florida Marine Patrol, and remained there when it merged with the Florida Fish and Wildlife Conservation Commission. He moved over to MIPD in 2002, volunteering a minimum of 16 hours of his free time each week as an auxiliary officer.

Today, Rodriguez is retired from fire fighting, and he works part-time with the MIPD as a community service officer, patrolling the beaches, schools, commercial areas and serving on the bike patrol.

Rodriguez used all of his training as both a fire fighter and police officer on that fateful day last June when his friend nearly died during a deep dive of The RMS Rhone, a British packet ship that wrecked and sank in 85 feet of water off of the coast of Salt Island in the British Virgin Islands in 1867.

Here is the account of the event in his own words: “In June, we take a vacation to BVI with eight friends. We rent a 48 Sail Cat, and sail around the islands. It is a nine-day trip. On the second to last day of the trip, four of us decided to dive to do a deep dive of The Rhone…We went down with the dive instructor. It was a beautiful dive, a perfect day. When the dive was almost over, Phil looked at dive master and signaled that he didn’t feel good and wanted to go up. The instructor signaled that they were going up, and told me to stay put. Something told me that something wasn’t right, though. They were 20 feet above me and swimming slowly.They got about 10 feet below the surface, and Phil went limp. I shot up. The alarm on my dive computer going off telling me I was moving too fast.

When I reached them, Phil was limp and purple, and we had to get him into the boat. There was me, the dive master (who was female) and another female on the boat. Phil was 200 lbs plus his dive gear. We shoved him onto the platform, and I immediately did CPR. There ws no pulse, and he was not breathing. He was dead. I didn’t think I would be able to bring him back. There was no medical equipment on the boat, just oxygen. I continued to do CPR and ventilation, and I finally got a faint pulse. I continued to breathe for him for another minute until he was breathing on his own. It took the rescue boat an hour to get there. By that time, he was responsive and could squeeze my hand. His eyes were open.

We were 10 miles off-shore. I road in the rescue boat and ambulance with him. The hospital admitted us both, me for the possible bends. They laid us out together in the ER, and we began joking around. Phil stayed at the hospital for five days before they allowed him to travel home; he stayed in the ICU. They found no signs of heart attack. The only thing that we can figure is that he got bad air in the tank. It was possibly not filled properly. He said felt super calm before he went out, and that sounds like carbon monoxide poisoning. His doctor here at home said he didn’t have a heart attack either…I look at it as two major events. He became unconscious underwater, and he swallowed water. It just wasn’t his time to go. He is in physical good shape; we go to the gym everyday. He is always on the bike.”

Phil fully recovered, and is ready to try to dive The Rhone again. According to Rodriguez, they already are planning their annual trip to BVI. “Phil said he wants to finish the dive,” Rodriguez says. “I told him I am there with you.”

A little wiser this time, though. He adds that from now on when they dive they are going to have an air tester with them to test the air in the tanks and have a carbon monoxide alarm on the tanks. “We will take every precaution we can…Now, we will be better prepared,” notes Rodriguez.

Still, the memory of the rescuing his close friend has remained with Rodriguez: “I have been a diver for 20 years. I was diver at the fire department, and you just don’t think about it. You just do it, but this was the first time I have ever had to perform a rescue for a friend. I had never experienced that before. Coming down from the high of the rescue, you think you were just doing your job, but I see him everyday. It is really hard to put words to it. I am just glad I could focus and do what I have been doing for so many years.”