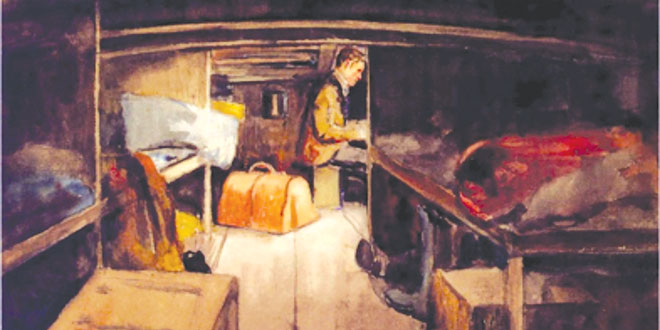 Painting of Cushing inside the Silver Spray painted by Wells Sawyer

During its Aug. 1 regular meeting, the city of Marco Island Planning Board approved a proposal from the Marco Island Historical Society (MIHS) to name 11 currently unnamed alleys around the island after major players in Marco’s history. With a vote of 6-1, the proposal was passed onto City Council, but council has yet to set a date to review and consider the proposal.

An initiative of the MIHS, the proposal will help mark the 50th anniversary of modern Marco, which begins January 2015. Society members believe it is a good time to acknowledge the contributions of local historical figures who were not already recognized in some way around the island. The resulting list includes modern Marco marvels, early island pioneers and important figures from the Key Marco Cat and Cushing expeditions.

Involved in this process was local attorney and Marco Island historian Craig Woodward, who suggested the idea, as well as local realtor Paul Tateo, who like Woodward grew up on the Island. In addition, MIHS members Austin Bell (Curator of Collections), Kathy Miracco and President Tom Wagor assisted in the suggestion of some of the names.

Coastal Breeze News is examining the MIHS’s alley proposal in depth through the words and pictures collected and written by Woodward. In this issue, we will wrap up with the key figures from the Key Marco Cat and Cushing expeditions.

In 1976, Marion Gilliland published her book “Material Culture of Key Marco, Florida.” It was the story of the 1896 expedition headed by Frank Hamilton Cushing, and it highlighted his remarkable findings. Previously, there was little local knowledge about this dig, and no local streets were named for those involved until the 1990’s, when the street entering Tommie Barfield School was renamed after Cushing. There were other key participants the MIHS believes should be honored. Gilliland described it as follows: “…this site remains unique. 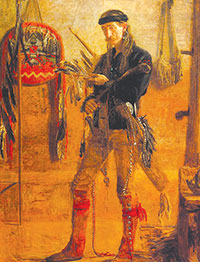 Courtesy of the Gilcrease Museum “Portrait of Frank Hamilton Cushing,” oil on canvas, by the American artist Thomas Eakins.

The quality, beauty and sophistication of the art work has never been surpassed.”

Alley No. 8, a 2,000-foot stretch of pavement located behind Marco Island Florida from San Marco Road Hawaii Court, will be named Silver Spray Way for the vessel Silver Spray that brought Cushing and his expedition to Marco in 1896. Cushing met all of the other members of the expedition in Tarpon Springs when they boarded the Silver Spray, a 2,187-ton schooner with six sails. It was one of a fleet of sponging vessels owned by Jacob Disston, whose brother, Hamilton, was at one time the single largest land owner in the United States having acquired 4 million acres of Florida land including what would later become the city of Naples.

The expedition left Tarpon Springs on Feb. 23, 1896, and made a quick stop in Charlotte Harbor, arriving in Old Marco (then “Key Marco”) three days later. The boat had a sailing master, a mate, a cook with an assistant and four “able seaman.” The Silver Spray was moored in Old Marco during the dig and used as their headquarters. In one water color, Wells Sawyer captured Cushing sitting in his berth writing in his diary, and Sawyer himself wrote a number of letters from the ship.

After working tirelessly in the heat, mosquitoes and mud to uncover treasures for almost a month, the expedition left Marco on April 19. By May 10, Cushing had left the Silver Spray in Tarpon Springs and shipped 11 barrels and 59 boxes of specimens from Key Marco. More than 2,000 objects of shell, wood, fiber and pottery were found in a small area of Old Marco called by Cushing the “Court of the Pile Dwellers.”

A number of streets on Marco have been named to commemorate this important archaeological find, including Cushing Way and Calusa Court. Still, the MIHS feels that given the new Marco Island Historical Museum’s 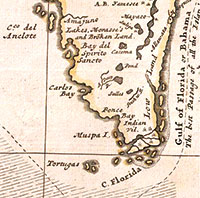 emphasis on these discoveries, naming some additional streets is appropriate.

Alley No. 9, a 1,200-foot stretch of alley located behind NeNe’s Kitchen, Joey’s Pizza & Pasta House and Kwik Stop from Amazon Court to Saturn Court, is set to be named Durnford Way for British Lt. Col. C.D. Durnford. In 1895, Durnford was digging in the area of the Calusa Canal (the “Old Indian Ditch”) in Naples when he got word and came to Marco to see what items Capt. W.D. Collier had pulled from the muck of Old Marco. Durnford found a wood trencher with carved handles, a clam shell funnel, netting of three-ply cord, 20-30 float pegs, etc.

Before leaving for England in April, Durnford stopped in Philadelphia at the University of Pennsylvania and happened to run into Cushing and Dr. William Pepper, president of the Archaeology Department. By May 1895, Cushing was in Southwest Florida, and on June 3, 1895, he reached Marco Island for the first time, where he made a preliminary investigation of the site. His initial findings resulted in his 1896 expedition.

Durnford published the first article on Marco Island archaeology in “American Naturalist” (Nov. 1895). The artifacts uncovered by Durnford now reside in the British Museum in London. His chance expedition to the Key Marco site, along with his influence and connections at the University of Pennsylvania, started the momentum that resulted in the discovery of more than 2,000 artifacts here on Marco Island.

Alley No. 10, a 1,200-foot alleyway located behind Stonewalls and Alvin’s Island from South Collier Boulevard to Landmark Street, would be named for Wells Sawyer Way for the artist on the Cushing Expedition. We owe much of our knowledge of the Key Marco expedition to 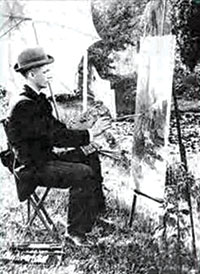 Sawyer, who painted original watercolors on-site of the wooden masks and objects and created a detailed topographical map of Old Marco showing the location of the dig site. He also took numerous photographs of the expedition, which now are housed at the Smithsonian Institution’s National Anthropological Archives.

Sawyer’s 1896 landscape paintings of Marco, as well as his correspondence from the dig, are crucial components of the historical record. When he joined the expedition at age 32, Sawyer was an artist in the employ of the U.S. Geological Survey where he had become an expert paleontological illustrator, while continuing his passion for landscape painting and photography. His letters home contained descriptions of early Marco Island, of the mangroves and fishing, and included his description of what we now refer to as the Key Marco Cat: “In the small carved statuette of a ‘mountain lion god’ the workmanship is so exquisite that the best Swiss carver of today could scarcely give it a better finish, and the design was so dignified and the convention so subservient that the best Egyptian work was suggested. The little figure is scarcely eight inches high, yet it has the dignity of a colossus. It is made of a light colored wood which upon drying has checked but slightly.”

The Key Marco Cat is dated 500-800 A.D. Sawyer was a gifted artist in other ways as well. He wrote a poem full of excitement when the expedition left on the Silver Spray sailing south for Marco, and Sawyer was present at the funeral of Cushing, who died at his home in Washington D.C. at age 42 in April 1900. It was Sawyer who wrote a memoriam for that occasion. Sawyer died in 1960 in Sarasota after a lifetime as a professional artist.

Alley No. 11, an 1,800-foot stretch of road behind Sasso’s and the Sea Turtle parking lot from Winterberry Drive to Valley Avenue, is set 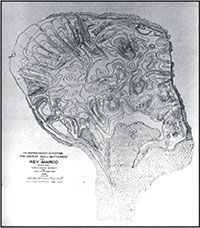 to be named Muspa for the Muspa Indians who were the predecessors to the Calusa. Although not as well known as the Calusa, the Muspa lived on Marco Island (and the area immediately south to Cape Romano) between 500 B.C. and A.D. 1300.

The Muspa culture is known by the pottery styles of the “Glades” region — known for decorated stylistic designs — as opposed to the pottery found north of here in the Caloosahatchee region dominated by the Calusa Indians — known for plain, undecorated pottery. Early European maps and written accounts also identify Marco and its location as “Muspa,” “Muspa Island,” “La Muspa” or “Punta de Muspa”. At some point, believed to be around A.D. 1300, the Muspa were conquered by or allied with the Calusa and possibly merged into Calusa culture. Later, Muspa was given as a name of a Calusa “town” in an account dated 1575 from a Spaniard, Hernando de Escalante Fontaneda, who had been rescued from living with the Calusa for 17 years from 1550 to 1567.

At an archaeological site in Old Marco (at the present day Eagles Retreat Condominiums), which MIHS helped excavate in 1995 with volunteers, pottery was discovered that was in use between A.D. 500 and 900, meaning it was most likely used or made by the Muspa. Cushing’s Key Marco site, also in Old Marco, is often automatically attributed to the Calusa, but is possibly “Glades” or “Muspa,” depending on the controversial radiocarbon dates from the site.

After attempts to Christianize the Indians of Southwest Florida by the Spanish, a Spanish captain brought the Chief of the Carlos (Calusa), his brother and other “Indians of importance totaling 270” to Havana to be saved in the Christian faith in 1710. Included on that trip were the chiefs of five named towns, including the Muspa Chief. The Chief of Muspa and up to 200 other Indians died from disease in Cuba and did not return to Florida.