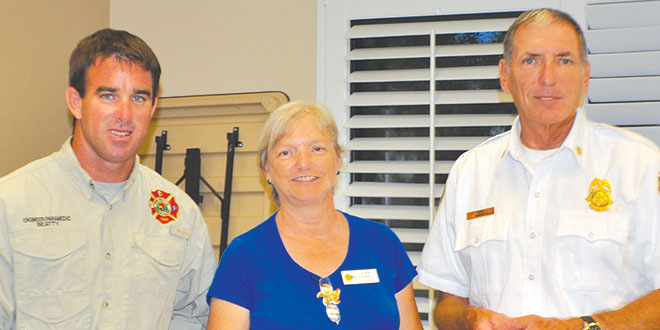 They detailed “MERT” — the Marine Emergency Response Team — and the new fireboat 50. The rescue boat is 34’3” long, weighs 11,800 pounds and is driven by twin jet drive diesels capable of a speed of 45 miles per hour. It has a flat bottom and can run in water only 12 inches deep. Having a solid stern platform, rescue victims can be easily lifted from the water on to the boat and given emergency first aid. Since its delivery on February 3, the team has answered more than 50 emergency distress calls on the water.

Marco Cruise Club members were given many good tips for practicing and maintaining safety while at sea, and MCC officials and members would like to thank Chief Murphy and Beatty for an excellent presentation.

MCC was founded in 1975 and is one of the oldest boating clubs on Marco Island. Boating enthusiasts are welcome to join. For information, go to marcocruiseclub.com, or call Joe Hirschenberger at 239-642-9087 or Commodore Joan Kenney at 239-389-2528.