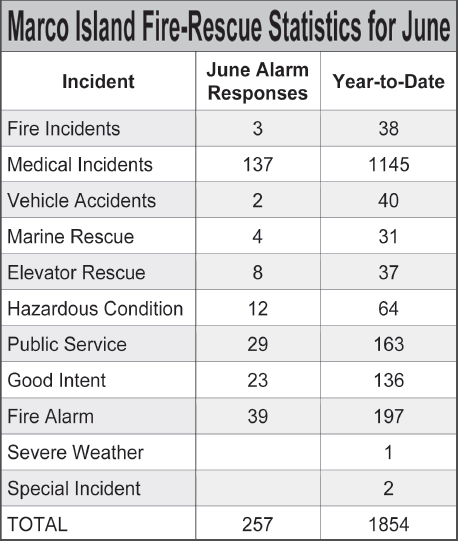 Six months into 2014 and the Marco Island Fire-Rescue Department has been busier than ever.

At the Aug. 4 City Council meeting, MIFRD Chief Mike Murphy reported that through June the department had answered 1854 total calls, ranging from fire alarms and incidents to medical calls to marine rescues.

This accounts for a 6.5 percent increase over the same period of time last year.

Moreover, occurrences of concurrent overlapping emergency calls are up 38 percent over 2013. For all of 2013, MIFRD had 683 overlapping incidents; for the first six months of 2014, the department has experienced 524 overlapping concurrent incidents.

The news of the increased call volume was somewhat tempered by the announcement that the department’s Quick Response Vehicle (QRV) was delivered on July 10 and was put into service just six days later.

The vehicle had an immediate impact when the MIFRD received three concurrent medical emergencies. The QRV was able to respond within 2-4 minutes. The off-island ambulance response time to one of these emergency incidents was 16 minutes.

In its first week of operation, the QRV responded to 29 emergency calls on Marco Island.