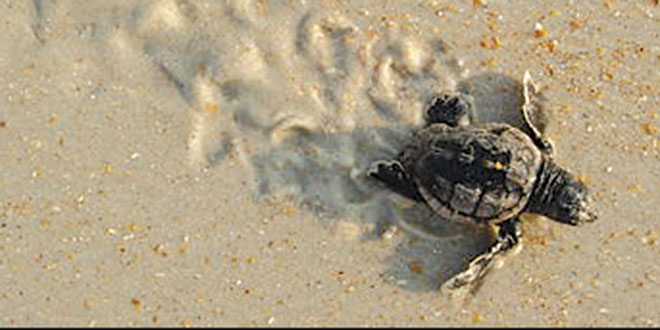 A sea turtle hatchling swims to the water at Guana Tolomato Mantanzas Research Reserve. PHOTO SUBMITTED BY THE DEP

For the last three months, Mary Kelly Nelson has been busy combing the beaches of Marco Island searching for evidence of Loggerhead sea turtle nests for Collier County’s Natural Resources Department. She has not been disappointed.

Thus far, Nelson has found 68 turtle nests on Marco’s shore, down from 87 during the same time period last year. Even so, false crawls — tracks or other signs left in the sand by a sea turtle who has abandoned its attempt to nest — are down from 156 at this time last year to 97 this year. Two nests have hatched, down from five last year.

“I think it is a good average season,” Nelson explains. “The interesting thing is the numbers are going up across the board for the last three years. It is really encouraging. For the 10 years prior to that, the number of nests were going down, but Marco has remained pretty steady through the whole period.”

Collier County tracks sea turtle nesting activity from May until the end of October each year at a number of its beaches. All told, the number of turtle nest found May through July is up from 983 in 2013 to 1223 this year. Hatching activity has more than doubled from 26 last year to 59 this year, and false crawls only differ marginally year to year with 1319 last year and 1305 this year.

Nelson attributes the bounce back to resident compliance with lighting restrictions on the beaches: “This program has been going on for the last 20 years, and people are becoming aware that their lights cause problems…I would like to think all of our hard work is paying off.”

The false crawls still give her pause, though. While many believe that turtles seek beach front nesting areas that have a lot of vegetation and are above the high-water line where the sand is the highest, no one knows for sure what they are looking for, notes Nelson. She also believes beach renourishment projects may cause confusion for some of the sea turtles.

“When they are on the beach, if there is noise or lights, it is frightening for them to come out of the water,” she adds. “They can’t move very fast, and they feel like they are in danger. Many of our beaches are renourished and raked too. The sand is not the same as it was 20 years ago.”