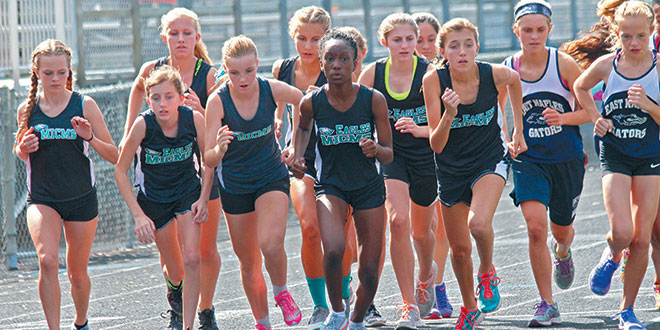 Photos by Roger LaLonde and Patricia PolingAnd they’re off! MICMS girls vie for position in the 1,600-meter run.

The top two finishers in each event advanced to the middle school championships on April 30 at Naples High School. Those finishing in third and fourth positions had to wait out the other two county qualifying events to see if they had better marks to advance.

It was all about qualifying individually 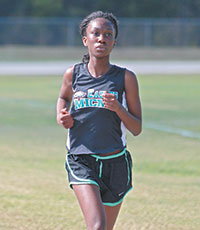 Dayna Dorestin is all alone as she wins the 200-meter run.

and by relay teams. Should the scores have counted toward a team, the girls won and the boys came in second, behind Manatee.

Charter‘s premiere runner Ryenn Hart had no problem winning the 1,600 and 3,200-meter runs. It was made easier when her major challenger, Jillian Dempsey of East Naples, did not compete. She chose to attend another sports event, which means she does not qualify for the championships on Saturday.

“We have had good competition and I beat her the last time we raced,” Hart said. 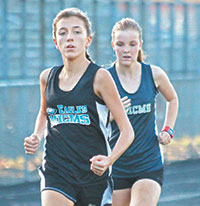 Ryenn Hart (front) and Ellie Poling stay together in the 3,200-meter run.

“I’m not sure who I will be going against (on Saturday). I will just run my race.”

Ellie Ball made it interesting in the long jump. Not so much the jump, but if she would even compete. She was with some other teammates who went to Golden Gate High School first, rather than Lely. Field events went off first.

Fortunately she arrived in time to win the long jump with a leap of 12 feet, 10 inches.

Dillan Fahey recorded a good distance in the long jump, but does not move on the Collier Middle Schools Track and Field Championships.

Michael Mertens led the boys with a win in the 1,600-meter run.

Mertens, Johnny Watt, Kevin Barry and Steve Snover qualified by racing to second place in the 4 x 400. Watt was second in the 3,200.

Allie Greaves qualified in the 400-meter run by placing second. She joined Elyse Prodanov, Jenna Palumbo and Hart to qualify in the 4 x 400 relay by finishing second.