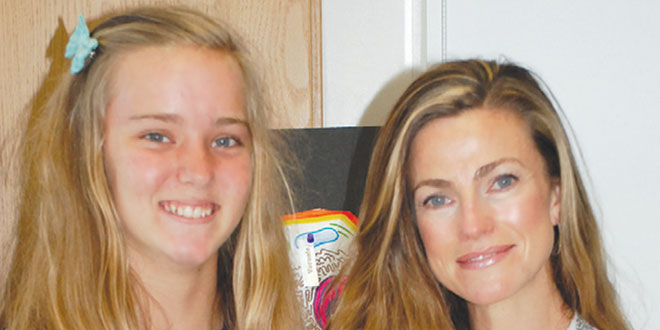 “If we’re going to out-innovate and out-educate the rest of the world, we’ve got to open doors for everyone. We need all hands on deck, and that means clearing hurdles for women and girls as they navigate careers in science, technology, engineering and math.” – First Lady Michelle Obama, Sept. 26, 2011

At a time when more than 80 percent of girls are interested in science, technology, engineering and mathematics (STEM) careers but only 13 percent choose a STEM field for their career, Laura Poelstrap is leading the way at Marco Island Charter Middle School.

The shy, quietly confident seventh-grader has been nominated for the chance to attend Tech Trek, a highly-competitive week-long science, technology, engineering and mathematics summer camp for rising eighth-grade girls sponsored by the State of Florida American Association of University Women (AAUW). Originally from Pembroke Pines, Poelstrap is new to MICMS this year, but she quickly made an impression on her science teacher, Mary Jo O’Regan, who nominated her for the camp.

“I nominated her for the engineering component,” says O’Regan, who teaches life science, as well as some physics and chemistry at MICMS. “Laura stood out to me when they talked about girls who were interested in STEM. She does well with formulas and organization — step by step processes. Her attention is scary. She is very well-focused. Really anything you could want in a student, she is it.”

Through Tech Trek, girls are immersed in a world that empowers and encourages them to think about themselves as future scientists, engineers, mathematicians and computer specialists. AAUW of California member Marie Wolbach founded Tech Trek in 1998 with the help of an AAUW Community Action Grant. For the last 15 years, AAUW of California has grown Tech Trek to 10 camps on eight college campuses across the state.

Tech Trek attendees spend a week on a college or university campus, and the campers attend either a math or science core class daily as well as hands-on workshops, many of which are run by women STEM professionals. Campers take part in activities like building and programming robots, extracting their own DNA, and learning how computer simulations are used to predict weather patterns. A day-long field trip provides girls with a chance to learn about a STEM profession in person and witness a STEM workplace environment.

All Tech Trek camps also include a Professional Women’s Night where women STEM professionals speak to the girls about their educational and career paths. These women serve as role models and provide key insights into the successes and challenges of working in a traditionally male-dominated field.

A study of the program found that Tech Trek significantly increased girls’ self-confidence and their interest in and excitement about the STEM fields. Additionally, surveys from Tech Trek-California alumnae demonstrate the impact of the camp experience on their own educational and professional paths. Tech Trek alumnae:

• Attend college at a higher rate than the national average

Families pay only a $50 fee to send a girl to camp, ensuring that girls from a range of backgrounds are able to attend. The total per-camper cost for AAUW is $850.

Still, Poelstrap has a way to go before she knows whether or not she will get to attend Tech Trek. “This process is very much like applying to college,” admits Coral Miller, a local member of the AAUW-Florida.

It is a three-step process, which begins with a nomination by their seventh-grade math and science teachers. From there, the candidates are reviewed by a selection committee, and a letter is sent to those who meet the initial requirements.

Step two is the interviews with the nominee and her parents. Girls and parents are interviewed separately by two AAUW members. Once the interviews are completed, the interview committee meets to rank each candidate with the overall criteria being which girl would most profit from the Tech Trek experience. Each candidate scored based on a scale of 1-3 with 1 being an “excellent candidate,” 2 being a “good candidate,” and 3 being a “poor candidate.”

Finally, candidates must write an essay about why they want to attend Tech Trek and what they feel they would gain from going — much like the essays written for college applications. Essays are scored on the same 1-3 scale as the interviews. Students receive a letter when the selection process is completed.

Poelstrap has passed steps one and two and will learn later this month whether she is accepted or not. Either way, she is excited about the prospect of attending Tech Trek. “Science is interesting to learn about,” she says. “Math is simple to understand because there is a set way to do it.”

O’Regan believes Poelstrap is a strong candidate not just because of her interests in STEM fields, but also because she is a “well-rounded” student with a strong work ethic. In addition to loving school and to read, Poelstrap is an athlete, playing volleyball, soccer and running track.

“Laura excels in every subject,” says O’Regan. “She loves a challenge. The more difficult the assignment, I see her eyes get brighter. When I raise the bar, she rises to the occasion.”

Moreover, O’Regan feels attending Tech Trek would be an opportunity of a young lifetime for a girl interested in STEM fields, which have historically been male-dominated and left girls and women intimidated: “I want (girls) to know that (STEM) is not just for men. Many scientific occupations are open to women, and we need to encourage girls. They need to be nurtured, and it is easier to learn when they are younger.”