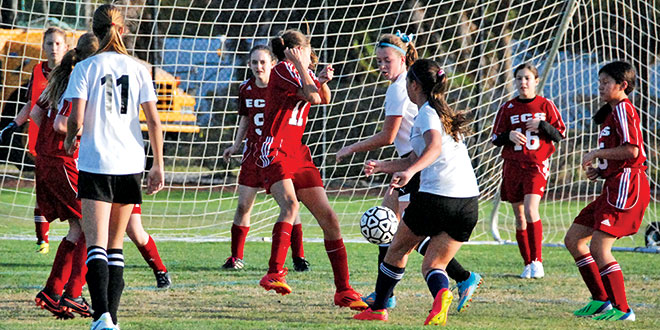 It was beautiful afternoon for a soccer game on Friday, Jan. 9.

Led by a strong backbone of eighth graders and second-year Head Coach Patrick Baldwin, the Eagles won handily 6-1 and brought the first conference championship in any sport back to MICMS since 2009. 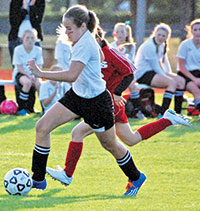 athletes. For this game, players from the Optimist Club’s rec league walked out with the Eagles for the opening ceremonies and singing of the “Star-Spangled Banner.”

“We just thought it would be a nice way to reach out to the community and get them involved,” explains Baldwin. “We wanted to show the boys and girls a quality game that they probably have never seen on Marco before.”

The championship match capped off an electrifying 11-v-11season for the MICMS girls in the GCAC, a conference composed of private schools in Collier and Lee counties. The Eagles finished the season 12-0 in conference play with a total of 70 goals scored and 98 total assists. Only two goals

were scored against the team, and those were on penalty shots.

Road to the Championship

The championship season came as no surprise to Baldwin. “When I took over last season, I thought we could be championship material,” he remembers.

So, he encouraged his team to set the bar high at the beginning of the 2014-2015 season. The girls wanted to leave their mark by winning the GCAC and hoisting a championship banner in the gym at MICMS. The school’s last banner was won six years ago.

This banner thing was real important for the girls. For some reason, it’s all they talk about,” Baldwin notes. “We talked all the time about being in the moment and how we 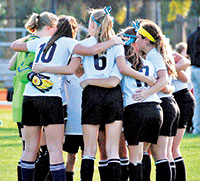 Still, the road to the championship was not easy. First, many of the girls on the team had no played 11-v-11 soccer before, despite having the played the game throughout their childhoods. As a result, it was like learning how to play a new game with tactics, positioning and spacing that were foreign to the players.

Eighth-grader Teagan Havemeir remembers very well. “Since we had so many girls, we had to learn what positions everyone was 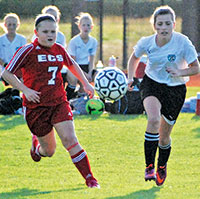 best at, and it took a lot of maneuvering until we got everyone situated,” she says.

She adds that it also took the girls some time to get used to playing with one another: “Even though many of us knew each other’s names, it still took a while for people to open up and become familiar with passing to people who they generally never talked to outside of practice.”

Finally, some of the players were not used to the conditioning it takes to play on a regulation-size soccer field, which can measure between 100-130 yards. That means depending on the player’s position on the field she can run an average of 3-4 miles during a single game all while hawking down the ball and

The team overcame these challenges together, though, Havemeir points out, with positive attitudes, hard work on and off the field and great coaching. “We all encouraged each other even when we messed up,” she says.

Baldwin also credits the team’s on-the-field leadership as playing an important role in its success. “We have been successful this season because we are led by our mid-field which are all eighth graders,” he says. “Our captains Lola Wesson and Abi Merideth anchor the center, and our outside halfbacks — Teagan Havemeier, Morgan Jones, Laura Polestrap and Miranda Webb — all understand the game. They can control the middle of the field. We play very 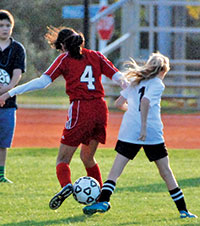 unselfishly, where in previous seasons or teams that I have coached we did not.”

An aggressive and tough defense made up mostly of seventh graders backed up the leadership. “Our defense is most importantly intelligent, and they understand spacing and team defense structure through communication,” adds Baldwin.

The cherry on top for the MICMS girls: a group of fast sixth-graders who can score. “They should keep us strong for the next few years,” he emphasizes.

Ultimately, though, the team’s success was the product of a passion each girl has for the game of soccer. Almost the entire team finds a way to play soccer year-round whether on recreational leagues or championship traveling club teams throughout Southwest 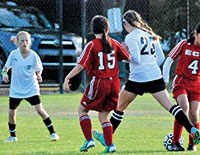 In fact, three members of the Eagles play with the Florida Fire Juniors, a developmental and traveling soccer club that is affiliated with Major League Soccer’s Chicago Fire. One plays with tournament-based Naples Accurri, one with the San Carlos Scorpions and 16 with the Optimist Club of Marco Island.

“I call these girls rink rats!” quips Baldwin, who hails from Boston. “A rink rat is a hockey term we use up north for kids that will practice anytime or any opportunity they can. They will just show up at the field and play, and that’s what 85 percent of these girls do…(S)eriously, these girls love soccer.”

“With these girls playing for other clubs, it just means they are training and getting the extra work 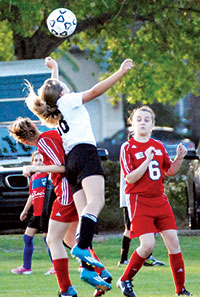 in,” he notes. “They are learning that practicing and hard work will pay out in the end.”

For Havemier and teammates, she believes the biggest lesson they learned from their championship run was “you get out what you put in…We gave it our all, and in return we got all we could have ever wanted: a trophy and ourselves to thank for it.”

“At this level, young athletes are getting their first taste of what they can accomplish as a team,” she adds. “They work so hard to get to where they are, and they want something to show what they have done has been worth it. Winning the championship shows them how far they have 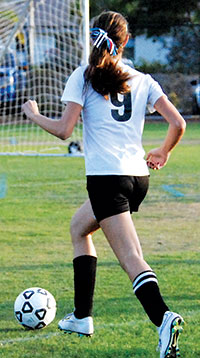 come and how much more they can do if they continue to work as hard as they have been.”

To be sure, the hard work is not over for the MICMS Girls Soccer Team. Right after winning the GCAC championship, the team began its Collier County Athletic Conference (CCAC) season, and is now playing against public school’s in the area in hopes of achieving its second major goal of the season: raising a second championship banner.