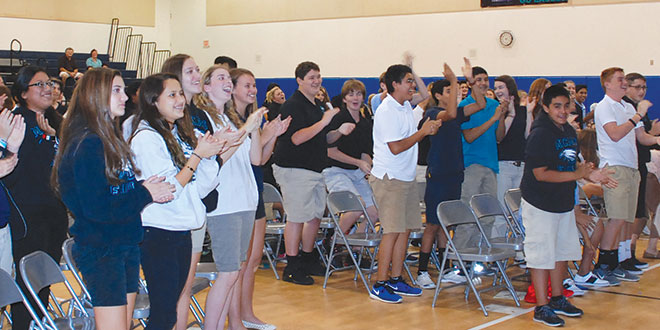 June 4 marked the end of the school year for Collier County Public Schools. It also marked a milestone in the educational careers of Marco Island Charter Middle School’s 2014 eighth-grade class — the annual promotion ceremony. This year, MICMS sent 139 students onto high school during its 16th such ceremony, 35 with high honors and 44 with honors.

Held in the gymnasium, the evening’s event was marked by a processional of the students accompanied by the traditional graduation song “Pomp and Circumstance,” a warm welcome by Principal George Abounader, student remarks, the presentation of promotion certificates and academic awards

by School Board President Tarik Ayasun and closing remarks by Abounader.

The promotional ceremony closed out the last few days of school for the eighth graders, which included final exams and an awards presentation for the students. Teachers in every subject — academic and elective — gave students awards for achievement, participation and improvement. Throughout the awards presentation, students performed for their classmates, including Bailey Sparks, Chelsey Perez, Josiah Hurtley, Logan Smith, Lorry Lyn Sullivan and Natalie Hughes. Smith’s rousing rendition of “Toast,” in which he played rhythm on a toaster with spoons, had the entire class on its feet.

The highlight of the

promotion ceremony was personal speeches given by students Ethan Dorestin, Jordan Vann, Pilar Forrest and Matea Denisen. While each student waxed poetic and philosophic about their experiences at MICMS, they did impart some words of wisdom — in some cases very impressively — that reached beyond their tender adolescent ages.

Dorestin talked about being part of “a program that is bigger than any single individual.” He emphasized that school is “more than a pencil, paper and calculator,” that is it about “life lessons,” and that showed him and his classmates “how to keep moving and going strong.” He was even wistful about looking

back at his time at MICMS and smiling, and was certain about moving onto high school when he said, “I know I am ready and so is everyone here.”

Vann remembered being an awkward and shy sixth grader when she first came to MICMS and shared some of her favorite memories of all three years at the school. She joked about eighth grade being “the year that we never stopped testing,” and noted that despite the brain pounding they all took they all survived and “swam through the waves that threatened to drag us down.”

Forrest likened her middle school experience to a game

of chess and talked about her evolution of the last three years from a pawn to the queen. She thanked her teachers for giving her and her classmates knowledge and a fighting chance and for opening the door for all of their future successes. She closed with a quote from Mahatma Gandhi: “In a gentle way, you can shake the world,” and she thanked her family for shaking her world.

Denisen thanked her family and especially her mom for all of the love and support they had given her while she was a student at MICMS. She also expressed her gratitude for the

“wonderful moments,” “exciting memories” and “remarkable people” that she experienced in the hallowed hall of MICMS. 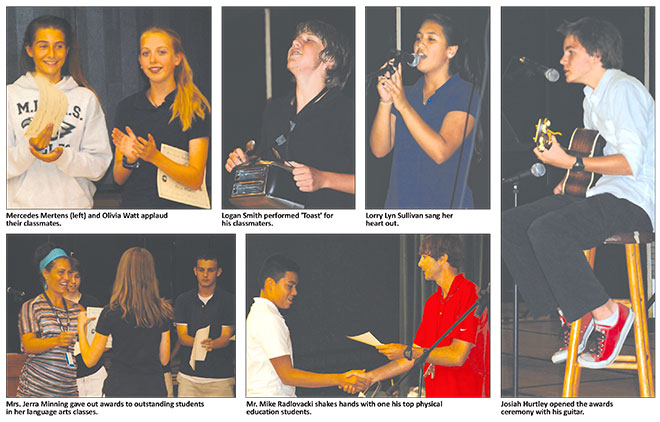 Vann translated the emotion and expectation of the promotional ceremony best with parting words she quoted from Robert Frost: “In three words, I can sum up everything I’ve learned about life: it goes on.”

Indeed it does, and for these students, let’s hope it goes on to bigger, better and brighter futures.