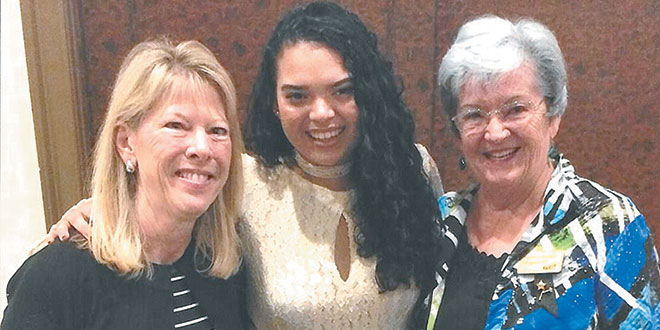 The prestigious P.E.O. STAR Scholarship, for the 2016-2017 academic year, was presented to Duneshka Cruz, a senior at Marco Island Academy (MIA). The scholarship was presented to her at the MIA Awards Ceremony by Barbara Markel, a representative of the local P.E.O. Chapter.

Duneshka was recommended for this scholarship by Chapter GT of Marco Island. She will be attending the Penn State Schreyer Honors College, where she plans to study Forensic Science and Pre-Med.

The P.E.O. STAR Scholarship is a $2,500 scholarship based on excellence in leadership, extracurricular activities, community service, academics and potential for future success. The program is open to young women who are citizens or legal permanent residents of the United States or Canada and who are graduating high school seniors at the time of application. A student must be recommended by a P.E.O. Chapter. Duneshka was one of 400 recipients chosen from 1,933 applicants submitted nationwide, by local chapters in the United States and Canada. Chapter GT is proud of this outstanding young woman.

The P.E.O. Sisterhood, founded January 21, 1869, at Iowa Wesleyan College, Mount Pleasant, Iowa, is an international philanthropic and educational organization which promotes increased educational opportunities for women. There are nearly 6,000 local Chapters in the United States and Canada with almost 250,000 initiated members. The P.E.O. Sisterhood has provided over $280 million in financial assistance to over 98,000 recipients. The Sisterhood also owns Colley College, a fully accredited, private liberal arts and sciences college for women, with two-year and selected four-year programs, located in Nevada, Missouri. It is truly an organization of women, by women and for women.