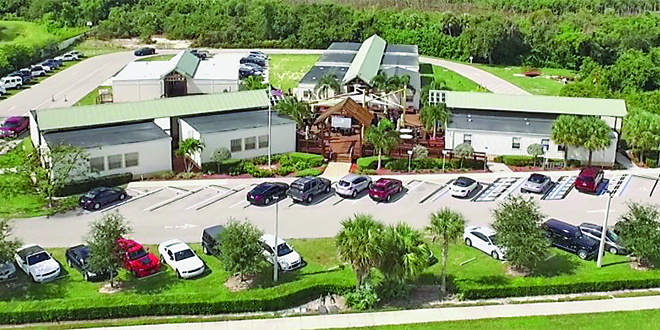 Submitted PhotoA bucolic view of MIA’s campus B.B. (Before Buzzards). The entire school is housed in ten modules, four of which the school leases but can’t afford to buy. Every building had to be buzzard proofed. Repairs and resealing were necessary for most.

In December, when a volt of turkey vultures started to roost in the Australian pines along Marco Island Academy’s (MIA) eastern border, the students thought it was kind of neat. Then, when the buzzards began congregating on the flat roofs of their classrooms, the kids and staff at the school were puzzled, but not unduly alarmed. MIA is an environmentally conscious school, and the turkey vulture is protected by the federal Migratory Bird Treaty Act. Better to let them scamper and peck around up there until they get tired of it – except what was with all the scampering and pecking, anyhow? A few weeks later, after leaks in the roof started appearing, the conclusion was as inescapable as it was bizarre – the buzzards were eating the roof!

The cathartes aura, literally the golden purifier in Greek and Latin, was given its name and its federal protection for its willingness to clean up our great outdoors by feasting on animal carcasses and gobbling human garbage. Harming or killing them could put you at odds with the law. In recent years, with the advent of humans, new products have been introduced into their areas, which the gregarious birds seem to enjoy chewing on. The common denominator of this added cuisine is rubber, whether it be windshield wipers, car window caulking, shingles, or roofing. MIA got hit with a double whammy on this one. The most recorded rubber eating incidents of these environmental janitors are occurring in Southwestern Florida. And, most unfortunate for MIA, the roofs of their classrooms are covered by EDPM, a commonly used rubber roofing material. It had held up well prior to the buzzards taking their dates to dine there. The theories as to why the buzzards do this are varied, no buzzards ever having been interviewed. The most prevalent are that the lingering smell of insects on cars or roofs attract the buzzards, while the rubber, being of the same consistency as an animals skin, invites the buzzards to pick through it to get to the good stuff, which they believe to be inside. Some opine that it is just plain fun for the buzzards to do this, like chewing gum, making other buzzards anxious to join in. Few believe that the buzzards actually eat the rubber. They just want to get through it for a good meal. Whatever the reason, the result is the same.

When, after Christmas break it was discovered that water was dripping down from the ceiling tiles and ruining what was below, the affected teachers knew exactly what to do or more to the point, whom to call. Jane Watt is the only board chairman the school has ever had in its six years of existence. When it comes to threats to the school’s mission, she will drop everything to handle whatever needs attention. Watt was appalled when she saw what was happening. “We had to perform the repairs immediately to prevent damage to the 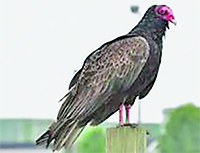 Submitted Photo |Turkey vulture, cathartes aura; Ornithologists must have liked this bird when they named it.

classrooms,” she said, “Prior to the repairs, when it rained, the water would come in through the ceiling tiles and damage the interior of the rooms.” There was nothing to do for it but to repair the damage right away, regardless of cost, and then make the roofs buzzard proof. The initial bid came in at $85K, Watt announced at a grim January 13 board meeting. Some of the bids were well up into six figures, she said. It was a big problem. There was no money readily available to pay for it. “To begin with,” says Watt, “MIA, as a charter school, receives 1/6th the amount of capital outlay funds (money to maintain the school) that traditional schools receive. For the past five years this has left us with an average gap of $525K between what we actually spend and what we receive from the state.” (I visit the school often and have seen no luxuries there.) Every year, that “missing” state money has to be raised from the generosity of private donors in the community. “Our board spends 90% of its time raising money, just to keep us running,” Watt said, “We would much prefer to spend the time on expanding the programs for our students.” For now though, that is wishful thinking, although Watt has recently taken her fight for equality to Tallahassee. (Too late for this edition, it will be reported in the next.) It is hard to even come up with a budget considering the large amount of imponderables, she says.

In the end, the board got the job done for $66K. As so often happens, the parents of an MIA student, in this case, Barry and Stephanie Riordan, have stepped up. “He [Riordan, the owner of Island Construction] donated his time and had one of his crews make the necessary repairs,” Watt said, “After making the repairs, he brought a team over to apply sealant and then another to bird proof the roofs. He saved us a significant amount of money.” How do you bird-proof a roof? Riordan did it by running 2 x 4’s along each edge and then running microfilament between them, high enough and close enough to prevent the birds from landing. “Our insurer wouldn’t cover this because the damage was caused by birds,” said Watt. “We still need to raise $25K to cover the cost of the repairs.” Already board members and a private donor are starting efforts to raise the money. “Otherwise,” says Watt, returning to a recurring theme, “we have to take the money from the classroom, and ultimately, the students cover the cost.”

If you would like to help the school with any of the cost for the repairs, your funds will be matched up to $25,000 thanks to a generous gift from one of the board members. Please send a tax-deductible check to Marco Island Academy at 2255 San Marco Road, Marco Island, FL 34145 and put “Roof repair match” in the memo section.