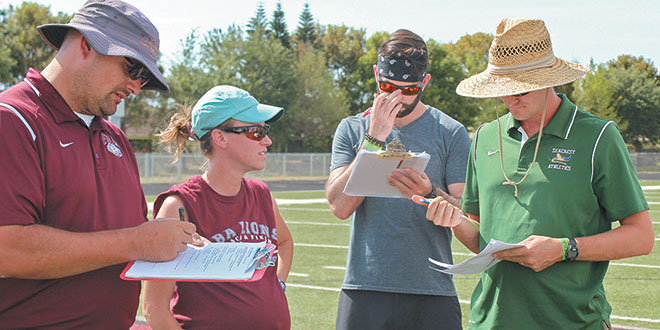 Mike Weyrauch adjusts his sunglasses during the coaches meeting. With him (from left): FBA’s Ryan Mitchell and Cassie Barone and Seacrest coach Nick Pohl.

An eight-member track and field team has little chance in a district meet, but the Marco Island Academy showed heart on April 21.

In just its second season and coach Mike Weyrauch in his first, the team gave an all-out effort.

“The team was impressive. Every single girl

came to every practice and got better. The boys and girls all improved and their times dropped dramatically,” Weyrauch said.

Sophomore Olivia Watt had the best showing with a fifth-place finish in the 1,600 meter run. Unfortunately only the top four advanced to regional competition.

The boys had just two entrants, Patrick Michel and Andrew Fowler. A third boy, Brian Flynn, was not eligible, as he didn’t compete in enough events while 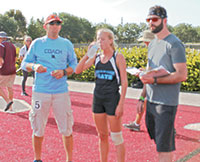 playing on the baseball team this spring.

MIA doesn’t have facilities where they can practice long and high jump, shot or discus. It resulted in them having no entries in field events.

Yet Weyrauch was enthusiastic for the future.

“One of the best things about them is that they came out every day with an open mind and killed it every day,” Weyrauch said.