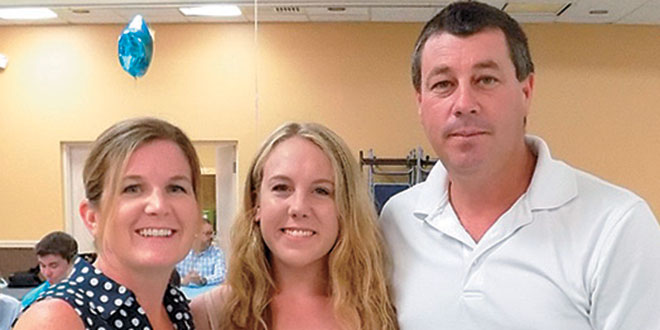 Jenny and Jay Cartwright with daughter Julia before induction ceremonies.

On Tuesday, May 10, 2016, Mackle Park was the scene of an impressive induction ceremony for Marco Island Academy (MIA) students, whose achievements and academic records had earned them a spot in the National Honor Society.

Established in 1921, the National Honor Society (NHS) is the nation’s premier organization established to recognize outstanding high school students. More than just an honor roll, NHS serves to recognize those students who have demonstrated excellence in the areas of scholarship, leadership, service and character. History teacher Lori Galiana and school counselor, Chris Zumstein are the faculty advisors for NHS. They planned the event and ensured that all students were qualified. To be a member of NHS you need a 3.9 weighted GPA and a minimum of 45 volunteer hours. Twenty-two new students were inducted, with 19 members from

previous years assisting with the ceremonies.

Paula Snow, assisted by Tiffany Matthews, were the parent volunteers who made sure everyone got fed prior to the induction. DaVinci’s once again donated the food, and of course once again, the City of Marco Island made their facilities available to MIA, which as yet, has no auditorium of its own. “This was by far the largest event we have hosted,” said Galiana, “Almost all of our NHS members and families were in attendance; nearly 100 people were there.” We are very appreciative of DaVinci’s for donating the food for the last two years and Mackle Park for being very accommodating. Our superstar parent volunteer is Paula Snow, who has spearheaded the actual dinner part, along with her assistant Tiffany Mathews (who is taking over next year).”

rolling, dropping some gems in her remarks. The actual induction ceremony was impressive, beginning with past members lighting the candles held by each of the new, followed by the NHS pledge. The inductees stood at the front of the room; past members stood to one side.

The motto of the NHS, Noblesse Oblige, is a French phrase literally meaning “nobility obliges.” It denotes the concept that nobility extends beyond mere entitlements and requires the person who holds such status to fulfill social responsibilities, particularly in leadership roles. It suggests that anyone who possesses special talents or gifts is required by society to make the best use of those gifts; that he or she is duty-bound to do his or her best. (Wikipedia/Merriam Webster). Thus charged, this group of MIA’s high achievers will soon go forth to make their mark in the world.