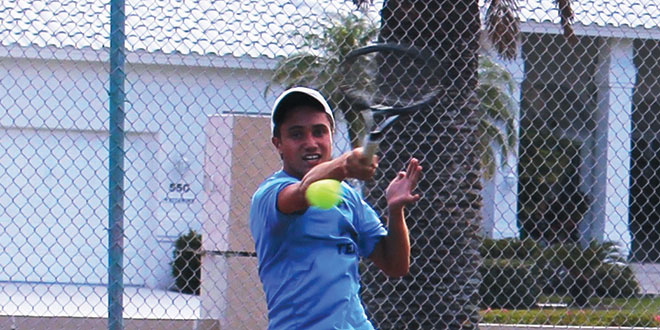 Photo by Roger LaLondoRaoul Rodriguez slams a forehand during a match this season. Named the school’s outstanding tennis player in the annualsports awards presentation, Rodriguez isthe first MIA player in any sport to reach the state finals.

“We have a tremendous group of student athletes,” Kelly Monnot, athletic director, said. “They are well-rounded students who work hard in the classroom and in athletics.”

Monnot thinks the school is headed in the right direction in academics and sports.

“The school student numbers are increasing and we are seeing more sports participation. We have many multi-sport athletes,” she said.

Monnot is proud of how the students are adapting to the school’s culture.

“We expect our athletes to excel in the classroom and in their sport,” Monnot said. “I am excited for what the future brings for MIA athletics.

Each sport gave three awards. In some instances a student won in more than one sport.

Below are the sports and the winners.