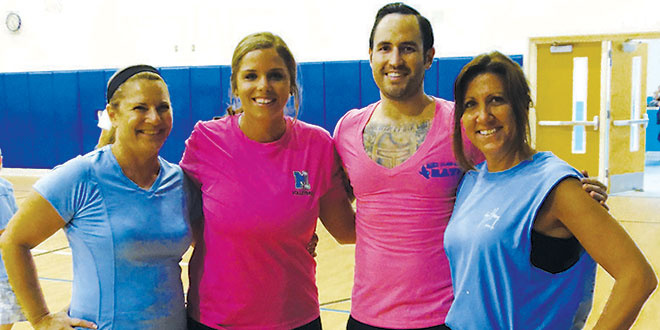 Boys and girls together on basketball teams – Half court shot 10 points – Principal hard-nosed referee – All for charity.

The Marco Island Academy faculty, staff and students teamed up for a charity basketball game on Feb. 26 in support of Golisano Children’s Hospital and its junior and senior prom events. The game, at the Marco Island Charter Middle School, raised nearly $600.

Faculty member David Horn organized the event. He runs a mentoring group for students, as each of the teachers at MIA have their own mentoring groups (kind of like homeroom). He tossed out an idea of a fund-raising basketball game, and it was well received.

Deneen Rose, MIA staff member takes the ball, literally, into her own hands and runs down the court to take a shot.

Scott donned her referee outfit, blowing her whistle for little or no reason.

The Black and Silver team won in the finals over the Blue and Black team. 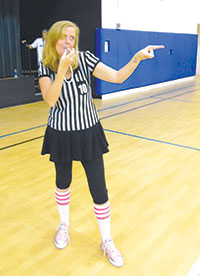 Marco Island Academy Principal Melissa Scott casts a wary eye as she blows her whistle for a foul. She made up the rules as she went along in the basketball fundraising. The event raised nearly $600 for Golisano Children’s Hospital and the school’s junior and senior proms. Photos by roger lalonde

As the games went on the half-court attempts became a focal point, but many more were missed than made.

Mom Deneen Rose met her match trying to guard her daughter Gianna. Laughter followed a play where Deneen just picked up the ball and ran half the court, but missed the shot. Bon Deese put on a show if he made a basket and Preston Reese showed his leaping skills with two dunks.