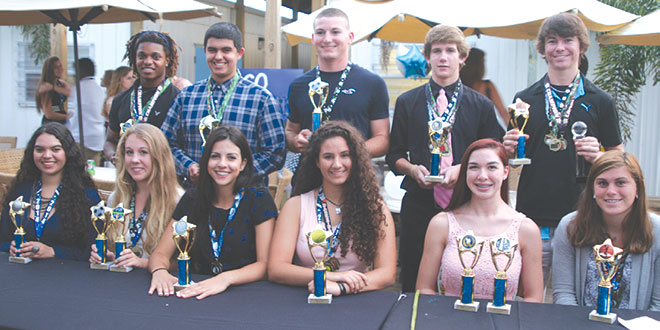 As Marco Island Academy completes its third year, the grades are good for its sports program. The year marked the first time teams were eligible to earn Class 2A-District 10 appearances, and MIA’s student-athletes delivered.

Roger Raymond, MIA athletic director, is a cheerleader for all the programs. The three-year-old school had its first senior class this year.

“In every sport, we have a number of athletes returning, and many will be juniors and seniors,” he said. “It is very difficult to compete against teams that have quality seniors with more experience. For many of our athletes, they will be in their third year playing for the school, and it will show.”

On Tuesday night sports successes were celebrated at the Third Annual Student Athlete Awards Night. Cole Stretton, a four-sport athlete, was named the top athlete for basketball and football. He made the All-Area Basketball First Team, along with being the leader in scoring and steals for Lee and Collier counties. He also was named All-Area in football and a leader in baseball and cross country.

“We aren’t up there yet, with foes like First Baptist, St. John Neumann and Community School, but we will have some juniors and seniors on the team that can help some of our younger players coming in,” Raymond said.

The boys basketball team had everyone back after having its first winning season at 13-12. “We were fortunate enough to win a district title then host a regional game before losing to Southwest Florida Christian,” Raymond said. “We still will have 5A and 6A teams we’ll play, like Palmetto Ridge, Immokalee and East Lee County, and those games will help us build toward tournament play.”

Kiera Ludwigsen was recognized as the top student-athlete for cross country and cheerleading. “Kiera was outstanding, and next year, we will have boys and girls teams led by coach Bruce Kretschmer,” Raymond said. He expects the cross country team will be helped by some good incoming freshman. Brian Flynn took the honor for the boys in cross country.

In volleyball, Romina Giminez led the 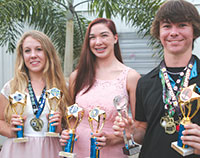 team to a second-place finish in the district, before losing to eventual state champion Seacrest Country Day in regional play.

“Coach Kelly Monnot has done a great job in making our volleyball team very competitive,” Raymond said. Added to the mix next season will be games with Lely High and Palmetto Ridge.

Dunsehka Cruz led the coed golf team. Next season, the program expands to boys and girls teams with Scott Dehooghe at the helm. “Scott has done a masterful job and with added talent will take the teams to the next step,” Raymond said.

“We’ll have Julia back and some new faces to help improve the soccer team that Jim Watt and Katie Oakley will coach,” Raymond said. “The boys team, under Dan Sweeney, will also have key players like McMullen returning.”

Victoria Vale was named the top student-athlete for the girls basketball team. Coach Tim Tudor did a good job with the team, but lack of numbers took its toll over a season. Vale and Jessica Ragan return next year, and Raymond sees Sarah Colburn making a difference with her height and incoming freshman Gianna Rose having an impact.

Andy Delgado Jr. was named the best in baseball and will return for next season. Coaches Andy Delgado and Chris Liebhart will have everyone back from a team that finished second in the district.

The tennis program will have boys and girls teams under the direction of Jerra Minning, who also coaches the Marco Island Charter Middle School coed team. Community School is the cream of the crop in tennis. Katherine Felipe earned the honors as top student-athlete for the girls and Raul Rodriguez for the boys.

“(Raul Rodriguez) went up against top competition playing No. 1 for the boys,” Raymond said. “Raul can play against anyone.”

The newest sport will be swimming, with the YMCA’s Kamal Farhat leading the way. “(Incoming freshman) Susan Faremouth will be one of the team leaders,” Raymond said. “They may be low in numbers, but Kamal has shown that he is an outstanding coach.”

When MIA opened three years ago there were 62 students. Next school year, it expects to be at its limit of 210, Raymond said. The freshman class is full.

“Academics come first, and with those numbers, we should have more student-athletes,” he predicted.