MIA Senior Shoots for the Stars Grandparents Get Him Started 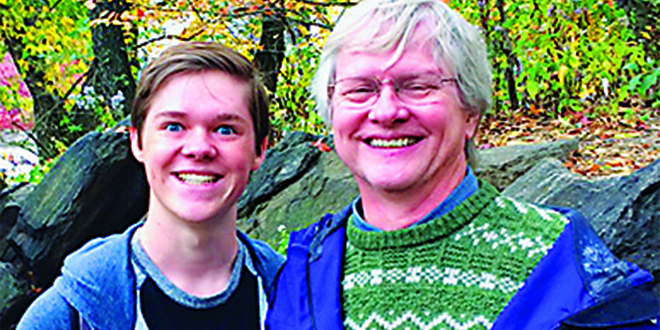 Dylan and Papa Clark at Central Park during a visit to Columbia University last fall. These two explored the world of astrophysics together as Dylan was growing up.

Dylan Demkovich will be going to Brown University this year. Founded in 1764, this Ivy League school, of 6,200 undergraduates, is located in Providence, Rhode Island and is the seventh oldest college in the U.S. With a weighted GPA of 4.95 (out of 4.00) at Marco Island Academy (MIA), Dylan scored an early acceptance to Brown and withdrew all other collegiate applications. He will be majoring in astrophysics, which he describes (accurately as it turns out) as the study of “How the universe works and the philosophical implications of [how our vicinity works] when compared to the rest of the universe.” That’s a mouthful for most teenagers, but Dylan has been thinking and dreaming of this stuff for as long as he can remember. Math is Dylan’s favorite subject, but he is quick to point out that math and astrophysics go hand in hand. “Math is the basis for physics. Physics is the basis for chemistry. And chemistry is the basis for biology,” he says without taking a breath. Then looking me straight in the eye, Dylan declares, “Force equals mass times acceleration.” These are obviously sublime words to live by for Dylan. He says he got them from Isaac Newton.

So, Dylan’s favorite class must have been one of his math or physics classes. Wrong. It was Lori Galiana’s Global Perspectives class (Dylan took it twice, the second time at AICE college level), which changed how he looked at things and influenced (whether he knows it or not) his choice of colleges. Mrs. Galiana is an award-winning history teacher at MIA (See “Galiana Shines at MIA”, Coastal Breeze News 6/28/16). “More than anything, she helped us to learn how to properly question, compare, and reference sources in any kind of debate [or discussion],” Dylan said, “These kinds of skills are absolutely necessary in college.” His two research papers (Artificial Intelligence and Government Funded Space Programs) taught him that we were in no danger from robots, nor was it necessary for government to fund space programs. “It would really be cool to work for Elon Musk,” he adds. His research showed him that there was much more then physics going on in 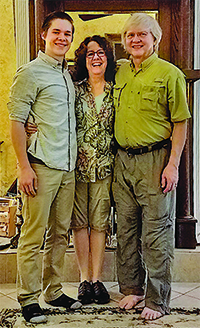 Photo by David Clark | Dylan, Papa Clark and Nana Woliver, in a recent selfie. While Clark nurtured Dylan’s interest in science, grandmother, Sally Woliver, made sure that Dylan had the educational opportunities needed to accomplish his goals.

the world. He said that Brown was the only college that he visited which allowed him to pick his own courses outside his major. There’s a lot of other stuff he wants to learn which will help his applications of physics to problems he will encounter.

David Clark and Sally Woliver are Dylan’s paternal grandparents. He has lived with them in Golden Gate Estates since the age of 6, and they have pretty much cared for him since birth. Dylan’s biological parents were college age at his birth and were grateful when the Clarks offered to care for Dylan. David Clark is a professorial self-taught computer engineer, with a degree in English literature, and a career which includes, broadcast engineering, recording, network security, and herbalist. Sally runs her own non-profit management consulting firm and has a graduate degree in this field. They are a lively energetic couple with a lot of interests. David likes to think that he first got Dylan interested in physics, when, at the age of 9 months, he put a book on Einstein’s Theory of Relativity into Dylan’s hands and then took a picture of it for posterity. “You never know,” Dylan told him later, “maybe you were on to something.”

From a young age, Dylan was always drawn to math, but it was a Boy Scout camping trip that convinced his parents that Dylan’s inquisitive mind had turned in an additional direction. “He came home from the camping trip, raving about the stars,” David recalls, “He said he had lain there on his back, long after the others were asleep and just gazed at the stars, wondering what was going on out there.” After this trip and an interstellar movie (title unrecalled) Dylan told his parents he wanted to become an astronaut. David installed a Mars Rover simulator on Dylan’s laptop, which enabled Dylan to change trajectories and otherwise control the Rover as it landed on Mars. His interest in physics started to develop in the 7th grade, and was encouraged by his grandparents. “They provided a steady stream of reading material, trips to planetariums in Chicago and New York, and endless support,” Dylan said, “Physics was a natural progression 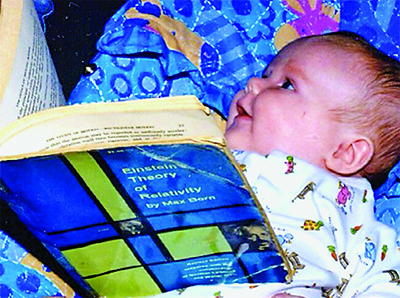 of my love for space.”

Sally Woliver owns a 22-year-old consulting firm, Sally M. Woliver and Associates, which assists nonprofit corporations in obtaining funding. She had done work for both MIA and the Marco Island Charter Middle School (MICMS) and was impressed by both. She felt MIA with its core STEM (Science, Technology, Engineering and Math) curriculum and its college level AICE (Advanced International Certificate of Education) was the best school in the area to prepare Dylan to get into a top university. The school which would best prepare him for MIA would be MICMS. “It was fortunate that two such schools existed in Dylan’s school district,” Sally said, “For Dylan’s purposes, I felt that they were probably tops in the state.” And so, once Dylan had settled on an area of study, Sally lost no time in enrolling him at MICMS in 2012, and at MIA in 2013.

Dylan feels that MIA has been the perfect fit for him – for a lot of reasons. For one, he liked the small size of the school. “It makes a huge difference, being able to talk with teachers on a personal level,” he says. He really liked the AICE program offered at the school because “it focuses a lot on critical thinking rather than rote memorization of a bunch of facts.” The AICE program is written and administered by Cambridge University in England. Time has recognized Cambridge as the as the fourth most prestigious university in the world. According to a prospectus, AICE was designed to give students the option to pursue a more rigorous and ambitious curriculum by teaching key skills to succeed in college-level work. Dylan would certainly agree with this. At the end of his junior year, he passed his final AICE exam, and received his diploma “with merit,” a diploma which is given great weight by prospective colleges.

Last year, Dylan was appointed to the Student Leadership Team, a group of students recommended by their teachers to plan and participate in fundraising and school events like homecoming and prom.

Perhaps the accomplishment he is most proud of is the founding of the STEM Masters program and later, the STEM Club. After his freshman year, 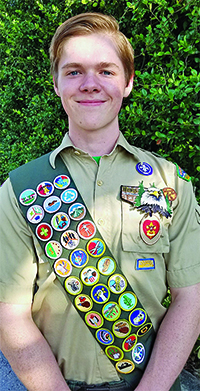 he was sold on the STEM curriculum and wanted to make it more effective and prominent. He started the STEM Masters program for the purpose of “bringing in professionals in the areas of science, technology, engineering, and math, to talk about their college experience and careers.” He has brought in over a dozen speakers, including graduates of MIT, Brown, and Princeton, FGCU professors, and experts from The Conservancy of Southwest Florida, among others. He credits the MIA administration, notably Assistant Principal Amber Richardson, for their constant guidance and support. Then in his junior year, noticing that the same group of students kept showing up at the STEM Masters activities, he started the STEM Club to give STEM oriented students a forum to meet and discuss ways to further advance the STEM curriculum. Starting with 10 or 12 students, the club has grown to a couple dozen today. They meet every Tuesday during lunch. Dylan had big plans for the STEM Club, including entering competitions and a trip to the Kennedy Space Center, but the competing demands of scouting (He became an Eagle Scout in September. Only 4% of scouts ever attain this), his volunteer work at the Naples Zoo, and “applying for, getting into, and paying for college” ultimately left him little time to pursue these ambitions goals.

Dylan may feel that there was work left on the table at MIA, but the faculty and staff sure enjoyed having him there for four years. History teacher Lori Galiana (whose courses Dylan took at every opportunity) was particularly impressed, finding Dylan to be an extremely bright student, as well as passionate, driven, and principled. “I believe he is capable of achieving great things,” Galiana notes, “I love to challenge him to see where I can push him and make him want more.” They developed a close relationship, each feeding off the other.

No one takes more pride in the students’ accomplishments than Principal Melissa Scott, who says that Dylan is one of the finest young men she has ever met. “He is a champion of MIA,” she says, “and has never taken for granted the opportunities here. He has truly made his dreams come true, and I can’t wait to see him fly.”