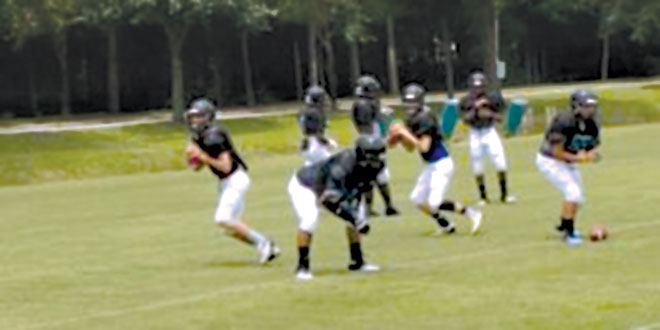 Back in the spring junior Cole Stretton, outstanding in basketball and football, predicted that the football team will be the talk of the school this year.

That was after the basketball team won its first district basketball title and the football team had recorded one win last season against some very tough foes.

This is a new season, and new head coach Greg Fowler is impressed by the work ethic of the team. Fowler and his staff have worked with the players on a new option-based offense and 3-5 defense.

“The kids are picking up the new systems well, and their effort in the weight room will be evident this fall,” Fowler said.

The Rays went to their first football camp at the University of Jacksonville this summer.

“We spent three days at Jacksonville University, competing with schools larger than us, and I was impressed with the players’ ability to execute the offense and defense,” Fowler said.

He expects Stretton to again have a major impact, expanding his role on offense as quarterback and receiver. “Cole has been competing for the starting quarterback position, while also taking reps at receiver on offense,” Fowler said. “His athleticism will be helpful on both sides of the ball.”

Fowler also has high expectations for his quartet of running backs that include Cayden Couture, Tyler Gresham, Fritz Larose and Patrick Michel.

“Our offensive line is a much improved group of young men who should open some good running lanes for our talented group of backs,” Fowler said.

Defensively, the Rays have implemented the 3-5 scheme. 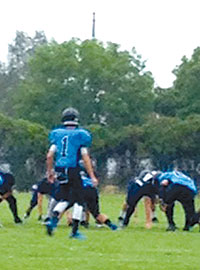 Cole Stretton (1) lined up for a big MIA play on defense last year.

“I believe the 3-5 will allow us to utilize our skill players and limit the number of linemen playing both ways,” Fowler said.

The D-line will be anchored by seniors Irving Cerventes and Preston Reese. Behind them is a skilled group of linebackers with the 6-foot-2, 220-pound sophomore Gresham patrolling the middle. The secondary will be led by corners Tyler Wallace and Brian Flynn.

Gresham was all-everything in Marco Island Charter Middle School sports in 2012-2013. He transferred to Marco Academy after a year at Lely High School. Michel, a speedy back who sat out all but one game last season due to surgery, is ready to go. He too was an outstanding athlete at Charter Middle with Gresham.

The Manta Rays will be up against a rugged schedule with games against 2A-District 6 opponents St. John Neumann, First Baptist Academy, Moore Haven and Evangelical Christian Academy.

The team opens at Highhlands Christian at Pompano Beach with a 7 PM game on Aug. 29. Its first home game will be hosting Somerset Academy of Homestead at 7 PM on Sept. 5 at Winterberry Park.