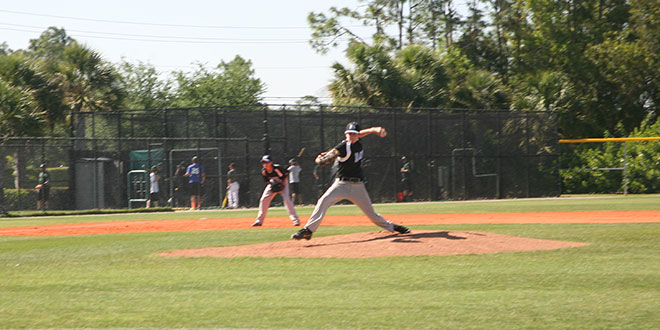 The Manta Rays faced off against the 1-16 Everglades City Gators in Class 2A-District 10. It too was the first playoff game for the Gators in its 23 years of baseball. During the season the Rays had beaten the Gators three times — twice by the 10-run mercy rule.

But not on Tuesday.

While the Rays couldn’t seem to get going, the Gators rolled to an 8-1 lead by the fifth inning. MIA rallied for three runs in the sixth inning, but had dug itself a big hole it couldn’t overcome.

The 10-11 Manta Rays didn’t seem up for the game. They expected

to be playing for the district championship against Seacrest Country Day on Thursday. Rays coach Andy Delgado and his team were left shaking their heads after the game.

“We beat them three times — two by the 10-run rule — and then we play our poorest in an important district playoff game,” he said. “We had no offense; we made errors, and today, (the Gators) played a strong game.”

Gators coach Becky Welch actually credited the district basketball playoffs to creating a stronger mind set for her team. Many team members got their first playoff experience in losing to MIA during the basketball playoffs, where Cole Stretton led the Rays to victory.

“I think one of the differences in the game was that many of the kids gained great experience in competing in the basketball playoffs,” she 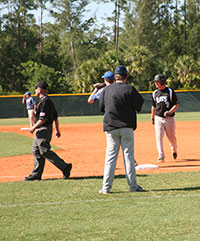 Marco Academy’s Marcus Seidman returns to first base after lining out a hit in the first inning in the Manta Rays 8-4 loss to Everglades City on Tuesday in Class 2A-District 10 play.

said. “They learned what post season play was all about.”

MIA took its only lead in the second inning when Stretton beat out an infield hit, sliding head-first into first base. He stole second, and Andrew Delgado lined a base hit to give the Rays a 1-0 lead.

Defensively, left fielder Austin Gross bailed the Rays out of a potential disaster in catching a line drive and doubling off the Everglades runner at second base to end a Gators rally in the third inning.

In the fourth inning, Gators pitcher Tyler Pasiuk took a full swing that only went a few feet. Rays pitcher Brian Flynn threw wildly to first base, and Pasiuk went all the way to third. He scored on a Dalton Patt base hit. Another wild pitch saw Patt take two bases, stopping at 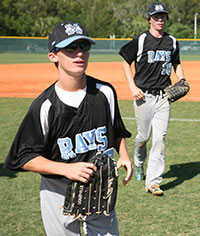 Manta Rays Austin Gross (sunglasses) shows a slight smile after making a line drive catch in left field and doubling off the Everglades City runner going back to second which closed out a potential Gators rally in the third inning in Class 2A-District 10 play on Tuesday. Behind him is Cole Stretton, who recorded two hits and scored two runs in the team’s 8-4 loss.

third. And another wild pitch scored Patt, giving the Gators the lead they never relinquished.

Delgado has a team of freshman and sophomores, giving him a positive look to next season. “This was a very tough loss, but I think it will help us grow as a team,” he said.

The Gators will play top seed Seacrest at 4 p.m. on Thursday at Seacrest. Seacrest coach Mark Musala said, “Coach Welch does a great job, and she knows what it takes to win. We barely beat them, 7-6, this season. We are really looking forward to a great challenge.”

However, Seacrest beat the Gators by the 10-run rule earlier this season.

After covering area sports and community news for 15 years for Scripps newspapers, Roger LaLonde is now a contributor to Coastal Breeze News. He is also a licensed real estate agent with Premiere Plus Realty.