MIA Principal Turns a School Into a Family 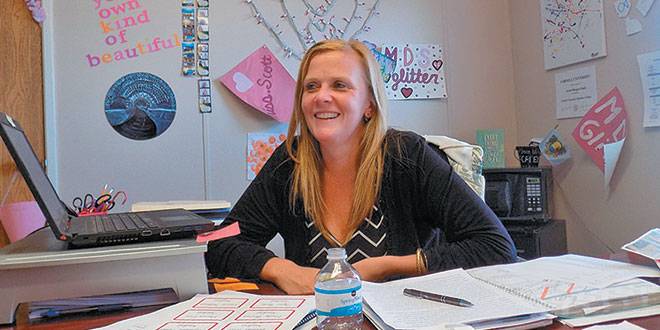 Principal Scott in her office at MIA, her door is rarely closed; Walk into the administration building and she is the first staff member you will see. (Right) Principal Scott and three of her teachers (recommended by her) received the prestigious Shine Award from Governor Scott during his recent visit.

On Friday, March 4, 2016, during a visit to Marco Island Academy (MIA), Governor Rick Scott presented Principal Melissa Scott with the coveted Governor’s Shine Award, given to outstanding educators who have been nominated by their peers. Governor Scott had found out what many already knew. Marco Island Academy had finally found the principal they were looking for. It had not been easy.

After a titanic battle to obtain Collier County School Board approval and secure a building and campus, Marco Island Academy finally opened for business in August 2011. It very nearly closed up shop a few months later. Jane Watt recounts the struggles in her book, “Fighting for Kids.”

In the spring of 2011 MIA had hired its first principal. He lasted only until November 2011 and left a lot of wreckage in his wake. During the summer of 2011, teachers were not being hired, equipment, textbooks, and office supplies were not being ordered. The principal spent a lot of his time closed in his office. MIA gradually slipped into a state of anarchy, and then chaos. “There was no discipline and no leadership, whatsoever,” recalled Watt, “The hallways were filled with multiple students wearing head phones.” It seemed more like a community center than a school, one staffer observed. The situation abruptly came to a head when Watt got a call from the respected school resource officer, a member of the Marco Island Police Department. “He told me that the school was no longer safe for the students,” Watt said, “He said he saw a fight break out at lunch and was pretty sure why the bad behavior was escalating. ‘You’re a nice person Jane, and I know how hard you have worked. I hate to be the one to tell you, but this situation needs to be addressed immediately,’ the officer warned.”

In November 2011, within 24 hours of Watt’s conversation with the police officer, the board held an emergency meeting to determine the school’s future and deliver an ultimatum to the principal. Ultimately, the principal’s resignation was accepted by the board. George Andreozzi, an experienced educational leader from New York, was hired as an interim principal. “We made him aware of the deplorable situation at the school and let him know that we were looking for someone to turn the school around,” recalls Watt. By all accounts George Andreozzi did succeed in imposing 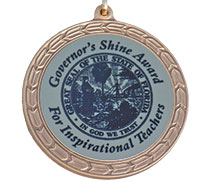 a new culture and positively impacting MIA. Eventually he was given the permanent title of principal.

Things continued on a fairly even keel when, in July 2013, Melissa Scott walked in the door. She was looking for work and had an impressive resume. In 1998 Scott had graduated from the State University of New York – Geneseo, New York, with a degree in English and secondary education. Following a one-year public relations and scheduling assignment on Congressman Bill Paxton’s staff, Scott was hired as an English teacher in the Robert E. Lee High School (over 2,000 students) in Springfield, Virginia. From 1999 to 2013, she also served as athletic director and student government advisor. She was chosen as Teacher of the Year four times. While there Scott also managed to earn a master’s degree in educational leadership at George Mason University. In the summer of 2013, Scott tendered her resignation and moved to Marco Island. “I loved teaching at R.E. Lee High School” Scott said, “But for various reasons, I wanted to be near my parents on Marco Island.” Scott had no job or job prospects lined up here. She just packed her bags and came on down. Shortly after her arrival she began looking. “I heard there might be a reading position opening at MIA” Scott recalls, “Before I knew it, I was called in for an interview.”

“The school did not have any job openings at this time,” said Watt, “Mr. Andreozzi and I agreed to interview her anyway. Ms. Scott had come highly recommended by people whom I highly respected. We had no particular position in mind for her, but within a few minutes of meeting her, I realized that we had found someone truly extraordinary. Despite having no money for an additional teacher, we simply had to add her to the staff.” Scott accepted the position of half-time reading teacher and half-time director of development for the 2013-2014 school year. She accepted a reduced salary and was willing to help wherever the school needed her. Within a few months of working around the clock, weekends and evenings included, she was promoted to Assistant Principal.

In the next three months, Scott took the lead in securing academic accreditation for the school. It was a big job. The MIA board must have been impressed because a month later, after reviewing 103 resumes, and interviewing the top three candidates, the board unanimously selected Scott to be third 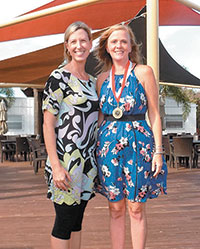 principal of Marco Island Academy. Andreozzi’s health had been faltering and he was hinting at retirement after the school year. He was unable to return immediately after the winter break. “His absence made it difficult for the school to maintain stability”, Watt said, “Discipline was inconsistent and the students were beginning to take advantage of this.” Andreozzi resigned and Scott was installed as principal in March 2014. MIA has never been the same.

In the two years before Scott became principal, MIA had received a “C” and then a “D” rating from the Florida Department of Education. Then, following Scott’s elevation, the ratings dramatically improved to an elite “A” designation, where it has stayed. Enrollment has risen from 68 in 2011 to 235 today. Morale has drastically improved among staff and students. Scott has also done much to foster good will in the community. Last year, she was selected to participate in Leadership Marco, a three-month course of instruction for community leaders covering all aspects of what makes Marco Island tick. Scott was selected by her Leadership Marco class as co-chair to lead the incoming class this year.

Perhaps Scott’s most enduring legacy will be the high regard and love, which her students and staff have for her. Board Chair Jane Watt is especially effusive in her praise. Watt feels that Scott is the heart and soul of the school with her most amazing quality – her love for the students. “Prior to each school year, she meets with every single new student and parent to discuss their goals. She uses this information to help each student reach their highest potential. Her passion, drive, enthusiasm and energy are contagious at our school. She makes herself available to students when they need it the most. Ms. Scott has redefined what it means to be a principal. There are no words to describe how thankful we are to have her as the principal of our school.”

But what do the students say? Through my reporting, I have gotten to know a quite a few of them. They kept returning to such words as considerate, caring, compassionate, loving, gregarious, creative, joyful, positive, funny, spontaneous, like a mother, and happy. Duneshka Cruz, a graduating senior who has been through both the bad and the good, took the time to put her thoughts to paper. Her tribute to Principal Scott is both eloquent and moving. I can do no better than to close

No bells at MIA – the P.A. system plays contemporary rock when it’s time for students to change classes, and ceases when the next class begins. Submitted Photo

Having Miss Scott as a principal has been one of the best parts of attending Marco Island Academy. She has most definitely made the school environment a special place, along with the rest of the administration. Miss Scott has such a passion for education and a love for students that cannot be matched. You will always see her around campus with an enormous smile on her face. She is exceedingly dedicated to the school and each student in it. She is not only a great principal, but a great mentor. She drives you to accomplish goals you didn’t even know were possible. She also always has an ear to listen and comfort any student who might be going through a difficult time whether it be personal or school related. Alongside the noteworthy moments, Miss Scott knows when to get her A-game on. You are either excited to step into her office or nervous because you know it’s time for a serious talk (you will always know when that time is).

Every senior’s last year of high school is the wildest. There are the college applications, scholarships, testing, and so on. Miss Scott always finds a way to remind you to take a breather and remember that whatever happens, happens. As I wait to hear back from three more universities, I can’t help but express my anxiousness to Miss Scott. What she told me really opened my eyes to the whole college process. She put both of her hands on my shoulders, looked me in the eyes, and said, “You must remember that you are not lucky to have those colleges, they are lucky to have you. It’s never the other way around.” It warmed my heart to hear her say those words.

Miss Scott has truly made an impact in my life. Now that that I will miss all my high school memories with such an incredible, brilliant, genuine principal. I will miss the drives with her as she took some students to volunteer opportunities. I will miss her being a champion in our spirit weeks. I will miss her inviting me to her office just for a chat. I could go on and on about all the moments with Miss Scott that I will cherish forever. Since she became principal, she has made my last two years of high school, ones I will never forget. I am sure most of the student body feels this way, as well.