MIA not a pushover in loss to Seahwaks 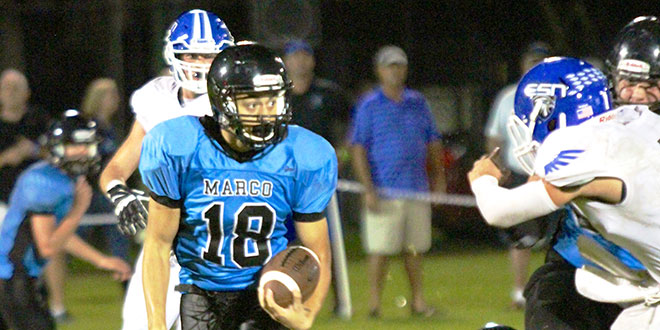 While the Community School coaches told their players after the game that they never doubted the team would win, it wasn’t easy.

The Seahawks won their third straight game, but Marco Island Academy showed they can compete with the better area teams.

The Manta Rays are 2-1 on the season at the start of its third season. They travel to Moorehaven on Friday for an important Class 2A district game that has playoff implications.

The game-changing play was not made by the players, but the referees in the third quarter.

Trailing 14-10, an avalanche of Manta Rays defensive players chased Seahawks quarterback Flagg backwards 15 yards. As he was going down it appeared he flipped the football over his shoulder.

Two penalty flags flew for intentional grounding that would have cost the down and a penalty.

Instead, after a very brief discussion, both flags were picked up. The referees decided 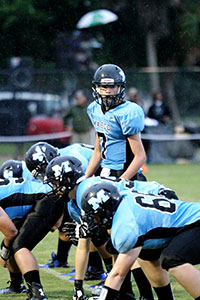 that the play was an incomplete pass.

It gave the Seahawks new life. They went down the field for a score and extra point, giving them a 21-10 lead and the momentum for the rest of the game.
Playing at home, the Manta Rays gave CSN a rugged reception. The Manta Rays took the opening series 70 yards with Tyler Gresham finishing off the drive on a three-yard run. Anton Mertens kicked the extra point, giving the Rays a 7-0 lead just three minutes into the contest.

Greg Fowler, Manta Rays coach, went for first downs on fourth down players rather than punting in the first half, winning out three times. He admitted that CSN’s punt returners were dangerous.

He was right. On the Manta Rays first punt to the CSN 18, it was run back to the Manta Rays 18. A 53-yard return that set up a one-yard TD run for Joe Lang. It tied the game at 7 with 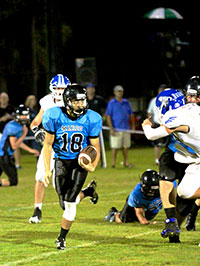 The Rays Cole Stretton took the kickoff from his 14 to MIA’s 44. With less than two minutes in the half Rays quarterback Andrew Fowler made good on two pass plays. It put Mertens in position for a 26-yard field goal ending the half with the Rays holding a 10-7 lead.

While the Seahawks coaches weren’t worried, some fans were. Two CSN fans exchanged comments at half time. One fan said the team would take over in the second half, but the other said “you better keep your fingers crossed.”

The Seahawks took just two minutes to open the third quarter with Ford scoring his first of two touchdowns. George Schmelzle also crossed the goal and Cory Hixson made good on a 38-yard field goal.

“I thought we took it to them early,” Fowler said. “Our kids went out there to win.”

After the game the Seahawks celebrated as the Rays looked on. The young Ray’s competitiveness showed that one day it will be them celebrating a victory over a major opponent.