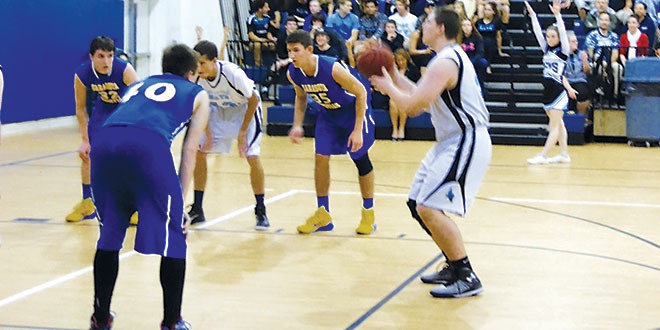 Marco Academy’s Kyle Ginther sizes up a foul shot in the team’s loss to Sarasota Christian. photos by roger lalonde

The Marco Island Manta Rays, undersized and undermanned, did what they have done all season in the Class 2A regional quarterfinal game against Sarasota Christian on Feb. 12.

The Rays played with valor against all odds and stayed in the game early against a team that had many weapons, losing 80-52.

The Rays ended with a best-ever record of 16-7, winning its Class 2A-District 10 championship for the second straight time. Pretty good after just four seasons.

Coach Roger Raymond used a four-corners offense to slow down the game and it worked early. In fact, two missed layups and two missed foul shots might have given the Rays early edge. Theirs first basket didn’t come until 3:57 left in the first quarter, yet they only trailed 5-2. The first quarter ended 11-7, in the Blazers favor. 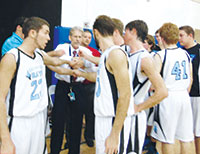 Marco Island Academy’s Peter Servente has his eye on the score clock as coach Roger Raymond ends a timeout discussion. Time ran out for Servente and his team as SarasotaChristian defeated them.

Stretton left the game after a hard foul with a knee injury, the team battled. It was 15-15 three minutes later then the Blazers took over, taking a 32-17 lead into locker room at half time.

Stretton, a junior, returned to the game and finished with 13 points, seven assists and five steals, though he was hounded by two defenders much of the game. The four-corners offense slowed the game, but also meant the usually aggressive Rays offense was slowed too. Stretton only had 12 shots in the game.

In the second half the Blazers had figured out the Rays four-corners offense and turned many plays into steals for easy baskets. But the Rays kept battling though 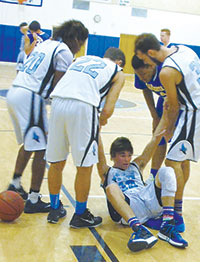 Marco Island Academy’s Cole Stretton is helped up by teammates after taking a hard foul.

the score was going in the wrong direction. What seriously hurt them was that the Rays missed 16 free throws.

Patrick Michel, a junior, 5-foot-8 forward, showed no fear, going against the much taller Blazers on the boards. He grabbed six rebounds, caused a number of turnovers and drew charging fouls that gave the ball back to the Rays.

“Patrick gets all the hustle plays,” Raymond said.

We played a quality basketball team, Raymond said after the game. “I guarantee we got their attention. Their coach acknowledged we played them tough to the end. There is no shame in the loss, I couldn’t be prouder.”

Raymond thanked Servente and Reese for being there in the good and bad times.

“From Day 1, when we started four years ago, you played through some devastating losses and you stuck with it,” Raymond said.

Stretton, Servente and Reese led the team over the last two years in winning 28 of 48 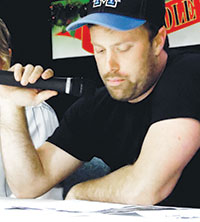 MIA’s Chris Liebhart looks at list as he announces the players in the regional quarterfinal basketball game between MIA and Sarasota Christian, won by the Blazers. Liebhart now begins his first season ashead MIA baseball coach.

games. Most of the losses each year came from playing bigger schools, like Palmetto Ridge, Immokalee and Fort Myers-Canterbury.

Servente set the school single-game scoring record with 38 points, while setting another school record by making seven 3-point shots in a game.

Reese was the county’s top rebounder last season and third this year.

“He has played every year against taller, talented players, but more than held his own, in rebounding,” Raymond said. “At 6-2 he can jump out of the gym.”

Reese looked back on his playing years.

“It taught me a lot, there were a lot of life lessons,” he said. “The first season we had five kids and we were going nowhere and look where we are now.”

As the seasons went by he found his role changing.

“In my freshman year I was a star,” he said. “As we got better I found my role more as a rebounder, setting up the team. I will 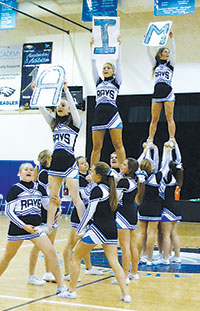 Marco Island Academy cheerleaders presenta routine during the Class 3A regional game between Marco Island and SarasotaChristian on Feb. 12.

miss the fans, being on the court, I will miss it all.”

Servente talked about his four years with team.

“We started with five kids almost every game and now we have become a more dominant team,” he said. “We transformed over four years as our confidence grew. We got more players that could play their A game.”

Servente thought about playing basketball in college, but chose not to when accepted to the University of Central Florida.

“That was my goal to be accepted at UCF and when I got the acceptance letter I knew this season was my last,” he said. “I am excited to move on.”

Next season the team moves up to 3A, which puts powerhouse First Baptist Academy, St. John Neumann and Community School on their calendar.

In speaking of moving up to 3A, the always competitive Raymond said, “I guarantee we will get their face.”