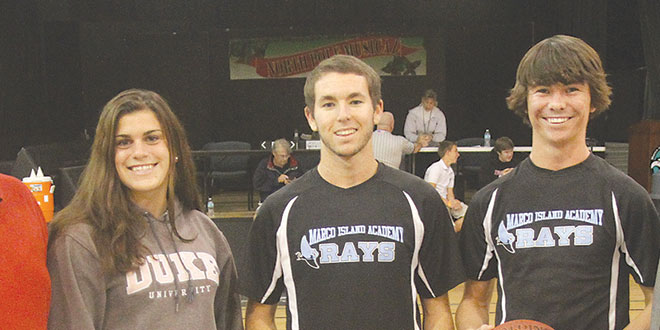 Three Marco Island Academy and three Lely High School basketball players have been named “Player of the Week” by the National Scouting Report.

Scott Hills, NSR director of scouting for Southwest Florida, began the award in the fall for football and volleyball. He provides the plaques and certificates after coaches from Southwest Florida provide the nominees.

“I have continued the awards for basketball, and since everyone has enjoyed the acknowledgement, I will continue for softball and baseball,” he said. “We do it for the kids, for the accolades they deserve for being the top athlete in their given sport for that week.”

school history. In the two key games leading up to its tie, Vale averaged 33 points a game.

Servente and Stretton have been the dynamite to the explosive Manta Rays on their way to a second straight regular season district title. Servente scored 32 points, including a school record seven three-point shots in a critical win over Seacrest Country Day School, who at the time was tied for first in the district.