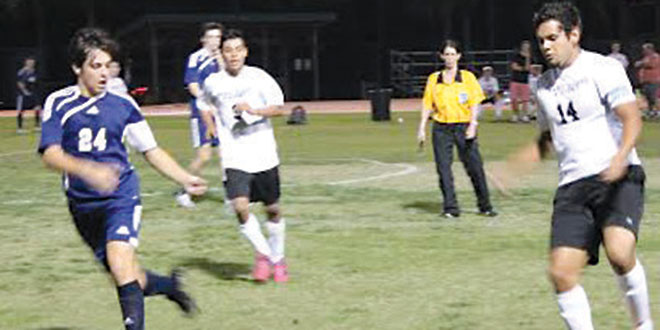 The MIA boys’ soccer team ended the regular season with losses against Seacrest and Gateway Charter. On January 6, at Winterberry Park, after giving up two goals, Omar Rodriguez scored on a free kick, followed with a goal by Collin McMullen (assist – Logan Cross). The Seacrest defense stopped the Rays the rest of the way. Final score Rays 2, Seacrest, 4. At Gateway on January 7, the Rays took a shellacking, on the short end of a 2 to 10 score. Jordan Barrett scored on a free kick and Collen McMullen did some fancy dribbling through the Gateway defenders to score on a chip shot from thirty yards out. The January 8 game at Oasis High School was cancelled. Final record this year was 3-13-1.

Coming off his first regular season as coach, Jerry Miller is quick to express his appreciation for the consistent competitiveness of this team. “This group was very resilient, always bouncing back after each game,” said Coach Miller, “They learned from every experience.” Miller felt that the unit playing well together enabled individuals to have standout seasons. Miller notes that Juan David Patino had a great freshmen season. “I am certain that he will be a great leader for MIA soccer moving forward,” said Miller, “Our Senior Captains Cam Ragan, Omar Rodriguez, Jordan Barrett, and Collin McMullen all did a great job on the field and their talents will be missed next season. Cameron Olgin had an outstanding season in the net.”

Miller looks back on his first year coaching as a positive experience. “I appreciate the opportunity to work with such a great group of athletes,” said Miller. “We are looking forward to the future of the program, continuing to build off of the success from this season.” Athletic Director Kelly Monnot is also pleased with the results achieved this year. “Coach Miller has done a great job establishing the expectations, and the senior class has done a great job leading the team,” Monnot said, “We are in a very competitive district and our players have competed very well against these established programs.” Monnot notes that this team has scored the most goals (36) in the history of the program. “We have a great group of kids and a strong coach that will continue to move the program forward in the right direction.”