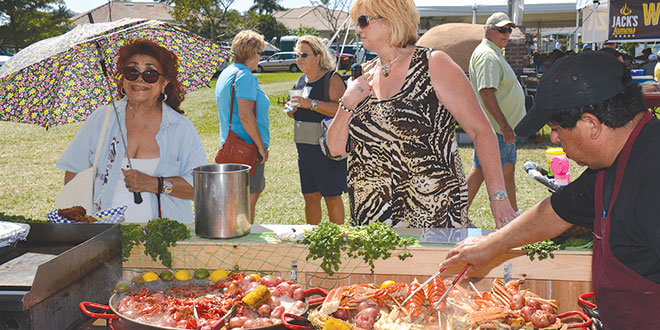 First, the schedule is different with a new Friday-Saturday line-up. Second, there is an additional culinary theme — barbecue — and a rock ’n’ roll musical act has been added. Finally, the festival’s marketing plan has a new look, which attracted a new, high-profile sponsor, Acura-North America. The car maker will be at the festival offering test drives.

“We are very excited. We’ve really reinvented ourselves this year,” says Dianna Dohm, the director of the festival who heads up marketing. “We have more sponsors than in the past…Acura actually contacted us, and told us they found us on Facebook and the web. We are reaching an audience that we have never reached before, and when people start calling us, we know we are doing our job.”

Part of that job included revamping the festival’s logo to include a fresh seafood band partaking in the festivities. It also included changing the festival’s usual Saturday-Sunday schedule. This year’s festival will be held Friday and Saturday, March 28-29, 11 AM-9 PM. According to Dohm, attendance at the event has held steady — between 9,000-10,000 — for the last four years, but festival officials noticed that attendance numbers on Sundays were traditionally low.

“We watched attendance trends,” she explains. “We evaluated attendance by the hour, and we found the bulk happened on Saturday.” So, officials shook up the schedule for 2014, adding Friday and eliminating Sunday altogether.

Subsequently, a Friday night musical headliner was needed to compliment the down-home country flavor of Saturday’s musical entertainment, Fakahatchee Band. Enter Satisfaction, a Rolling Stones tribute band. Satisfaction will take the Seminole Casino-Immokalee Stage at 7 PM on Friday, and Fakahatchee will works its musical magic Saturday beginning at 6 PM. Other musical acts will play throughout both days starting at 1 PM.

The final alteration incorporates barbecue into the event’s menu of high-quality, fresh seafood and traditional festival fare of pizza, lemonade, popcorn, ice cream and various beverages. The festival also will include 60 arts and crafts vendors and a Kids Zone, completed with a Bungee Bounce, rock climbing wall and s jump house.

Admission is $8 for adults, and children 12 and under are free. Organizers recommend visitors bring blankets and lawn chairs to set up for the concerts, but coolers and pets are prohibited.

As always, proceeds from the festival will be split between the three organizing entities. Dohm notes that last year’s festival raised about $60,000 between entrance fees and scholarships, allowing each club to net about $20,000 to be used for their service work. “It all goes back into the community,” she says.