Merrill Allen Thanks You: Music is his life. Goodland is his town. 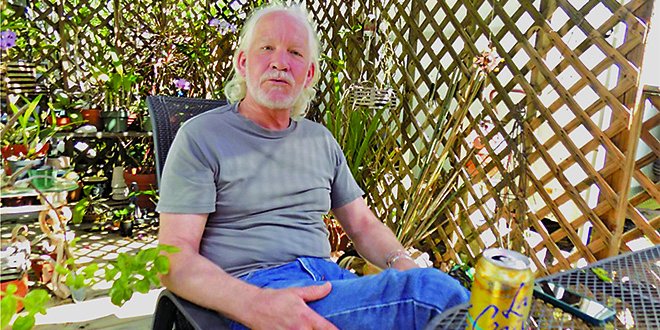 If you should happen to greet Merrill Allen on the streets of Goodland, you might be surprised at the warmth and friendliness of his response. He says he has found fulfillment and happiness here. Merrill, who was born in Grantsburg, Wisconsin in 1957, moved to Goodland in 1993 and never looked back. He has become part of the lore of Goodland, and has entertained thousands throughout Collier County with his guitar and mellow baritone voice. Growing up in Portage, Wisconsin, Merrill idolized Jim Allen, his big brother, 12 years his senior. (They now live around the corner from each other.) At the age of five, Merrill recalls listening to Jim’s impromptu serenades around the house. “Jim was singing and playing sad songs on his guitar – songs like ‘Cool Clear Water,’ ” Merrill recalls, “Those songs made me cry.” Two years later, Jim was drafted into the army and deployed to Vietnam. Before going, he gave one of his guitars to Merrill. He left Merrill with some advice, which he thought would get Merrill going on the guitar. “Kid, learn how to play this and the chicks will dig you” Jim said. “[Jim’s advice] was true to a certain extent,” said Merrill, “but I never learned how to play his guitar.” Jim never gave up in his little brother, however. After returning from Vietnam, Jim began performing in Minnesota and became part owner of a music store there. On one of Merrill’s frequent visits, he gave the 13-year-old Merrill his first new guitar, a Harmony Sovereign. “That was a beauty,” recalls Merrill, “I really wanted to learn how to play it. I bought a chord book and got to the point where I could recognize the chords. Every time I visited Jim, I was able to show him something new. I memorized all the chords to ‘House of the Rising Sun’ and finally could play all the right chords in the right place. It was a big breakthrough for me.”

Merrill graduated from Portage, Wisconsin High School in 1975. While there, he immersed himself into the program of music director Clifford Griebel, to whom he credits his transition from a music dilettante to a devotee of the genre. “I joined every music program which the school offered,” said Merrill, “Whether in jazz band, accompanying boys or girls groups, or vocals by myself, I was totally hooked and committed. I had to learn a lot more chords. Mr. Griebel taught me to improvise. That’s how I learned. I never had any formal training.”

After high school, Merrill spent his summers with Jim, in Minnesota. “Jim’s band had been voted best dance band by the Ball Room Owners and Operators Association, 10 years in a row,” Merrill recalled. “I loved hanging out with them. I got to watch their country rock shows and was paid $15 a night to tear down the stage after the shows. I learned how to play ‘Long Train Running’ by the Doobie Brothers and ‘Stairway to Heaven’ by Led Zeppelin.” Finally, Jim talked 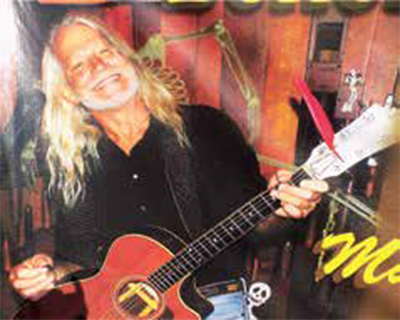 Merrill into performing “Stairway to Heaven” during a break. “I was terrified but did it anyway,” said Merrill, “It went over pretty well and showed to me that I actually could do this.” At an earlier performance by a two-man acoustic guitar band at the Wisconsin Dells, Merrill was enthralled by their performances of Neil Young and James Taylor. “When I saw that you could make a living playing a guitar, I knew that is what I wanted to do.” Now he felt that he could make it work.

Merrill started out moonlighting in bars while working at 3M in Hutchinson, Minnesota and later while taking water samples for CETA, a federal government agency. He was performing every weekend. “Any time I tried to do anything but play music, I wasn’t happy,” he said. After CETA cut its work force, the money ran out, and brother Jim again stepped up, introducing Merrill to the manager of a St. Cloud, Minnesota ski lodge, where Merrill met the owner of the Ground Round Restaurant chain, owned by the Howard Johnson Corp. He was subsequently booked into Ground Rounds all over Minnesota, but primarily in the Minneapolis-St. Paul area. He started out at $75 a night being booked for a week at a time. “Every new booking brought a raise.” Merrill said, “I was more or less working full time at this – working the circuit. My goal was to work less and make more.” Merrill added Hank Williams, Johnny Cash and Willy Nelson to his repertoire. Merrill knows over 1,000 songs today, but only knew about 15 or 20 songs when performing at the Ground Round. “The crowd would turn over between performances [after finishing their dinner],” Merrill recalls, “You could get away with playing the same songs over and over.” Riding his success, Merrill added Holiday Inn as a client. He was playing a lot of Minnesota college towns and was enjoying it. “The harder I worked, the luckier I got,” Merrill mused. Despite his success, constant travel in the harsh Minnesota winters was taking its toll. “The winters were getting too long,” Merrill said, “I decided to go south.” A friend, Scott Nelson, had been bussing tables at the Little Bar Restaurant in Goodland, and Merrill agreed to meet him there.

Merrill walked through the doors of the Little Bar Restaurant on December 1, 1993. It was noon and the owners weren’t there yet. Merrill, guitar in hand, introduced himself to the personnel who were there. On their invitation, he played a couple songs in the bar. “The patrons seemed to like it and I was getting tipped.” Merrill said. “The owners (Ray Bozicnik and Nikki Bauer) arrived and asked me if I could play that night.” The next morning, when picking up his equipment, Marla, the bartender, told him some places he should call. One of them was the Barge Marina, at the foot of the Goodland Bridge. Merrill went right over and applied for work. “The marina was running weekly trips to Key West on a 100-foot boat,” Merrill said, “They installed me in a 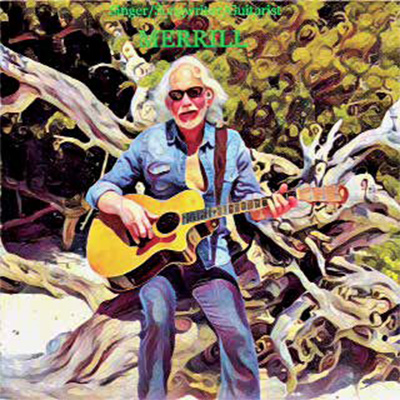 cabin and I entertained their customers during the trips. It was a full time job, seven days a week.” Four years later, some bad storms prompted Merrill to look ashore for work. He had no trouble finding it. “Compared to Minnesota, it was easy finding work here,” said Merrill, “It wasn’t long before different clubs were asking me to play. I was making good money.” There followed a succession of gigs on Marco Island (Snook Inn, Radisson, Rookies, Little Bar) and in Naples (Comfort Inn, Bayfront Inn on 5th, Riverwalk at Tin City), where Merrill lived on a houseboat for a while. In 2005, Merrill moved to Goodland to be closer to his girlfriend, local artist Celeste Navarra, and to work at his favorite place – the Little Bar Restaurant. Things continued to go well for him and gigs increased, particularly at the Little Bar where he was a local favorite and Sunday evening regular. And then, on September 7, 2015, disaster struck.

On that date Merrill was reported to have suffered second and third degree burns over 60 percent of his body, while cooking on a gas stove in the cabin of his 39-foot sloop. Ironically his sloop was moored at Moran’s Barge Marina, where he had his first gigs in 1993. He was airlifted to Lee Memorial in Ft. Myers, and then to the burn center at Tampa General. It was then that Merrill learned of the depth of the affection and esteem with which he had come to be regarded in Collier County and beyond. “Every day, a stack of cards was delivered to my hospital room,” Merrill said, “Many of them were from people I didn’t know. They kept coming, day after day. It was overwhelming for me.” Within a couple weeks of the accident two fundraisers were held for Merrill, one at Angler’s Cove, Port of the Islands, and the other at the Little Bar in Goodland. Hundreds participated. Merrill came home to the loving care of Celeste Navarra a little over a month after the accident. He is working his way back into his beloved music performances. Now, he wants to thank all who helped get him through this. “I am deeply grateful and humbled, by the support of the many friends I didn’t know I had,” Merrill says, “The cards and letters which were delivered to my bedside every day were a source of wonder and amazement to me, that so many people would take the time to do this. It eased the pain to know that this was happening. I looked forward to the mail every day. I want to thank everyone for taking the trouble to lift me up in those awful days. It was and continues to be inspirational to me.” Merrill is now doing just fine. You can still catch him Sundays at the Little Bar.

4 responses to “Merrill Allen Thanks You: Music is his life. Goodland is his town.”