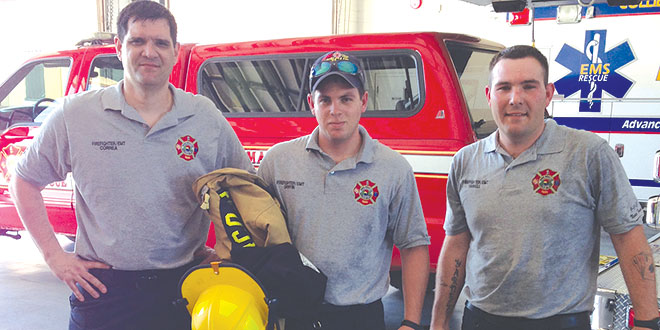 Three short months after the Marco Island City Council approved the hiring of three new firefighter-EMT’s, they have been hired, trained and are on the job. Twelve-year firefighting veteran Alex Correa and Naples-born-and-raised newbies Eric Griffin and Jesse Yarnell joined the department earlier this month.

And, despite coming on board at the end of season, all three men have been busy, already answering several challenging calls, Byrne notes. (Reporter’s Note: I can attest to this, as although interviews with the new personnel were prearranged, two of the three new hires were out on calls when I arrived to interview them.)

According to Byrne, each man brings his own special skill and experience set to the MIFRD, along with the required certifications and licenses: State of Florida Firefighter Certification, State of Florida Emergency Medical Technician (EMT) license and any additional training such as an Emergency Vehicle Operator course. The interview process also revealed certain qualities in each candidate valued by the department, such as hardworking, honesty, excellent background and an understanding of customer service.

For example, Yarnell — an internal candidate working for at the reverse osmosis plant for Marco Island Utilities for the last six years — stood out because of his desire and effort to become a certified firefighter and EMT all while working full-time for the city. Byrne notes that Yarnell was well regarded by his supervisors and co-workers with the utility and had an excellent work history.

“Many of my friends are firefighters, and I knew this is where I wanted to be,” Yarnell explains. “I always wanted to do this.”

With just a couple of weeks under his belt, his excitement remains contagious: “It has been fantastic. I am learning so much.” He also is looking forward to expanding his education to become a full-fledged paramedic, which requires one additional year of schooling and about 10,000 hours riding in an ambulance.

Then there is Eric Griffin — a 23-year-old former Marine who served a six-month tour in Afghanistan as a team leader for aviation ordinance. “Eric is an impressive young man,” says Byrne. “He had tremendous responsibility in the Marines and was decorated for his efforts. Upon completion of his military service, he completed Fire School and EMT school, again all to serve his community. We are proud to have him and proud of his service.”

While his position with the MIFRD his is first as a firefighter-EMT, Griffin says he always wanted to be a firefighter: “No two days are the same, and you are always learning.” He feels fortunate to a part of a tight-nit fire department filled with long-serving firefighters from whom he can learn and become more competent in the field.

Finally, Correa comes to MIFRD after serving 12 years combined with the Immokalee Fire Control District and the Isle of Capri Fire and Rescue District. “While working for Isle of Capri, (Alex) served the citizens of Marco Island very often so we got to know him very well,” Bryne says. “We found him hard working, very dedicated and well respected among his peers. He has a terrific life story having been brought to the United States with his family from Cuba as a young boy, going to school, learning English and progressing through his life eager to serve his community.”

“I was lucky to get the interview,” Correa notes modestly.

Correa’s resume is peppered with examples of his devotion to community service and selfless acts of kindness and bravery — whether his willingness to take a voluntary lay-off so another firefighter could keep his position with the department in Immokalee or his willingness to put himself in harm’s way to save the life of another.

In fact, Correa was well decorated for acts of bravery while working in Immokalee, when he pulled then 16-year-old Wilder Vasquez out of a trailer engulfed in flames on the morning of March 4, 2007. Vasquez was among 10 people trapped in the trailer on lot 18 of Cleve’s Trailer Park that morning, and he was one of the five survivors thanks to Correa.

Currently, each of the new hires is working under a 12-month probationary period, and during this time, they will be evaluated on their ability to learn and fit into the MIFRD. So far, so good, notes Byrne.