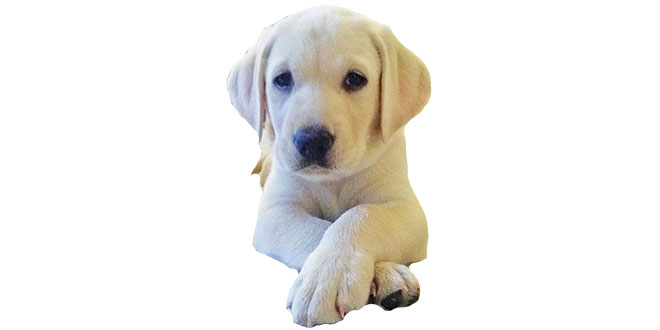 Breezy was welcomed into the Coastal Breeze family in September. He is a yellow Labrador puppy that has boundless energy.

You should know in August, two days shy of his 13th birthday, my family had to put our beloved black lab, Bo, down. His full name was J.T.’s Mr. Bodacious. It was difficult on the family, as our daughters grew up with Bo by their side as their guardian, playmate and defender.

A few months after Bo’s departure from our lives, I began to half-heartedly look at the Humane Society and Domestic Animal Services websites and in the papers for another dog. Twice, we almost gave in to either cuteness or price, but for some reason or another we didn’t jump quickly enough, and the dog would be gone before we got too serious. We checked out other rescue operations, but eventually decided we were willing to train a young puppy.

Price seems to vary with color, yellow, black and chocolate, in that order. We found Labradors from $1800 for full-bred pedigreed AKC registered pups to $150 for older dogs whose owners wanted to “rehome” them for some reason. One “farm” offered puppies for $800, but as it got closer to Christmas, the price rose incrementally to $1200 for pups from the same litter. To their credit, the breeder socialized the puppies, playing and petting them each day which goes a long way towards having a healthy and happy adult dog. I let them fall off my radar eventually as too far a distance to travel for a puppy.

When looking for a puppy, beware of scammers! There were so many cute puppies on Craigslist! One caught my eye as it sounded too good to be true. Full-bred, AKC-registered for only $250. Once I emailed them, they 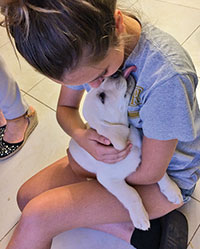 responded by sending me a photo of the cutest lab puppies you could imagine. They were adorable! The contact then began to write me for a deposit, but something they said didn’t seem right. So, I did an image search and found the exact same image on a webpage for a reputable breeder. These pups would be much older by now, and they weren’t in the same location.

Turns out it was a scam! Yes, I did report it. Nothing like a cute photo of puppies to extract money from an unsuspecting, warm-hearted person looking to make an addition to their family! Although the ad was removed, keep in mind a new one probably showed up a day later to lure in the next person wanting a pet. Be wary, and do your due diligence!

Eventually, we chose a yellow lab from a breeder not far from here. It was an AKC-registered litter; they kindly answered all of my questions, and there was no pressure. We sent a very small deposit, so if everything wasn’t right upon inspection, it wasn’t an issue to walk away. Once the deposit was received we could “choose” which pup in the litter we wanted. We chose the only male with a black nose. Now, we had to wait until the puppy was old enough to come home. We could visit if we wanted, and the breeder sent us photos whenever we asked.

Finally, the day came when we could bring him home. We checked out his parents on property. They seemed like nice, healthy dogs with good personalities. Some of the pups had collars on and some didn’t. When a puppy was chosen they put a collar on it, simple. We were allowed to change our mind, of course, but it was 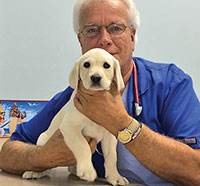 love at first sight. One lick across my daughter’s face by this cute bundle of wiggling, wagging puppy was all it took to melt our hearts. No one could resist! No changes, nope! This was definitely the puppy for us! So, we got in the car, stopped to borrow a crate from a friend and headed home. Now, we had to inform my husband and older daughter!

We put Breezy in a duffle bag with his little head sticking out and brought him into the kitchen and put the bag down. With a bit of apprehension we yelled, “Guess what we got?” Again, Breezy’s wagging and wiggling and licking melted hearts amid the screams of delight! Welcome home, Breezy!

First order of business was a full vet check and immunizations. Local veterinarian at Island Animal Hospital Dr. James Bowen gave Breezy a thorough examination. All seemed good. Dr. Bowen then asked me if we had a certificate for Breezy’s hips. Now, I considered myself an educated dog owner. How could I not ask for certification the parents did not have hip problems? This faux pas can be a bitter one. You can fall in love with a puppy, and within a year, watch it suffer painfully with hip dysplasia. Certain breeds, like labs and shepherds, are prone to this. If you’re looking for a specific breed, you might want to familiarize yourself with that breed’s common ailments. You may also ask what health guarantee is offered if going to a breeder.

Interesting to note, we were given a discount as the litter of puppies had not had their first set of shots. Once weaned, a puppy loses his or her mother’s immunities. This isn’t a problem unless you were hoping to socialize your pup with other dogs early. 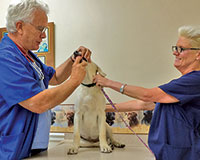 At this point, Breezy is assimilating well into the household. He bites and scratches his way through each day. He came with only a few factory settings: 1.) chewing and biting; 2.) peeing and pooping; and 3.) eating and sleeping. Our days go like this: Breezy wakes and begins his favorite activity — bite, bite, bite, bite, bite, bite, while we are yelling, “No! No! No! No!”

He’d go outside and comes back to chew, chew, chew. Add a couple more bites and some more “no’s,” then, it is time to eat. Of course with an attention span of a fly, that means two bites and off to something else! All this before 8 AM.

Keep in mind a young puppy has razor-sharp teeth and claws like little daggers (watch out for the extra sharp dew claws, too). My hands and arms have the wounds to prove it! I must admit several weeks have passed and the nipping is subsiding, being replaced by jumping.

Breezy came into our home before Christmas, and what fun it was putting up a “dog proof” Christmas tree. No matter how many times you say, “Don’t put the good ornaments too low,” someone does (me, in fact). By this time, Breezy has learned to grab something he KNOWS he shouldn’t have, and he RUNS away real fast. What fun it is to extract a shoe or an article of clothing or food from a dog who has a death grip on it, all while trying to protect your fingers from a mouth 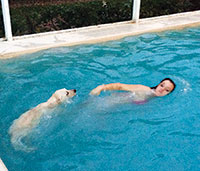 Adding to the fun of this “grab and go” game was a round Christmas tree in the middle of the room. He is such a smart dog; it took a millisecond for him to figure out he could grab an ornament, and when I took chase, he would run around and around and around the tree. Having played this game a number of times, I stopped in my tracks in the back of the tree and surprised the heck out of him! He couldn’t stop on a dime, and HA!, he was in my arms. Of course, it only happened once; after that, he started being cautious, keeping a good distance to see if I’d change direction or stopped. Sneaky boy!

Chew, chew, chew, bite, bite, bite, pee, pee, pee — all day, every day. A puppy knows absolutely nothing of their bodily functions. It takes a while to train them to realize, “Hey! I have to go” in enough time to actually make it outside. Once the puppy realizes he has to go, now you have to train him to TELL YOU he has to go!

All in all, even with wet feet from slippery, surprise puddles, bite and scratch marks on hands and arms, almost EVERYONE loves Breezy! We certainly do, and we’re happy we chose him to be the mascot for Coastal Breeze News. It’s funny because I was told a morning television news show recently added a mascot to their line-up which looks JUST like Breezy! Hmmmm, wonder where they got that idea? You will be hearing more about Breezy, and his escapades, in future editions.